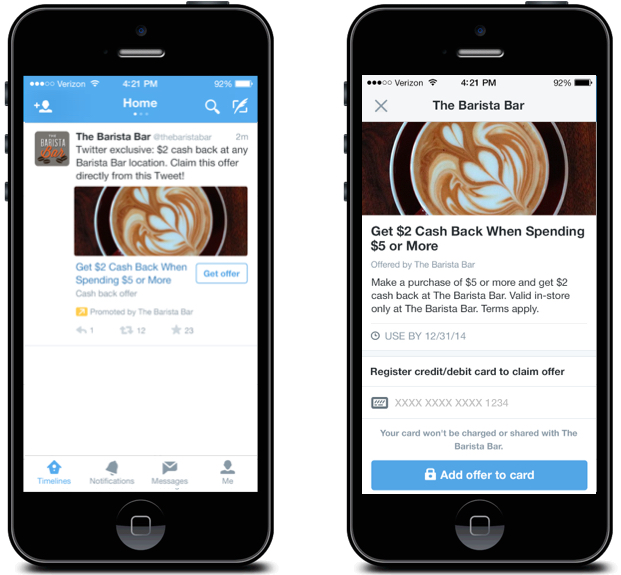 Created in partnership with a handful of brands which will begin testing the new feature during the holidays in the United States, Twitter Offers makes grabbing a coupon as easy as clicking a button in a Promoted Tweet.

The feature works just as you would expect.

As illustrated below, you can add a Twitter Offer to your credit or debit card and then redeem it immediately by using that card at the store.

“Because the offer is tied to their card, redemption is seamless and easy: there are no coupons to redeem at the point of purchase,” boasted Twitter. On the downside, the coupons aren’t immediate. Any cash back savings after the purchase will appear on your credit or debit card statement ”within a few days.”

“If you aren’t one to revisit your statements weekly, that could lead to revelations weeks or months later that the big discount you thought you were getting doesn’t apply,” notes SlashGear writer Nate Swanner. “It might also lead to issues in-store, where customers are expecting purchases to reflect discounts immediately.”

Twitter Offers are presented as Promoted Tweets and advertisers can attach redemptions directly to their campaigns, even when redemption happens offline. The good news for participating merchants is that they can continue using their existing payment solution for Twitter Offers.

Those concerned about the security implications of storing credit or debit cards with Twitter should rest assured that the company will encrypt and safely store your payment information to make it easier to claim other offers or make purchases on Twitter in the future.

Yes, Twitter is becoming a payment processor of sorts.

After previewing future platform enhancements and features during its recent Analyst’s Day event, the popular micro-blogging platform unveiled the ability to privately share tweets in direct messages, attach photos to DMs, buy products directly from tweets and an advanced search feature allowing you to search through its entire archive of public tweets sent since 2006.

Sadly, the firm has been clamping on third-party Twitter clients for quite some time now. According to Twitterrific 5 developer, Gedeon Maheux over at the Iconfactory, that app may never see a major update on the Mac App Store due to Twitter-imposed limits on API tokens for third parties.