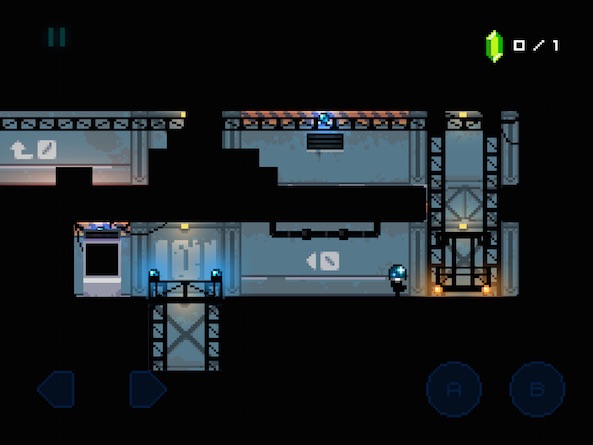 For me, there really is nothing better than a good, old-fashion side-scrolling platformer. As a kid, those were the types of games that first got me into spending all of my quarters at the local arcade. Although gaming technology has improved and the mechanics have gotten more advanced, I still love the 2-D world of my past.

Space Expedition: Classic Adventure is just that, a classic adventure. As a lone astronaut on a research space station, players must uncover the events that led to its abandonment. We’ve got a full game review of Space Expedition for you right now.

The graphics are retro with mid-level pixelation. Even though you are looking at low-resolution illustrations, it is higher than 8-bit quality. The color palette is intense with reds, blues, purples, and yellows splashed across the screen.

Most levels put you into a tunnel setting, which means much of the screen is in black with only the moveable spaces lit up. On some levels, the lights have gone out and you are only able to see the surrounding environment in front of you, which can be creepy when you hear the growls of an alien monster nearby.

Players must perform certain actions on different levels, including figuring out how to turn on the elevator, or escape from bolts of electricity. Before each major task, there is a checkpoint. So, if you reach one, be ready for some action shortly thereafter.

Players control the astronaut using a left and right arrow on the left side of the screen, as well as two action buttons on the right.

The soundtrack is almost peaceful, but also ominous at the same time. It adds atmosphere to your space adventure and even warns of danger nearby. 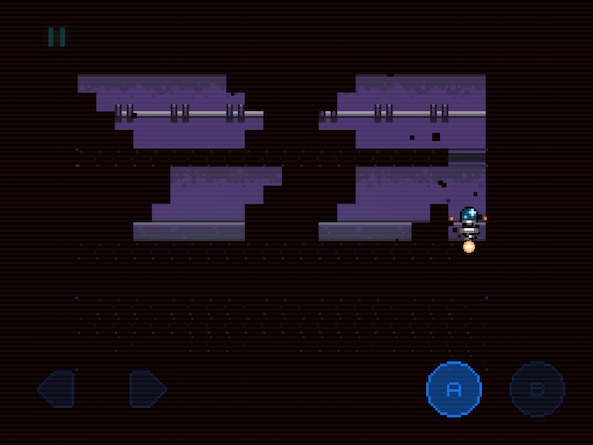 The game begins with some text explaining the situation. Players must find out what happened on the space station. Some radioactive materials and an accident caused mutations in creatures that turned them into monsters. The first level is dedicated entirely to teaching you how to move, pick stuff up, activate things, and use turrets.

Once on the space station, players walk from one scene to the next, finding clues. When you do find one, text will appear on screen as a journal entry from one of the members of the research team. The note will give you small bits of information about the events.

As you move around, you’ll be able to break through the black tunnels simply by running through them or jumping up. Sometimes, you’ll accidentally fall through a loose patch into a lava pit and have to start over, remembering where that hole was. On some levels, the dirt below you will begin to break away slowly and you must get across a chasm before it falls apart, dropping you into the abyss.

Each level has hidden gems on them. They are always hidden in secret rooms that you must find by breaking away the dirt in the black tunnels. At the end of the game, the number of gems you’ve collected will be tallied and added to your score.

On some levels, your ability to move quickly is the most important aspect. A giant spider may chase you, or lava may be filling up inside the tunnel you are in. One mistake or missed jump and you’ll be toast.

At times, you’ll be tasked with shooting down attacking monsters while trying to activate machinery. This fast-paced action does not happen very often, but when it does, it pushes your limits.

For the most part, this is an explorative game with minor challenges. The tasks are not particularly difficult to achieve and finding missing items are not very hard. However, seeking out the hidden gems adds to the enjoyment. Don’t assume you’ve accomplished all there is to a level. Chances are, a hidden gem is still waiting to be found. 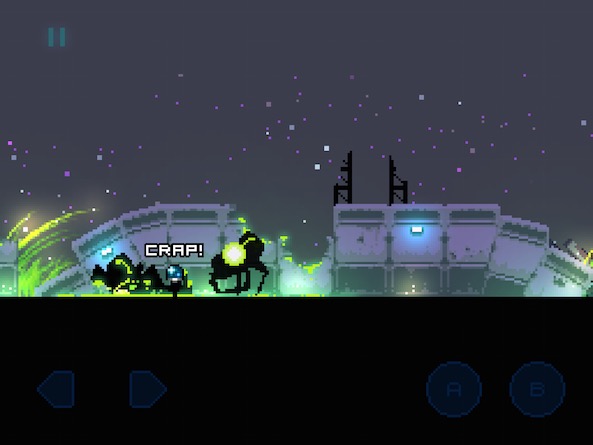 This game, although fitting into the platformer genre, is a casual game at heart. It does not require much of your time and won’t ask for too much exertion.

This game is definitely too short. Even though you can replay levels over again in an attempt to find the hidden gems, there are only seven of them. It took me less than an hour to get through the entire game without searching for gems.

Space Expedition: Classic Adventure costs $2.99. In today’s mobile world, that is a premium price to pay for such a game. Because there are only seven levels, I can’t call it a good deal. The replay value is medium. You will want to replay every level until you find all of the gems, but once you’ve done that, there is nothing else to do. The game ends with, “To be continued…” so, my hope is that there are more levels to come in the future.

If it weren’t for the price, combined with the length of time to get through the entire game, I would definitely recommend it to fans of platform titles. However, I know that mobile gamers expect a lot more for their three bucks and would consider the cost to be too expensive. If you don’t mind throwing down a few dollars on a short game, it is fun and worth your time. Hopefully, the developers will add more content, increasing the bang for our buck. This game is available on the iPhone, iPad, and iPod touch. You can download it in the App Store today.

Although the mechanics are completely different, this game has a similar aspect to Skullduggery!

What do you think of Space Expedition? Does it remind you of games from your childhood, too? Let us know in the comments below.