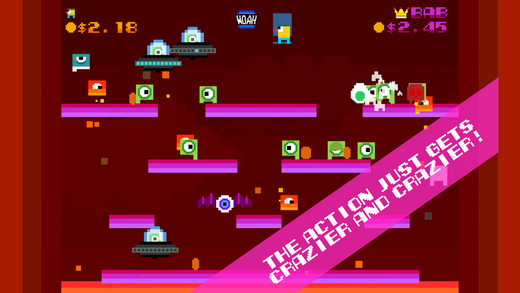 Retro games are a big deal in the App Store. I personally love those fantastic 8-bit games from my childhood. I know that technology has made it possible for our video games to look like movies now, but I have a spot in my heart for those pixelated power ups that I grew up on.

Woah Dave! is a retro style game that pays homage to the classics. Not only does it look like it came out in 1982, but the choppy, blips and bleeps of the soundtrack really take you back a few decades. 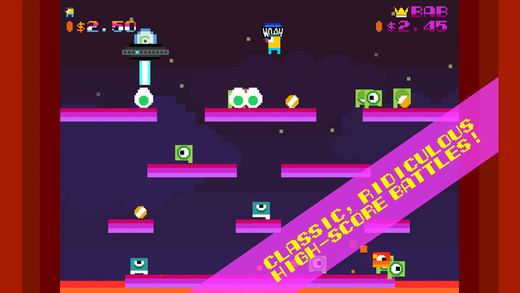 Players are in control of a big-nosed yellow pixel pal that is trying to keep the path clear of hatching monsters. To do so, you must grab an egg and toss it into the lava pit below, throw it against another egg to destroy them both, or hit it with an exploding skull. After you successfully destroy an egg, or a monster if it comes to that, you’ll be able to collect coins in their place. Each hit is worth one cent, so you won’t be making the big bucks here.

Players run from left to right on the stationary screen using the virtual control buttons. The level is made up of a series of well-placed platforms that keep Dave from falling into that lava, but platform jumping is the least of his worries. 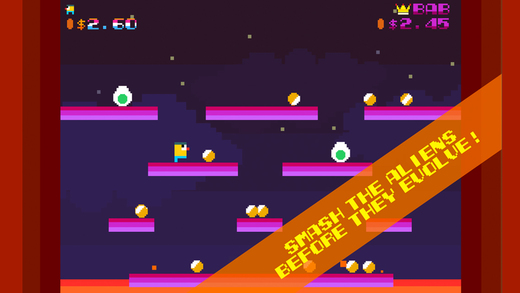 Monster-filled eggs fall from the sky intermittently. You must destroy the egg before it hatches. You’ll know when it is too late because the egg will start to blink. If you don’t destroy the egg in time, it will turn into a monster and you’ll still have to kill it, only it won’t be as easy because the beast can bite back.

The game keeps going with new eggs, skulls, and “Woah Bombs” falling from the sky the whole time. Throw skulls and Woah Bombs at eggs and monsters to destroy them. You’d better not be holding one of these items when it explodes or you’ll go down with it. Players have three lives, after which the game is over and you get to put your three-letter initials on the board.

Probably the best part about this game is that it is MFi compatible, so you can connect your arcade controller and play the game on your iPhone the same way you would on a console game from back in the day.

Woah Dave is available on the iPhone, iPad, and iPod touch for $1.99. Download it in the App Store today.