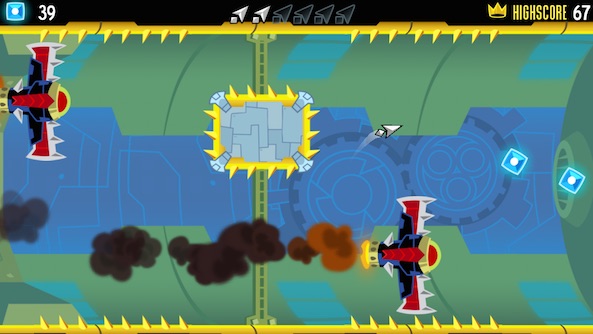 The game development team at One Man Left is known for creating fast-pasted, action-packed arcade style games. You may be familiar with their previous titles, Tilt to Live and Tilt to Live 2: Redonkulous. Well, they are back with a new game for your cramped fingers to try out.

This third installment features some familiar elements from the previous two Tilt to Live titles. For example, you are in control of a tiny arrow as it flies through space. You are constantly bombarded with all manner of spikes, ammo, and other such destructive objects. The energetic soundtrack fills you with a sense of dread, knowing that you are about to enter a world of hurt.

Instead of roaming around on a stationary screen like the first two games, this one has you working your way through a gauntlet of torture devices (as the name suggests). Maneuver up, down, around, and through a barrage of spikes, saws, molten lava, kamikaze planes, and more.

Each gauntlet features a different theme, but keeps the overall game mechanics the same. So, you can start off on the first, second, or third course and feel the same level of attack on all. Actually, that’s not true. Each level does get increasingly harder, but you are more familiar with the attack, so it seems easier when you start.

The controls are tilt-based. You can choose from three different control options, regular, top-down, or custom. Depending on your style of gameplay, custom might be the best option. I found it to be better than the other two. 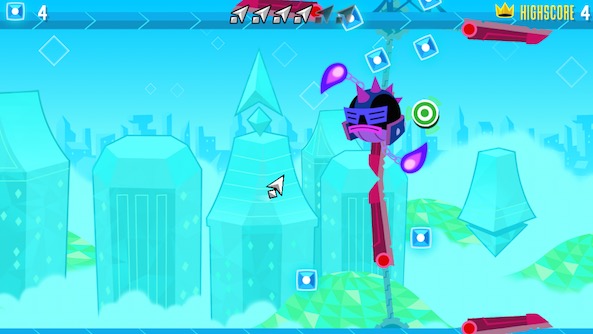 Your goal is to get through the gauntlet alive. You have five lives, which you will probably use up right away. Every wall is covered in spikes. Every scene is populated with lava-firing cannons and flame spewing monsters. Just when you think you are getting a break from it all, you are attacked from all sides and angles again.

Your arrow moves forward automatically, but you have control over how it moves. You can even race forward or fall back, depending on where you want to be at any given moment. Tilt the screen in the direction you wish to go. It’s pretty simple.

Except that it is not. There is no getting away from the barrage of enemy attacks. Even if you are lucky enough to avoid the fly-by propeller planes, you have to dive to get around spiked poles or duck to avoid missile attacks.

In addition to overcoming the impossible gauntlet challenge, players can collect crystal coins called “pointonium” which appears and disappears at random places. These strings of shiny stuff are constantly on the move. If you chase after them, you’ll risk running into something deadly.

Each gauntlet also has three missions. The first is to actually finish. The second is to collect 150 pointonium crystals. The third is to make it through the entire obstacle course without dying.

I played the game on easy mode and never collected more than 60 pointonium crystals. I didn’t survive past the first checkpoint on any level and didn’t even make it to the first check point on the second and third gauntlet. Did I mention that the game is hard? 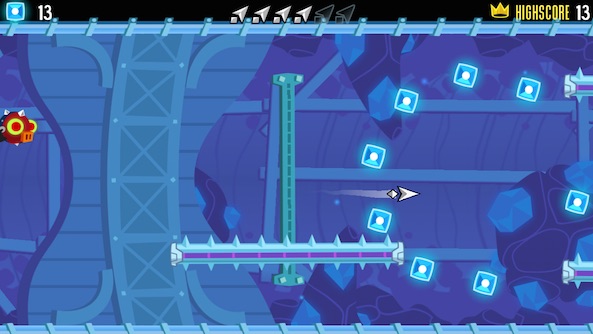 Just like One Man Left’s other games, this fast-paced action arcade game is fun and exciting. This title stands out from the others in the series for being a completely different type of game. Instead of moving around on a stationary screen, players move along a side-scrolling course. At the same time, however, it is cut from the same cloth.

I had trouble setting the custom tilt controls. When I tried to set the arrow, it would sometimes be pointed upward instead of facing to the right. If I tilted the screen to get the arrow to point the correct direction, it would offset the way I held my iPhone. I had to reset the custom controls fairly often.

Tilt to Live: Gauntlet’s Revenge costs $2.99, which is the same price as the company’s other games. And, just like the others, this title is worth the premium price for the hours of gameplay it provides. The replay value is through the roof since you are highly unlikely to succeed at the achievements the first time through.

Fans of the series will already know that this is a big win for One Man Left studios again. If it doesn’t end up as one of Apple’s year’s best games, I’ll be surprised. It is fast-paced and lots of fun. It provides a completely different gaming experience than the other two titles in the series while giving players a sense of familiarity. This game is available on the iPhone, iPad, and iPod touch for $2.99. Download it in the App Store today.

Are you a fan of One Man Left games? Will you be adding this to your games folder?