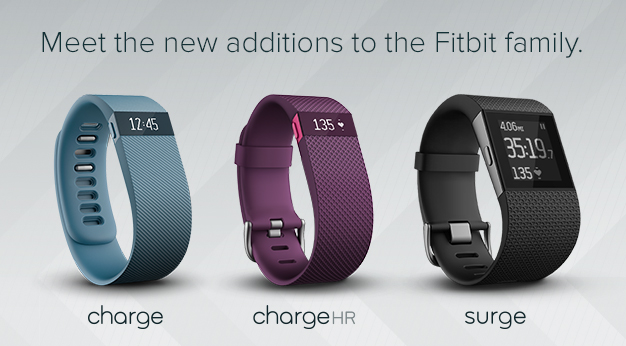 After recalling its rash-inducing Force wristband back in February, FitBit on Monday launched a new family of activity trackers, the FitBit Charge and Charge HR, while making its first foray into the smart watch space with the FitBit Surge fitness accessory.

As for the Fitbit Surge, this $250 fitness watch packs in a total of eight sensors for more detailed logging of activities such as running and working out. Jump past the fold for more details.

”Your fitness superwatch,“ the Surge has built-in GPS to measure distance without the need to tether to a smartphone or a tablet. Taking data from as many as eight sensors — a tri-axis accelerometer, gyroscope, compass, ambient light sensor, GPS and heart rate — the Surge enables continuous heart rate and all-day activity tracking and sleep monitoring.

And because the Surge files as a smartwatch, it lets you stay connected with text and call notifications (requires a smartphone connection), music control and more.

Outfitted with a battery that lasts seven days and featuring a revamped design, the FitBit Charge is a comprehensive activity tracker that will log your runs and measure calories burned, floors climbed, distance travelled and steps taken. The accessory has a power-efficient OLED screen and, unlike the original Force, it also monitors your sleep and features a Caller ID function.

The Charge is available now in exchange for $130.

The Charge HR, an improved version of the Charge, contains FitBit’s PurePulse heart rate sensors to provide all-day tracking of your heart rates and various physical activities. It also monitors your sleep and features the Caller ID function.

Finally, FitBit’s iOS app has received an update today with several new features, including Fitbit Challenges, better calorie burn tracking and analysis and the ability to request the item be added to the database when a scanned barcode isn’t found.

The company said its mobile app will receive another update to include heart-rate measurements.

The San Francisco, California headquartered privately held startup is finding itself increasingly at odds with Apple. After announcing that it won’t be supporting Apple’s HealthKit platform for the time being as it aims to focus on its own platform, the iPhone maker is now said to be considering pulling Fitbit devices from its store shelves.

Anyway, how do you like these new FitBit trackers?