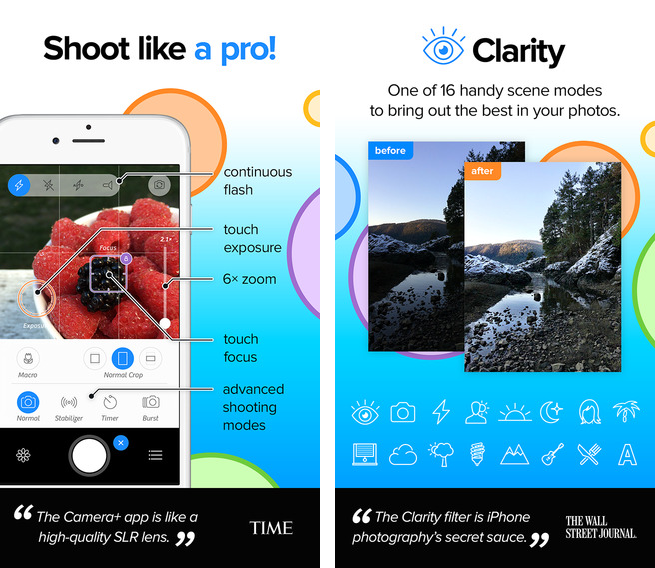 Camera+ by Taptaptap has received a newsworthy refresh Monday that has brought back iOS 7 support killed in the previous release while enabling a new Auto setting for the front flash feature.

More importantly, Camera+ 6.1 introduces a Pro quality setting that lets those who are serious about iPhone photography save their snaps in the TIFF image format using lossless compression.

As if that weren’t enough, the team teased “some big things coming down the pipeline” for both the latest iPhone edition of Camera+, along with “a huge, long-overdue update” for the iPad version.

First off, you’ll find a brand new Pro quality setting in the app’s settings. Enabling it tells the app to save your snaps in uncompromised quality, in the TIFF image file format using lossless compression.

Until Apple delivers support for the RAW format to iOS, TIFF remains the highest quality image format available to iPhone photographers. A few other top tier camera apps in the App Store have long supported TIFF so Camera+ is playing a catch up, but better late than never.

Note that you’ll need a decent amount of free storage available to save hefty TIFF files so maybe you should use the TIFF option only for “those extra-special shots where you want the utmost in quality”.

They’ve also juiced up the Front Flash feature for taking selfies, which now comes with an Auto setting allowing your device to determine whether it should be on or off. Of course, your iPhone doesn’t really have flash out the front so what this does is paint the screen white for a fraction of a second before the shutter-release.

This effectively lights up your face in darkness, as seen in PhotoBooth on the Mac.

Camera+ received a massive update a month ago, receiving a tweaked design and full iOS 8 support with manual shooting modes and controls, an awesome extension allowing you to edit snaps in the stock Photos app with Camera+ and lots more.

However, the team inexplicably made that update iOS 8 only, a decision that immediately backfired because not everyone is on Apple’s latest and greatest mobile operating system yet.

Having realized their mistake, developers have reversed their stance so Camera+ 6.1 now works on iOS 7. Keep in mind that none of the iOS 8 specific benefits are available to iOS 7 devices, stuff like manual camera controls, a new macro shooting mode and the Photos extension.

Sadly, the app has not yet received native support for the new iPhone 6 and iPhone 6 Plus screens.

Camera+ is currently on sale for the first time in over a year, as part of the App Store’s Explore Your Creativity promotion, so this is your chance to grab it for $2.99 before the price goes back up.

Better yet, if you have the official Apple Store app on your iPhone or iPad (not to be confused with the App Store), you can actually grab Camera+ free of charge through Apple’s shopping app — the first time ever this finely done photography software has been offered for free.