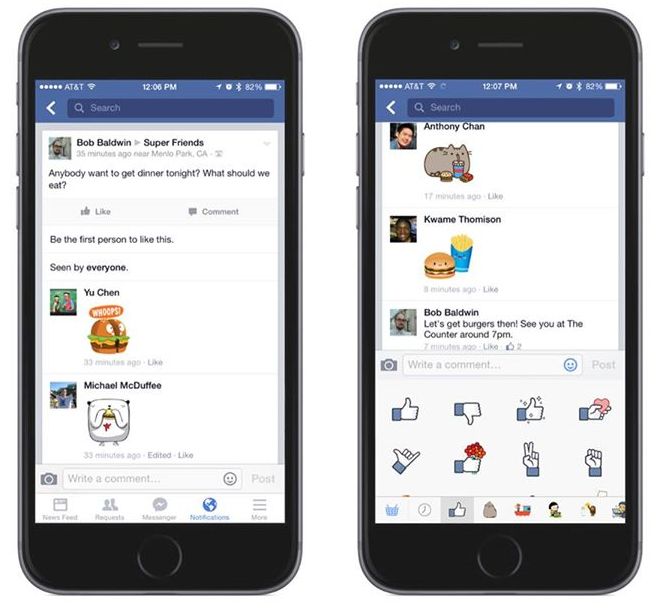 The social networking giant Facebook on Monday unveiled a new feature: stickers in comments. This marks the first time users are allowed to send stickers in comments to (hopefully) add some depth to their posts and better express how they feel about topics of conversation.

Originally started as a hackathon project in New York, stickers were then rolled out to Facebook Messenger and quickly took off from there.

To comment with stickers across Facebook, just tap the smiley face icon in the bottom-right of any comment field in Facebook’s desktop interface or mobile apps. Facebook has enabled stickers in comments in all posts from people, in groups and on events.

Use them sparingly as these huge smiley images take up more space compared to your regular emojis.

“You can now easily show your excitement for a post with good news, cheer up a friend who’s feeling down, and express a variety of more nuanced reactions,” wrote Facebook engineer Bob Baldwin announcing the new feature.

Needless to say, his post earned tons of reactions in comments laden with stickers. An example comment with stickers can be seen on Facebook’s screenshots top of post.

It’s a staggered release so expect it to roll out worldwide “over the next day or so”. In addition to stickers, you can also add color to your conversations on Facebook by attaching photos and emojis to your comments, like before.

Stickers seem to be all the rage these days. Path, the once popular private social network, was big on stickers.

And as pictured above, even the Apple Watch includes an interesting feature where you can send nicely animated smiley faces that can be quickly customized to express how you feel by drawing with your finger on the on-screen character.

And if so, will you be commenting with pictographic stickers in posts from your friends?