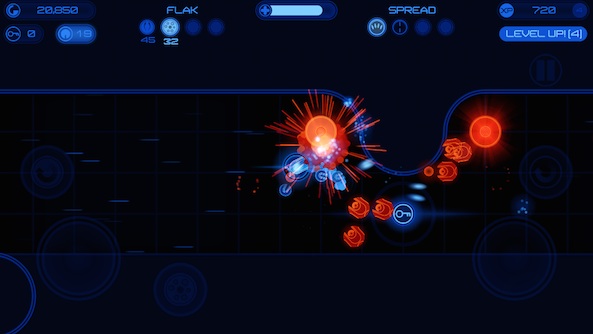 Creating a well made, action-packed twin-stick shooter game for iOS is not an easy task. It seems like most touchscreen dual-stick controllers are so bad that they basically ruin the gaming experience. The developers of Inferno 2 have mastered the dual-stick controller and managed to make a fun game at the same time. We’ve got a full review of Inferno 2 for you today.

The black background and neon graphics of this game take you back to the 1980s while still providing you with a level of design worthy of the 21st century. This isn’t a retro title. It is a traditional arcade game with geometric graphics that are not entirely unlike Tron, but without being a throwback.

Players control a disc-like ship with massive firepower as they navigate through corridors to destroy enemies and find the keys to the exit. Using one virtual controller to move and the other to shoot, players can wander around an entire level, shooting anything that gets in the way while collecting coins and power ups.

Enemy ships take on similar circular shapes, but come with a variety of different features. Some shoot small fireballs. Others attack head-on. There are stationary object that, when destroyed, will emit a shockwave that damages your ship’s hull.

For the most part, players will navigate through a series of connecting corridors, but some walls are not what they seem. Check for hidden access points that will lead to new areas. Some corridors are outfitted with wind tunnels, which will either keep you from moving forward or send you flying into a group of enemy ships. 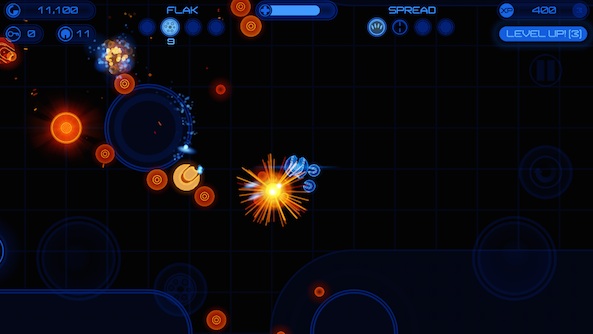 On each level, players must find the key or keys to the exit and make it to the portal alive. You don’t have to destroy every ship in order to complete a level, but it does help with your score.

Your ship is outfitted with a main weapon and a special missile. As you progress, you will unlock new main weapons and missiles, which you will be able to switch between throughout the game.

The movement control is on the left side with the missile launcher below it. The right side is your attack controller with the missile switch above and the special power trigger below. You can rotate the attack while moving at the same time. So, you can move any direction while shooting at an enemy that is stationary, or stay still while blasting everything around you.

When you hold down the missile button, you will unleash the power it holds. However, your special missiles are not bottomless, so don’t waste them on things that are easy to destroy.

When you tap the special power ability, it will trigger whichever power you have equipped. You can send an electro shock to your enemies, slow down time, and more.

Your ship is also followed by a number of drones. These drones will fire at will on nearby enemies, helping you fend off incoming attacks. You can increase the number of drones that follow you with the upgrade points you earn.

There are a large number of upgrade abilities. You can improve the armor of your ship, add more drones, and increase the damage of the main weapon, missiles, and special power. There are four different types of each to unlock and every level has a store where you can buy additional attack items. 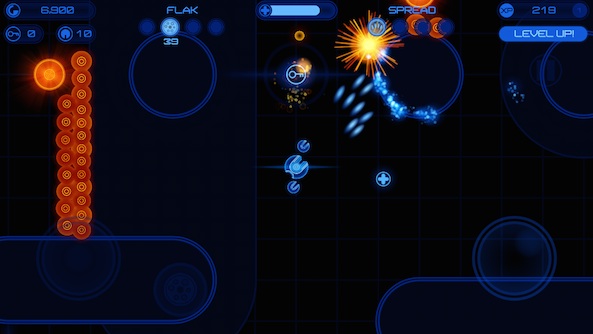 My favorite part of this game is the huge variety of weapons and upgrades you can have stored on the ship at all times. When you unlock a missile or special power, it stays on the ship. You don’t have to choose one or the other. Simply use the switch button on screen to rotate to the missile, weapon, or power you like the most at any given time.

I am very impressed with how well the dual-stick controls work. They are flawless in execution. I never experienced any lag or hiccup in movement or firing.

As impressed as I am with the virtual controller, it is not an ideal setup. The buttons are difficult to see and blend in with the background too much. The missile trigger is on the same side as the movement controller, which makes it difficult to do both at once. This game is Mfi compatible, so if you have a third-party controller, you’ll be very happy with the option.

Inferno 2 costs $2.99. Normally, I’d put a three-dollar arcade game into the high-price range, but I was very pleased with the mechanics and action here. It is top in its class and worth the investment. The replay value is high and since there are more than 80 levels to play through, it will take you a long time just to finish the game once.

Don’t let the price tag turn you off. If you like arcade shooters, especially good quality dual-stick ones, this game is well worth the cost. It will bring you hours of game time fun without feeling repetitive. This game is available on the iPhone, iPad, and iPod touch. Download it in the App Store today.

Radiangames’ JoyJoy is another fantastic arcade shooter and I’ve heard a rumor that it is Starbuck’s Pick of the Week right now, so you can get a free promo code the next time you grab a Grande Latte

What do you think of Inferno 2? Let us know in the comments below.