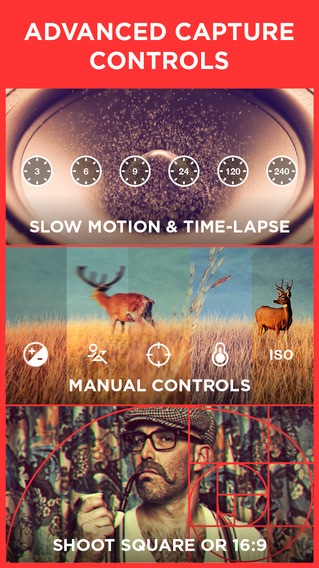 Cinamatic, a nicely done and versatile video capture and editing app that Apple named its Free App of the Week back in July, on Friday received an update bringing the full range of manual camera controls available to third-party iPhone photography apps in iOS 8.

In addition to native support for the iPhone 6 and iPhone 6 Plus display sizes, the new version soups up your device by enabling manual adjustment of the focus, exposure, white balance, shutter speed and ISO, while you’re shooting video.

And if you own an iPhone 5s, 6 or 6 Plus, you’ll enjoy Time-lapse capture at three, six and nine frames per second speeds and silky smooth slow-motion video at 120 and 240 frames per second. Jump past the break for additional enhancements.

Cinamatic 1.5 introduces new image stabilization modes on the iPhone 6 and iPhone 6 Plus devices — Standard and Cinematic — while enabling new capture durations of 6, 15, 30 or 60 seconds.

It’s worth mentioning that the manual controls join Cinamatic’s existing range of video adjustments like intensity, contrast, saturation and brightness, resulting in the experience its creators hailed as “the first video app to fully integrate the new manual camera controls in iOS 8.”

Released in May by the same company that brought you the popular Hipstamatic and Oggl apps, Cinamatic is available free and contains optional In-App Purchases to unlock a flurry of additional video effects and filters.