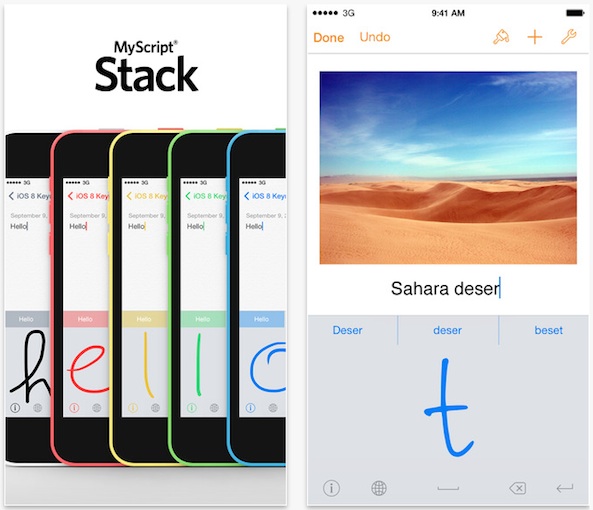 When Apple first announced that it would allow users to set third-party apps as the default keyboard, I got pretty excited. I know it doesn’t seem like that big of a deal, but similar to having a multitude of pens in varying styles and colors, I like having options when typing. It makes it more fun.

MyScript Stack is another third-party app that is now compatible as a default keyboard for iOS 8. Although, I’d be incorrectly describing it as a keyboard since its main feature is that you can handwrite letters instead of typing them.

With this app loaded as your default, you can simply handwrite any word you wish, letter on top of letter, instead of tap, tap, typing away like a grandpa. The future is here. 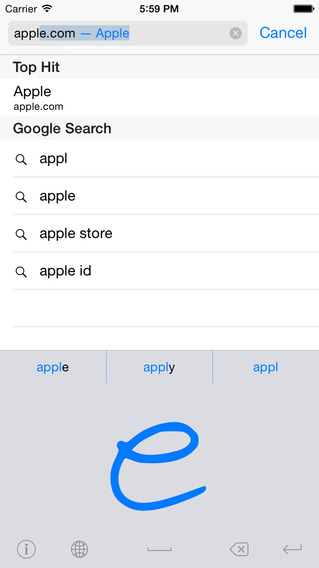 After setting MyScript Stack as a default keyboard, open a document that you wish to write in and a big, blank box will appear. All you have to do is draw a letter to begin. The app will analyze the lines and transmit the letter you drew into the document.

You don’t have to write out a word the way you would on paper, either. The word “stack” in the app refers to the fact that you can stack letters one on top of the other. All you have to do is give it just a fraction of a second, like you would when writing on paper.

The app also includes space and delete gestures. Swipe across the board from left to right to create a space. Swipe from right to left to delete a letter. There are also manual controls for space and delete, plus a Return key.

In addition to the handwriting feature, the app includes predictive typing and auto-correct. As you scribble your words, the app will try to determine what you meant to write. If the word is wrong, the one you actually wrote is right next to it and can be selected instead. 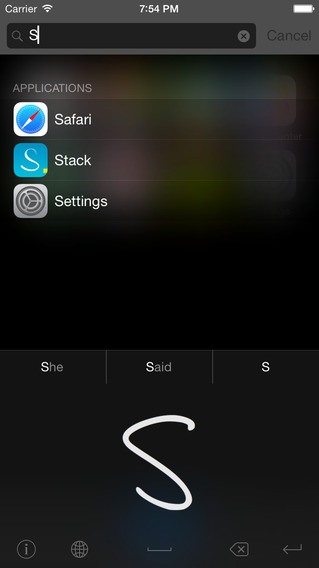 You can switch between the light and dark themed boards or set it to automatically adjust to whatever background it sits on top of. In light mode, you can change the color of “ink” that appears when you write a letter. You can also change the ink’s thickness to fine, medium, or thick. These settings can be changed in the app’s Appearance section.

The main problem I found with this app is that it tends to auto capitalize letters fairly regularly. So much so, that it significantly slowed down my ability to write. I had to go back and rewrite letters. I even gave in and switched to a different keyboard once when I couldn’t manage to write a lower-case “s.”

This is a seriously fun way to write. I love it. Other than the problem with automatic capitalization, I found it to be a worthwhile and unique experience on the iPhone. However, the app does need a bit of polishing. The auto-correct and predictive typing is good, but not great. It certainly isn’t as good as Minuum’s.

If you just want to have fun writing notes to friends, this is worth checking out. However, because of the slow nature of handwriting (I type much faster than I write), it is not a useful productivity app.

MyScript Stack is available on the iPhone, iPad, and iPod touch for free. Download it in the App Store today.