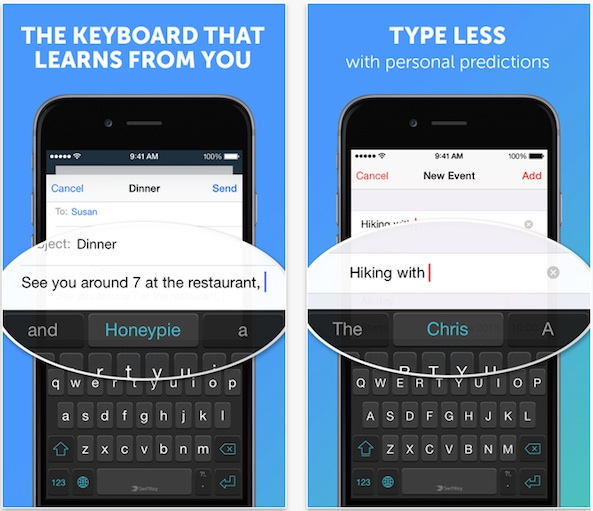 My brother is an Android user and I am an iOS 8 user. So of course he is always showing me things that he can customize on his smartphone that I can’t. One time, he showed me how he could swipe his finger across his keyboard to type words. “Big deal,” I said. “Jealous,” I thought.

Now that SwiftKey Keyboard is available as a default keyboard for iOS 8, I was quick to download it to see just how cool the feature really is. SwiftKey is mainly a predictive keyboard that learns your writing style and gives you suggestions for what you might want to say next. But, it also has that cool “Flow” swiping feature so you can type without tapping.

The app comes with two themes, Nickel Light and Nickel Dark. The Android version comes with multiple color themes. I’m hoping this feature will come to iOS eventually. As I’ve mentioned before, I like colorful keyboards. 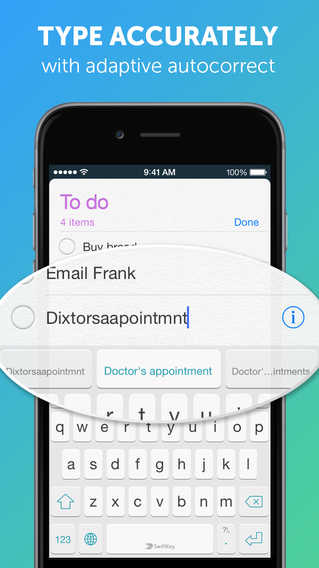 The basic technology behind SwiftKey is its amazing ability to learn how you write in order to predict what you will type next. I haven’t even been using the app for a full 24 hours, but I can tell it is doing its job. It is almost creepy how well it predicts my thoughts. It even suggested phrases, like “ get in the pit” and “are you going to that show,” which I do talk about because of my punk rock roots.

If you sign up for SwiftKey’s cloud feature through Facebook or Google Plus, the app will learn more of your writing style right away based on things you’ve written on the social networking sites. It will also store what it has learned in the cloud so that you can sync it across multiple devices and not have to retrain it. 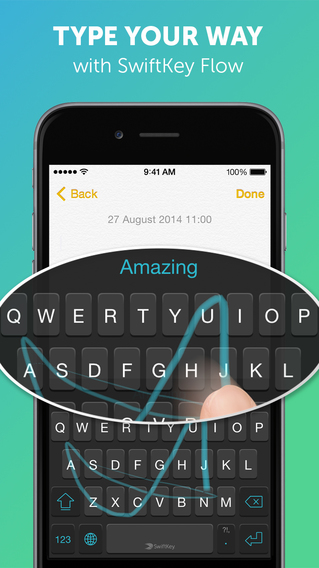 SwiftKey Flow, the swiping feature, isn’t as easy to use as I had hoped. It is simply awkward trying to swipe instead of tap. However, I was amazed at how well it fixed my finger-mashing mistakes. I would swipe across the screen to type a word, like “wondering,” thinking that the result would be a jumbled mess, only to find that the app actually figured out what I was trying to type and corrected it for me. The autocorrect is fantastic.

I don’t think I’ll use the Flow feature very often, not because it doesn’t work well, but because it takes me longer to swipe the letters than it does to just tap them. Maybe with practice I’ll get faster.

The app does not come with its own emojis. If you were hoping to express yourself with a cartoon smiley face, you’ll have to switch from SwiftKey and go to Apple’s emoji keyboard instead.

Some users in the App Store have noted that this app has a few minor glitches. So far, I have not experienced any freezes, blank spots, or slow loading. However, I’ve only been using it for less than a day.

I’ve only tested two third-party default keyboards so far, SwiftKey and Fleksy. However, I can tell from my experience that this app has a better predictive typing feature so it is definitely better for productivity purposes. If you are looking for a faster way to type, this is a great keyboard for you.

The limited color themes makes it seem like a weak version of the Android app, and that makes me sad. I’m going to predict that the app will get an update in the future that will offer multiple keyboard themes as an in-app purchase.

SwiftKey is available on the iPhone, iPad, and iPod touch for free. Download it in the App Store today.