Apple has released iOS 8, the latest version of its mobile operating system, to the public on Wednesday after months of testing by developers.

iOS 8 has been months in the making and was unveiled for the first time in June, at Apple’s annual developers conference. Building on the foundations of iOS 7, iOS 8 can be qualified as a more opened version of the operating system, as developers are now able to tap deeper into the software and offer more powerful features to iOS users.

The update, available now as an over-the-air download (directly from your device) or via iTunes, brings several enhancements to iOS 7. Because this is a worldwide release, users who are trying to update or download iOS 8 might experience connectivity issues. If that is the case, we suggest you arm yourself with patience and try again a little later. 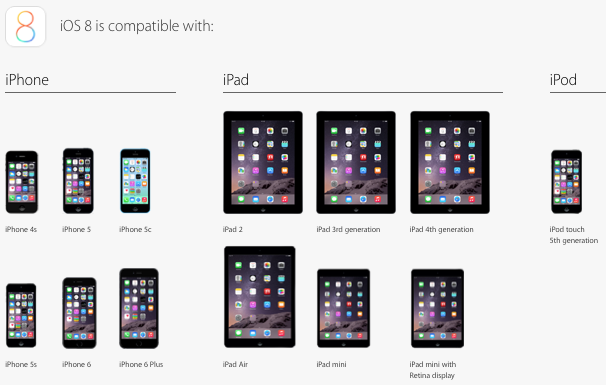 There are two ways you can update your iOS device. You can elect to do so directly from the device, or via iTunes.

Over-the-air update: if you want to update to iOS 8 directly from your iPhone or iPad, go to Settings > General > Software Update. From there download and install the software. Make sure you are on Wi-Fi and your iOS device is plugged in to a power source.

Update via iTunes: As an alternative, you can launch iTunes, plug your iOS device to your computer via the USB cable and click “update.”

Although it might not appear as such at first sight, iOS 8 is a massive update for app developers and users alike. iOS 8 brings along an array of new features and APIs that developer can use to improve their applications and offer better, more powerful apps all around. Below are some of the new features you should look for in iOS 8.

From new features to more tools for developers, this is just the tip of the iceberg. Here is a list of the best new features of iOS 8.