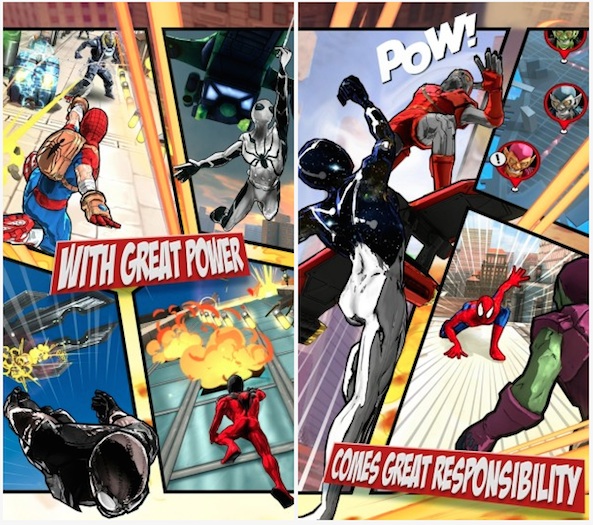 Gameloft and Marvel have teamed up again to bring us another web-slinging adventure from the quick-witted Spider-Man. As if we haven’t had enough fun with The Amazing Spider-Man 2 and Spider-Man: Total Mayhem.

Spider-Man Unlimited is the first free-to-play Spidey game on iOS. The hand-drawn episodic runner is set in the Marvel Universe where you will hang out with the likes of Nick Fury and the Agents of S.H.I.E.L.D, as well as fight the Green Goblin, Vulture, and more. It is also this week’s Editor’s Choice in the App Store.

This game is more than just an endless runner. In fact, it is not endless at all. It has an end. That is, players follow a storyline with missions and goals. Instead of running for distance, you are running for a reason. 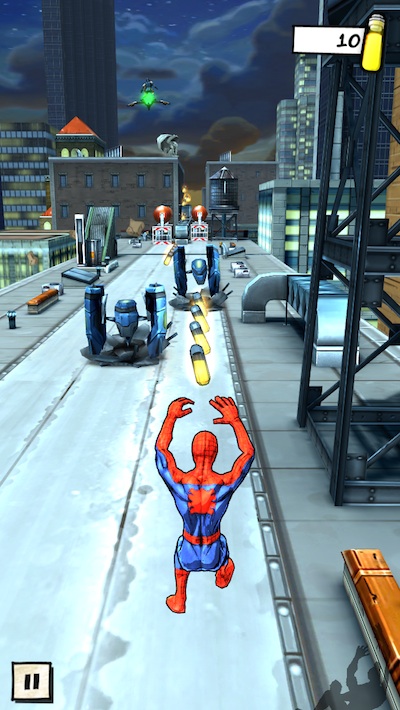 Players control Spider-Man by swiping left or right to move, swiping up to jump, and swiping down to duck, collecting Vials along the way. There is a lot more to this game than basic runner controls though.

Spider-Man will face off with enemies, which he can punch or kick on his run. Swipe up or down to attack a basic enemy. Swipe up to hit flying enemies and swipe down to knock out shielded enemies.

You’ll also swing from one building to another by touching and holding the screen for one second repeatedly. In some parts of the game, players skydive and wall-climb by tilting their device left and right when Spidey goes vertical.

In story mode, players are tasked with completing specific missions, like collecting pieces of technology or beating up a certain number of enemies. When you complete a mission, you’ll earn Vials and Iso-8, which are both in-game currency.

In endless mode, players go the distance to practice their runner skills and earn experience points in order to level up. 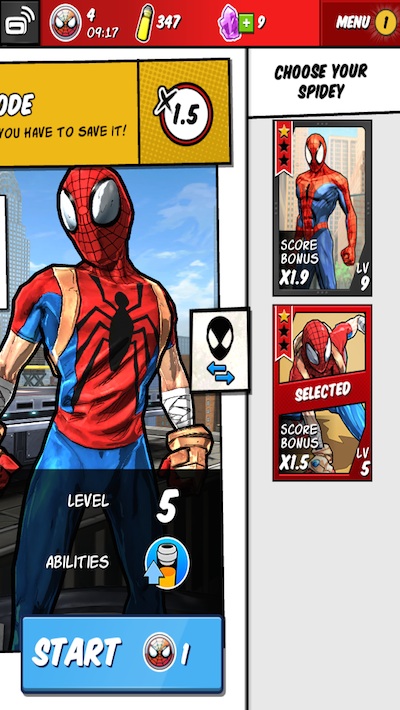 You can also unlock new Spider-Men to play. The story in this game is that S.H.I.E.L.D. has discovered how to bring Spider-Men from other dimensions, like Cosmic Spidey, Spider-Man Noir, and Scarlet Spider. Collect as many Super heroes as you can. You can bring a new super hero into this dimension by spending Vials or Iso-8. When you do, a random Spidey will be added to your collection. Collect as many Spider-Men as you can. You can fuse like-costumes together to level up their ranks. Each suit performs different abilities. For example, Mangaverse Spider-Man produces bonus Vials.

The pay wall is based on energy points. Players start with five energy points and it costs one to play a level. Once you’ve run out, you’ll have to wait 10 minutes for more. The game replenishes your energy for free until you’ve reached level 10. After that, you’ll either need a lot of patience or a few extra dollars to spend.

Spider-Man Unlimited is available on the iPhone, iPad, and iPod touch for free. Download it in the App Store today.

What do you think of Spider-Man Unlimited? Let us know in the comments below.