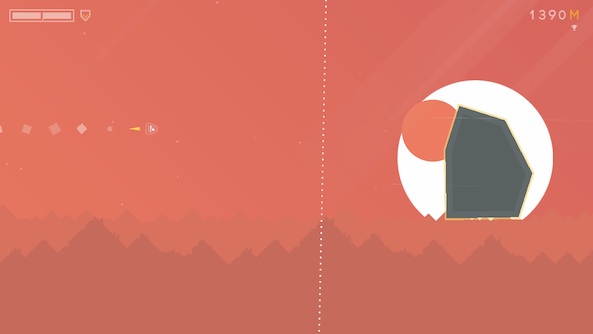 Just when you thought the endless runner genre had done all it could possibly do, Laser Dog comes along and makes it into a sci-fi side-scrolling arcade game. ALONE… is a fast-paced arcade style game that focuses on your ability to react fast to oncoming dangers while maintaining composure in the face of insurmountable odds. We’ve got a game review of ALONE… for you today.

This has a simple side-scrolling shadowed foreground style. Players are maneuvering through a rocky cave with winding tunnels. Bits of rock fall from the sky and players try to avoid crashing into them by flying upward or downward.

You are controlling a tiny ship through this speedy atmosphere. A trail of smoke drifts behind you. Players control the ship by dragging their finger up or down on the screen. The controls are extremely tight and the slightest move will send you careening up or down.

The controls are reversed. To move upward, drag your finger down. To move downward, move up. You can change the controls in the settings section, which I did almost immediately because the game moves so fast, I just couldn’t get used to the reverse control mechanics. 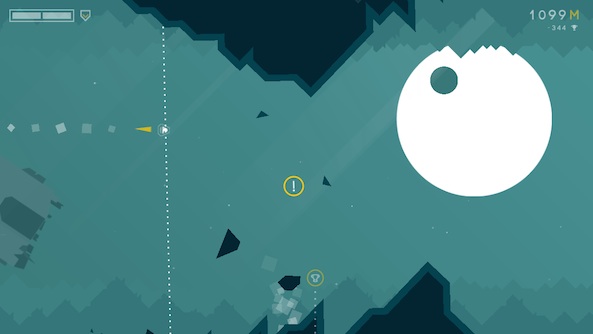 The gameplay is fairly simple. All you do is maneuver your ship through a fast-paced obstacle course filled with falling rocks. The controls are super tight and it is very easy to over compensate for moving through the tunnels. You barely have to move your finger at all to go up or down.

If you do hit a falling rock, you will lose one point of health. Your ship has two points in total. If you manage to avoid getting hit again within a two-second time frame, you will regenerate health. So, you can hit quite a few rocks, as long as it doesn’t happen too often.

As the game progresses, new elements are introduced. For example, rockets appear in the second world, which you will get a warning in your heads-up display of their location so you can move out of range before they hit.

If you run into a cave wall, there is no coming back. You will die immediately and have to start the run over again.

The game moves so fast that I never made it to the third world. My reflexes are just not fast enough to get that far. 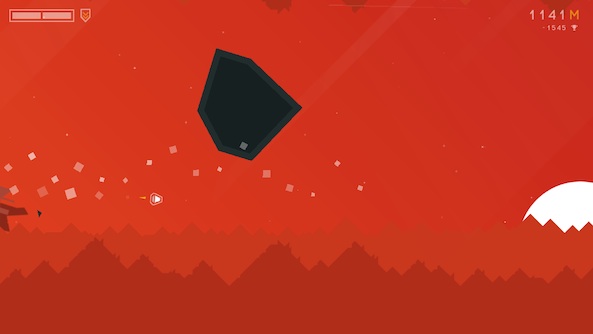 This game moves very fast. If you have fast reflexes and like games that push you to the limit, ALONE has it in spades. The controls work perfectly, which is essential in a game like this were every nanosecond counts.

My only issue with the game is that unlocking a new world is so difficult. I played the game for so long that my eyes began to hurt and I’m still a few thousand meters from unlocking the third world. I’d like to see the distance goal to drop some.

ALONE… costs $1.99. The price is a little steep for a basic endless runner. It works great and presents hours of replay fun. However, it seems like it would be better priced at $0.99.

If you fancy yourself good at fast moving action, this is the game for you. It scrolls along at such speeds that it is almost dizzying to watch. It has a high replay value because you just want to give it one more try to beat your previous distance. This game is available on the iPhone, iPad, and iPod touch. Download it in the App Store today.

What do you think of ALONE…? Let us know in the comments below.