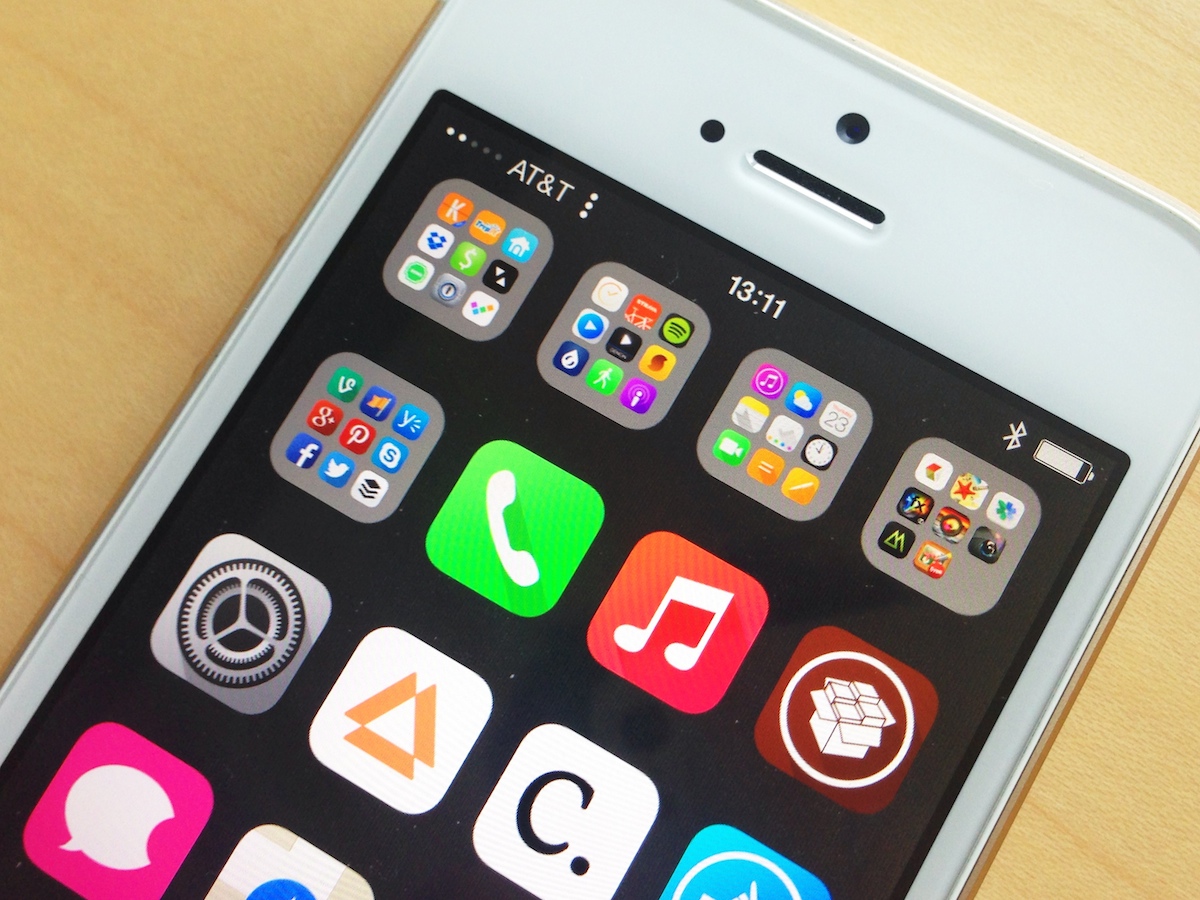 The Status Bar provides a great deal of information such as the time, battery percentage, network signal and more that is viewable from anywhere within iOS. The problem is, you don’t have complete control over what shows in there, and you have even less control about how it appears. As a result, many jailbreak tweaks have emerged on Cydia that help you customize the Status Bar. To help you discover the best ones, we’ve compiled a list of the best jailbreak tweaks for the Status Bar on iOS 7.

One of the possible ways of finding out which music is currently playing on your device is to launch Control Center. #PlayMe2 provides a quicker way by displaying the song title and the artist of the currently playing song right in the Status Bar.

If you’re much into customization, make sure to check out Alkaline. The tweak allows you to theme the battery icon in the Status Bar without using Winterboard. It comes pre-installed with three default themes, but you can also download additional themes for Alkaline in Cydia. One of my favorites is ‘Live Battery Indicator iOS 7’ theme which is shown in the screenshot above. Alkaline can be downloaded from Cydia for free.

Arco is one of my favorite tweaks developed by the folks behind A3tweaks. It adds a play or pause icon to the Status Bar enclosed by a progress indicator allowing you to track the progress of the currently playing song. Along with the stock Music app, Arco supports many other third-party apps. Arco is available on Cydia’s BigBoss repository for $0.99. Yet, more interesting is that the proceeds from the earnings will go to the ‘Because of Ezra’ charity so you’ll benefit from the tweak as well as have your money go to a great cause. 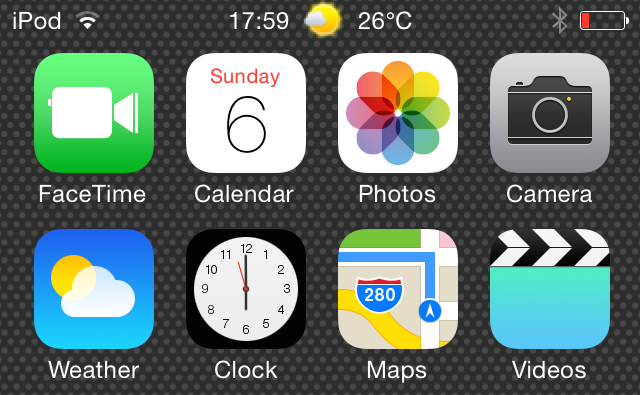 StatusbarWeather7 is a jailbreak tweak that displays the current weather information such as the temperature on the Status Bar. The tweak can automatically fetch your current location from the Weather app or you can manually enter your location ID. Needless to say, it’s a useful tweak to take a quick glance at the current weather information without venturing into the stock Weather app. StatusbarWeather7 is available for free on Cydia. 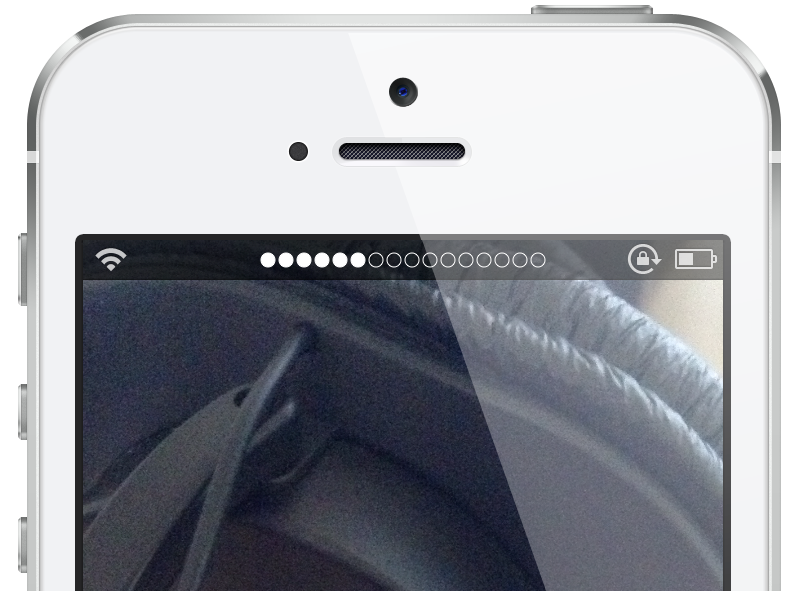 Instead of showing a pop-up volume HUD on your screen, StatusHUD 2 places it on the Status Bar and is displayed whenever you raise or lower the volume. When you’re inside an app that doesn’t show the Status Bar, adjusting the volume will display the Status Bar temporarily before hiding it again. StatusHUD 2 can be downloaded for free via Cydia’s BigBoss repository. 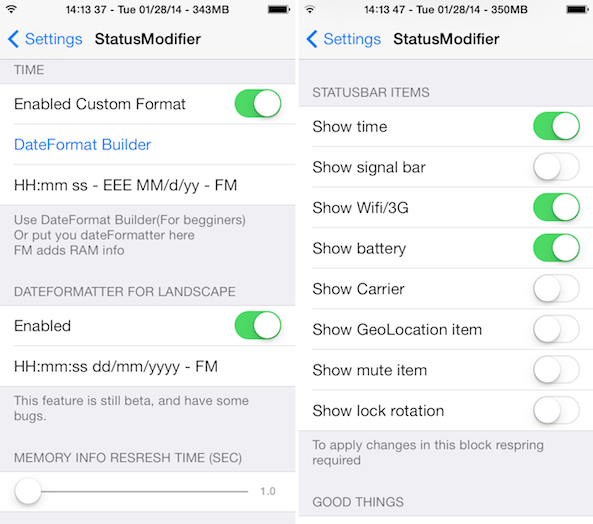 StatusModifier gives you complete control over your Status Bar and allows you to hide various items such as the carrier text, battery icon, Wi-Fi/3G etc. from the Status Bar. Additionally, the tweak lets you add a custom date and RAM information along with the time. You can add the seconds, day and month of the year as well as free RAM available from an easy to use builder. StatusModifier is available for free on ModMyi repo.

You’ve probably seen the typing indicator in iMessage which indicates that the other person is replying back to you. If you’re in a different app, you won’t know it. TypeStatus adds a typing indicator to the Status Bar as well that can be viewed from anywhere within iOS and displays who’s replying back to your message. TypeStatus is available for free on Cydia and supports iOS 5, 6 and 7 devices.

If you’re looking for a way to hide the Status Bar and see it only when needed, you should check out Wink. The tweak hides the Status Bar and allows you to view it only when you tap on the top of the screen where the Status Bar is originally located. It will appear for a few seconds before hiding again. Wink is still in the beta phase, but it works smoothly on my iPhone 5s running 7.0.4 firmware. To get your hands on the tweak, you’ll first have to add the following repo: http://repo.fortysixandtwo.com/ . 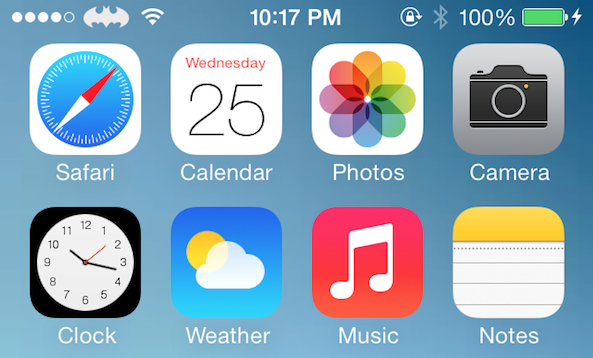 Zeppelin allows you to replace the boring carrier text with a custom logo of your own. There are tons of Zeppelin logos on Cydia which you can download and use, but the tweak also comes with default logos such as Android, Batman, Beats by dre, Infiniti and more. Better yet, Zeppelin can be downloaded for free via Cydia’s BigBoss repository.

These are the best jailbreak tweaks that allow you to customize the Status Bar on iOS 7 and add new items to it. If we have missed a tweak that deserves to make it to the list, let us know in the comments section below.

Some of the best tweaks you should check out

Note: the theme in the top image is Solstice, one of the best themes for iOS 7.