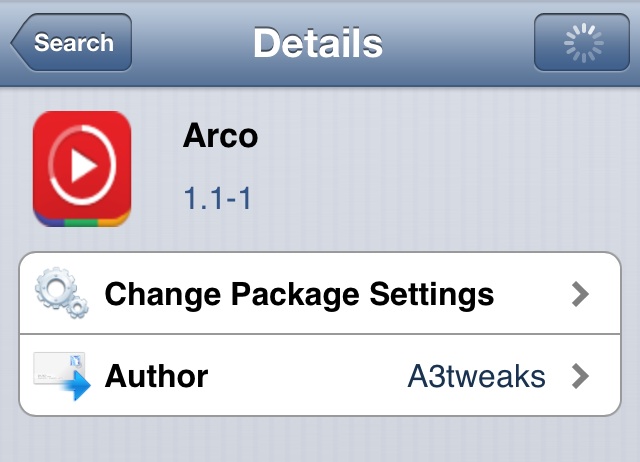 Arco is a recently release jailbreak collaboration between Jack Willis and Sentry. The release, which falls under the A3tweaks umbrella, places a visual music timeline indicator in your device’s status bar.

The design of Arco is very much akin to the download animation that happens in the App Store in iOS 7. In iOS 7 there’s a round circle indicator that wraps around a button, which is indicative of the download progress. In the case of Arco, the “progress” is in relation to a currently playing song.

Although it’s a solid tweak, the best thing about Arco isn’t about design or functionality. The great thing about Arco is where the money goes when you purchase a copy. A3tweaks has generously decided to forward all proceeds to Kyle Matthews’ Because of Ezra charity, which helps to fund research for neuroblastoma, a terrible form of pediatric cancer.

Arco in itself is an extremely simple tweak with no options or settings to configure. It fits in real well with the overall scheme of iOS, and if you didn’t know any better, you’d think the feature was a part of stock iOS.

That’s a pretty big compliment, because as you know, we see a lot of tweaks that feel disjointed and alienated from iOS. Arco feels right at home on the platform, and is actually beneficial, as it helps you see where you are in a song at a glance.

Despite the tweak’s awesomeness, the real story here is the Because of Ezra charity. Kyle Matthews has played a pretty significant role in the jailbreak scene in general, as founder of ModMyi. Sadly, he and his wife lost their son to the aforementioned cancer that this charity benefits.

Needless to say, if you feel you’d benefit even a little bit from Arco, it’s a worthwhile purchase, given where the money is going. Other developers in the past, most notably, Filippo Bigarella, have done similar things. Now it’s A3tweaks’ turn to step up to the plate, and as you would expect, they’re giving you a great tweak to go along with a chance to show your generosity.

Arco is available for $0.99 right now on Cydia’s BigBoss repo. Have you tried it yet? If so, share your thoughts and comments down below.