The Status Bar provides a great deal of information such as the time, carrier, and much more which can be viewed from anywhere within iOS. Wink is a jailbreak tweak that’s been available for a long time on Cydia but didn’t receive the attention needed, solely because it is available on the developer’s own repo rather than on one of the major repos.

Wink brings an on-demand Status Bar to your iOS device allowing you to view it only when needed. This means that the Status Bar will remain hidden giving you more screen estate.

So how does it work?

Wink hides the Status Bar and allows you to view it again by tapping on the top of the screen where the Status Bar is normally located. It will appear for a few seconds before fading again. The developer could also add an option to hide the Status Bar with a tap rather than a timer. 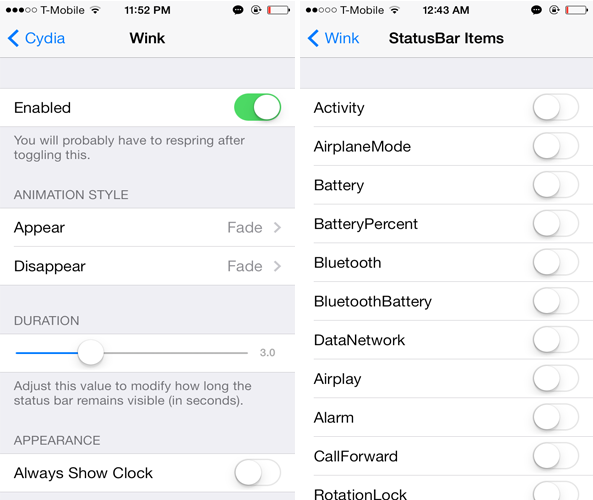 Wink comes with a bunch of settings which you can configure from the tweak’s preferences pane. You’ll find a kill-switch toggle to enable or disable it, various fade-in and fade-out animation styles as well as a slider to adjust the duration that the Status Bar will remain visible.

Yet, the best thing is that you can disable the tweak in certain apps as well as on the Springboard where you want the Status Bar to remain visible. You’ll also find an option to choose which items you’d like to remain permanently visible on the top of the screen rather than hiding them with the Status Bar.

The tweak works flawlessly as advertised. The only issue is that the ‘permanent visibility’ option for the Status Bar items don’t always work, but this might be due to the fact that the tweak is still in the beta phase.

If you want to give Wink a try, you’ll first have to add http://repo.fortysixandtwo.com/ repository to Cydia. What do you think of Wink? Is it something you’ve always wanted? Let us know in the comments section below.