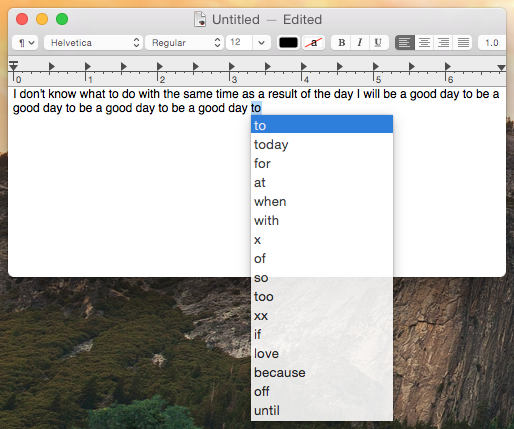 It’s no secret that Apple is merging many iOS and OS X features into one seamless experience across devices, and one of these instances – QuickType, the predictive typing feature found in iOS 8 – has recently surfaced in OS X Yosemite.

By pressing the ESC key, Yosemite users can invoke a drop-down menu containing several suggested words that OS X thinks should be typed next. Pressing SPACE BAR will insert the highlighted word along with a space, so users can continue typing or press ESC again for the next suggestion. Note that this is different from a similar feature that has been present in OS X for a few years.

While the ESC action has been in versions of Apple’s desktop operating system for a while now, its functionality has been limited only to a form of autocorrect/autocomplete, similar to that found in iOS. Previously, pressing ESC while in the midst of typing a word would only present the user with autofill suggestions matching the first few letters of that word. For instance, typing “iDow” and pressing ESC might suggest “iDownloadBlog,” since it learns from the user’s typing habits.

With Yosemite, this feature extends to suggest untyped words and can even be used to type full sentences, although repeatedly choosing the first suggested word does tend to loop phrases eventually. Despite being somewhat rough around the edges and lacking support for most applications, I can see this becoming a useful feature in future updates.

For now, this feature only works in certain applications, such as TextEdit. It also has very limited functionality in Messages, where it only suggests the names of recipients in a group chat. It currently doesn’t work at all in Safari and many other apps, but will likely gain compatibility with other programs over time.

Once it comes to Messages and Mail, perhaps the noted iOS 8 feature of automatically suggesting one-tap replies based off the contents of incoming messages will work in Yosemite as well, which would help validate “QuickType for OS X” as a useful feature.