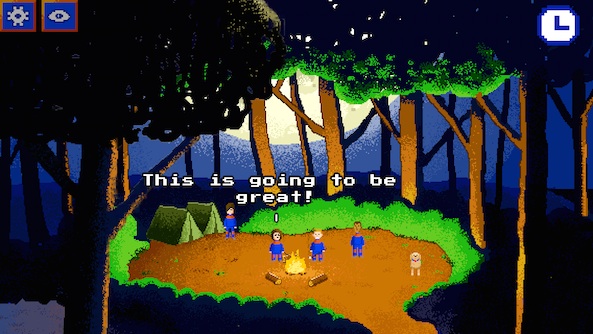 Director Steven Spielberg made such magical sci-fi movies as “Close Encounters of the Third Kind,” “E.T. The Extraterrestrial,” and “War of the Worlds.” Thanks to films like these, I am always looking to the stars, wondering whether there really is something out there.

Bik – A Space Adventure has the perfect plot for a Spielberg movie. Boy goes camping. Boy gets abducted by aliens. Boy saves the world. Help Bik survive with the aid of his new alien buddy Ammut.

This game is full retro pixel beauty. Fans of old school graphics like these will fully appreciate the flashback PC adventure vibe you get from the game’s 2-D 3-D imagery. The adventure takes place in multiple locations, including Ammut’s ship, a forest on Earth, and the Umarian vessel. Players engage with different characters, making them complete tasks and solve puzzles. For example, sometimes, you’ll be controlling Ammut on his broken down ship. Other times, you control Bik as he tries to escape from the Umarians.

To control the characters, tap on the screen where you wish them to go. Interact with objects by tapping them to call up the menu screen, and then performing an action. For example, you can speak with Bik’s friends or grab something off of the ground. You can combine two objects from your inventory and then use the new item with an object on the screen. For example, you can put a marshmallow on a stick and then place it in the campfire.

The storyline is the most important part of the game. Players engage in new tasks that forward the plotline along, making every moment seem like it will have a direct impact on the end.

It has a definite old school point-and-click adventure game feel to it, complete with chip tune soundtrack and witty, but corny dialogue. 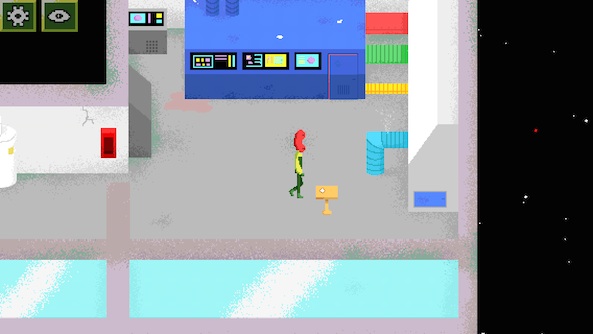 Players start with Ammut in his dilapidated ship as he tries to figure out how to put out a fire. After solving the mystery by collecting items, using technology, and saving Ammut’s shipmate, you will move to Earth, where Bik is camping with some friends.

In each scenario, players must figure out the next course of action. You can wander around, exploring every possible object, or tap the hint button to see what you should be focusing on. Tapping the eyeball in the upper left corner of the screen will create blinking highlights around every item on the screen that you can interact with. Tap the item to find out more. Sometimes, you have more than one option when interacting with objects. For example, you could give Bik’s friend a toasted marshmallow, or talk to him about video games. The choice is yours.

In your inventory case, you can put an item in your hand for use, view an item to see what it does, or combine two items. Try combining items to see what happens. If they won’t go together, you’ll see the message, “That will not work.” If they can be combined, the new item will then be stored in your inventory.

There are also quite a few mini games within the adventure. In addition to finding parts for your ship, you’ll need to figure out how to shut off the plasma field, for example. Mini games consist of simple logic puzzles.

I’ve only gotten through a small portion of the adventure, but I can say for sure that I am having a blast and look forward to finding out how Bik figures out how to get out of the jam he is in. 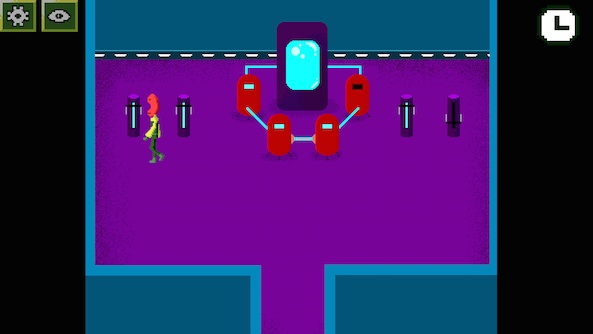 The story is very well written. It feels like I’m participating in some kind of 1980s kids movie, like “Explorers,” or “Flight of the Navigator.” The dialogue is just cheesy enough to be easy to digest without making you roll your eyes.

The only problem I noticed was that there were a few times when it seemed like the game ran slowly.

Bik – A Space Adventure costs $0.99. This game is well worth at least twice that much. The story is engaging. The tasks and puzzles are interesting. The replay value is low since you are playing through a story that doesn’t change. However, you’ll go back to the game again and again until you get all of the way through it.

If you like old-school point-and-click adventure games, you should already be playing this one. It is loads of fun, has a great story, and will really bring back memories of making your mouse greasy from playing for too many hours every night. This game is available on the iPhone, iPad, and iPod touch. Download it in the App Store today.

The general gameplay is similar to Little Big Adventure with the engaging storyline and plenty of tasks.

Do you own Bik? If so, tell us what you think of it in the comments below.