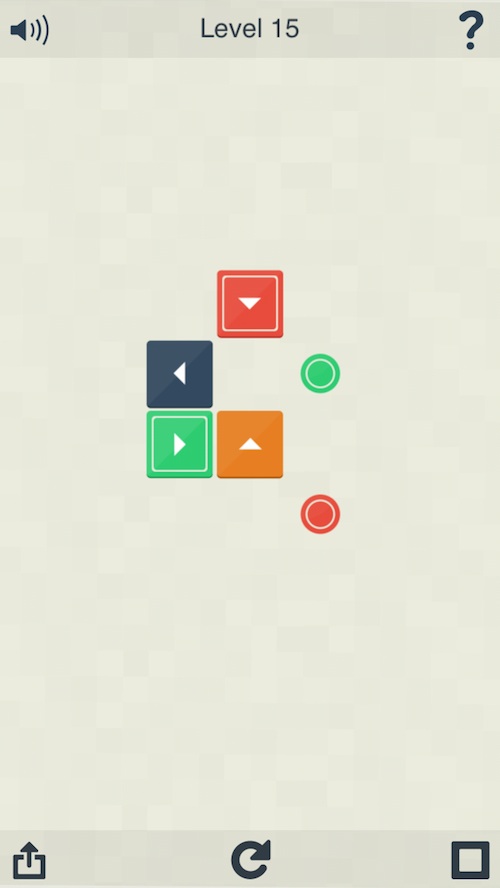 I wonder if there is any study, which shows that playing logic puzzle games improves your brain function. If that were the case, then I would be a genius by now.

Squares: Puzzle Game is one of those titles that make you feel a little bit smarter than you were before you started playing. All you have to do is move some squares around, but the complexity is in its simplicity. We’ve got a game review of Squares: Puzzle Game for you today…

The game board is an off-white, blank screen. On it, there are a number of squares with arrows inside of them. For each square, there is also a dot with a matching color. The goal is to get the square on top of the dot. The difficulty is in doing so.

Now, you can see where the complexity comes in. 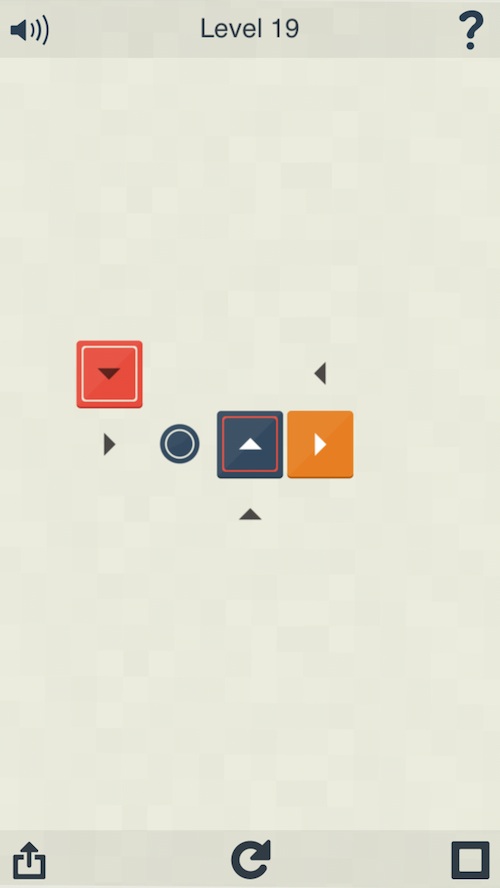 The game starts in a mysterious way. One square and one dot appear on the screen with no explanation. At first, I tapped and swiped at the screen and nothing happened, so I closed the app and reopened it only to see the same screen. I tapped the square and it moved. Ah. I see. Tap the square to make it move in a specific direction.

The first few levels are very simple so you can learn the basic movement. Tap a square to make it move. Push other squares to move them in the same direction, even if their arrows are facing a different direction. Move over a stationary arrow in order to change the direction the square can move. There are no instructions, but experimenting with the objects on the screen will make things clear fairly fast.

The goal is to get a square on top of its matching color dot. When all squares are on top of all dots, you’ve solved the puzzle.

It’s a lot harder than it sounds.

For example, on one level, a green square faces a red dot, a blue square faces a green dot, an orange square faces a blue dot, and a red square faces an orange dot. The arrows are all facing each other so that moving in the designated direction will do nothing but push the square on the opposite side, further from its goal. What do you do?

The puzzles start out fairly easy, but curve pretty fast at about a dozen levels in. You can reset the puzzle at any time, starting over from the beginning. You can also use a hint to solve the puzzle, which walks you through each step until it is complete.

The game comes with one free hint. Additional hints can be added through an in-app purchase. However, if you don’t want to spend any money on this game, don’t use hints. 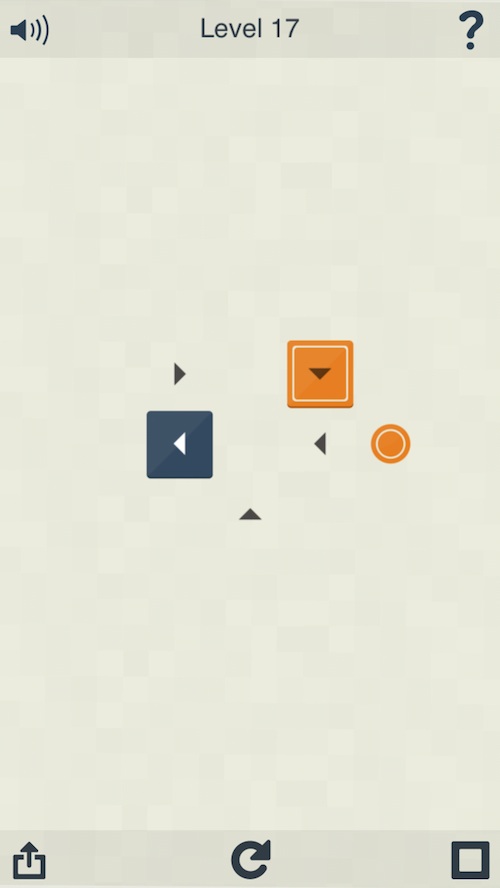 I love how much this game makes me think. I know there is a solution to every puzzle, no matter how impossible it seems. The challenge in front of me pushes me to keep trying until I finally solve it.

I’d like to see an “Undo” button for this game. When you make a mistake, you must start from the beginning of the level. Sometimes, I might tap a square, realize I shouldn’t have, and want to simply undo that move. I wouldn’t even mind if that was an IAP, although I’d be happier if it wasn’t.

Squares: Puzzle Game is $0.99. There are no advertisements. However, you may find yourself wanting to spend money on those hints in order to make the game a little easier. The replay value isn’t particularly high, since a puzzle can only be solved one way.

I definitely recommend this game to fans of the genre. The puzzles are challenging and really put you to task. I could practically feel my brain muscles growing as I played each level. If you are looking for something to give your intellect a workout, you have found the right trainer. This app is available on the iPhone, iPad, and iPod touch. Download it in the App Store today.

Rules! is a memory game that I’ve been having a lot of fun with lately. Primitives Puzzle in Time is a time-based game where you must figure out the shortest path to the exit.