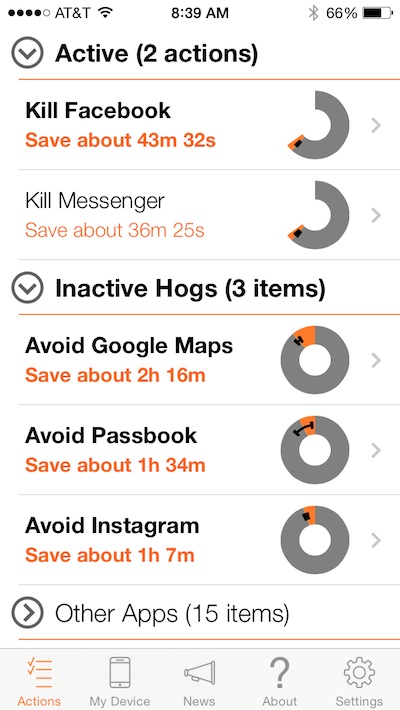 Some days, my iPhone 5 works all day with very little battery drain. Other days, it seems like I’ve run out of juice after minimal usage. I’ve always wondered which activities are the biggest culprits in my battery drainage.

Normal: Battery Analytics is a diagnostics app that uses general information about your device and compares it with that of thousands of other iPhone users to help you determine which apps should be killed and which should be deleted altogether in order to spare your battery life.

The app uses a simple black, white, and orange theme. It is clean and easy to read. The Actions tab shows you active and inactive apps on your device that are known to cause battery drainage. It also includes basic information about other apps that it recognizes on your device. For example, HipChat is not a known hog with Normal. However, you’ll see that, based on the gathered information of all devices running Normal, it is active 23 percent of the time, on average.

Under the My Device tab, you’ll see general information about the model of phone you use, how many apps you have running and how that compares with others, and a sample analysis of your specific device.

Unread items are in bold. So, if you receive additional data regarding an app, you’ll know what information is new and what has already been read.

In the Settings section, you can set the app to only send and receive data when your iPhone is plugged in or while using Wi-Fi. 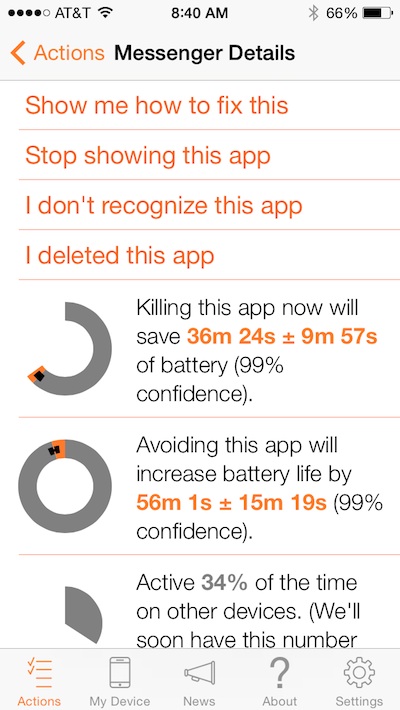 The app gathers generic usage data on your device, like what apps are running, your device model, and the battery level. The information is sent to the Normal cloud program where it, along with data from all other users, is analyzed using proprietary statistical algorithms. The analysis is then relayed to you in simple, clear ways using graphs and percentage values so that you can decide the best way to keep your battery from draining. If you follow the suggestions, you could increase your battery life by hours.

All you have to do is install the app to see what to do next. The app will immediately identify active and non-active hogs on your device. Tap on an item to read more about it and find out the best way to alleviate the battery drain.

For example, when running Facebook on my iPhone 5, I risk draining my battery 40 minutes (plus or minus four minutes) faster than if I “killed” the app. For those who don’t know the terminology, killing an app means closing it in multitasking so that it no longer runs in the background. If you don’t know how to kill an app, tap the tab that reads, “Show me how to fix this” from the available options and you’ll be shown a step-by-step guide.

The app includes additional general data for apps. For example, Normal analyzed Facebook on my model of phone. With 99 percent confidence, the app predicts that my battery life will be increased by more than one hour if I delete it. I also know that the app runs 63 percent of the time on other devices. The app is also supposed to identify usage on my personal data. However, it still has not updated with that information.

You can customize the data view in order to have a more personalized experience. For example, if you want to keep Facebook’s Messenger app running, even though it is a known hog, you can select to “Stop showing this app,” and it will be moved to a “Hidden” list where you can access it if you want, but it won’t be visible on your main Actions page.

If you don’t recognize the name of an app, you can report it to Kuro Labs and the program will attempt to identify it for you. Some apps appear in the Normal database under a different name than what it is called on your iPhone. For example, one app on my list is called “One” in Normal. However, I don’t have an app with that title. It could be referring to Golden One, or NPR One, or maybe even something completely different. I can notify the development team that I don’t recognize the app and they will find out an alternative name I might recognize.

If you’ve deleted an app that appears on the list, you can mark it as deleted manually and it will not appear again unless Normal sees it running on your device. I have an app on the list that I had deleted recently. I marked it as deleted, but it continued to show up on the list for some reason.

Inactive apps can also be a drain on your device (probably because they will drain you battery if you open them). My list included a handful of apps that would save me hours of battery life if I deleted them from my iPhone, including Passbook, Contacts, Google Maps, and Boxer. Of course, I’m not going to delete Google Maps, and I can’t delete the stock Contacts app, so I hid those from the list.

Each app includes a small graph that shows your current battery charge in gray, the fraction of your battery being drained by use, and a black line that shows the degree of uncertainty. A shorter line means the information is being stated with more certainty than a longer line.

The app also includes some general information on how to save battery life, like how to disable Background App Refresh or enable Airplane Mode. These activities, coupled with killing or deleting apps that are battery hogs, will help keep your juice as full as possible. 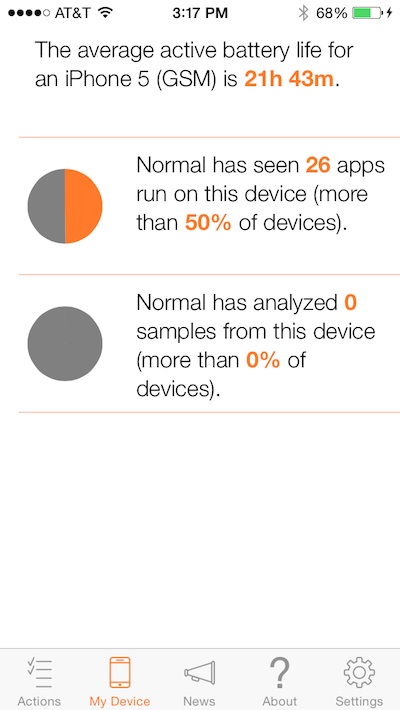 I like knowing which apps tend to be more of a battery hog than others. It helps remind me to kill apps when I’m not actively using them.

This app explains the best options for increasing your iPhone’s battery life in a clear and concise way with a visual graph that makes it easy to understand the information presented.

I noticed that the app never got around to analyzing my device. I left it running for four days straight and never received any information about my iPhone specifically, which is supposed to be included after a time.

I also noticed that some of the apps on the Inactive list were actually running on my iPhone (like Messenger and Boxer). Only when I would reopen the app would it register as active again on the list.

Normal: Battery Analytics costs $0.99. For the useful information you get, it is well worth the price. Every device is different. If you don’t have any known battery hogs on your iPhone, like Facebook or Google Maps, you won’t be shown a list of apps to kill. However, if you do use known hogs on a regular basis, like Messenger, then it is a great reminder of the importance of killing the app before it drains too much of your battery. Now it must be said that iOS 8 will come with its own feature to show you what apps are draining your battery the most. Still, this app seems to offer more details.

I think this is incredibly useful for anyone who wants to keep track of battery-hogging apps and remember to kill them or delete them in order to increase battery life. It doesn’t magically fix your drainage issues. It is up to you to remember to shut them down. However, this app helps remind you. Download it in the App Store today.

What do you think of Normal? Are you curious about what apps are battery hogs on your iPhone?