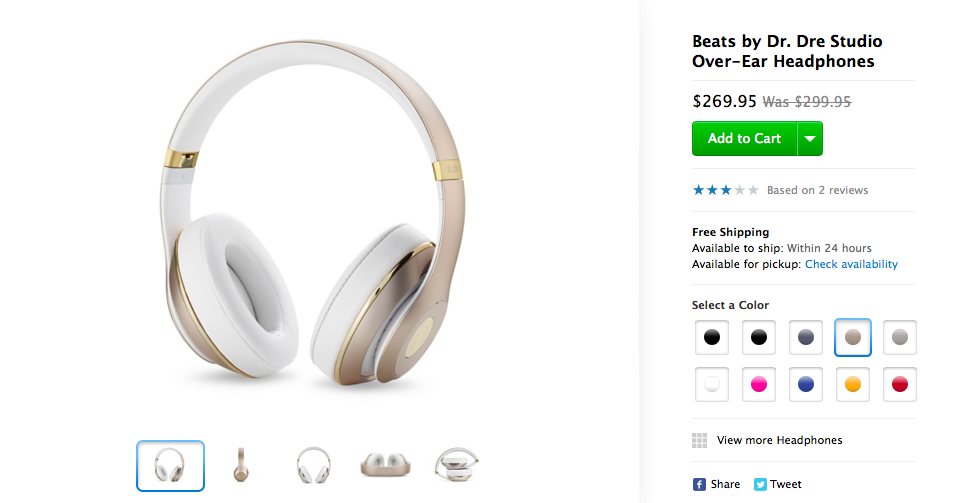 Apple’s short-term strategy regarding the $3 billion buy of Beats Electronics and Beats Music is starting to take shape with each passing day.

Not only is it actively advertising and selling Beats products through its brick-and-mortar locations and online retail stores, but now the California firm has shaved a cool 10 percent off all Beats by Dr. Dre headphones and assorted accessories.

This is virtually an unheard-of move — the company rarely discounts its own products by more than a meager few percents.

As an example, the Beats by Dr. Dre Studio Over-Ear headphones that normally sell for $299.95 now retail for a more reasonable $269.95 over at the US Apple Store.

The popular in-ear headphones have seen price drops, too. Case in point: the $199.95 Beats by Dr. Dre Powerbeats2 Wireless Headphones can now be had for $179.95.

For those wondering, other Beats products like speakers and audio accessories are now 10 percent cheaper as well. Mark Gurman has learned through a source that the price cuts are temporary as the promotion will reportedly last through this coming Saturday, August 23.

Apple two weeks ago gave Beats by Dr. Dre products their own section on its webstore.

Similarly, the Beats Music earned its spot in the ‘Apps Made by Apple’ section on the App Store. Moreover, the firm was recently seen pushing the subscription-based music streaming service to new iOS device owners via App Store prompts while attempting to bring new customers by making annual subscriptions more affordable.