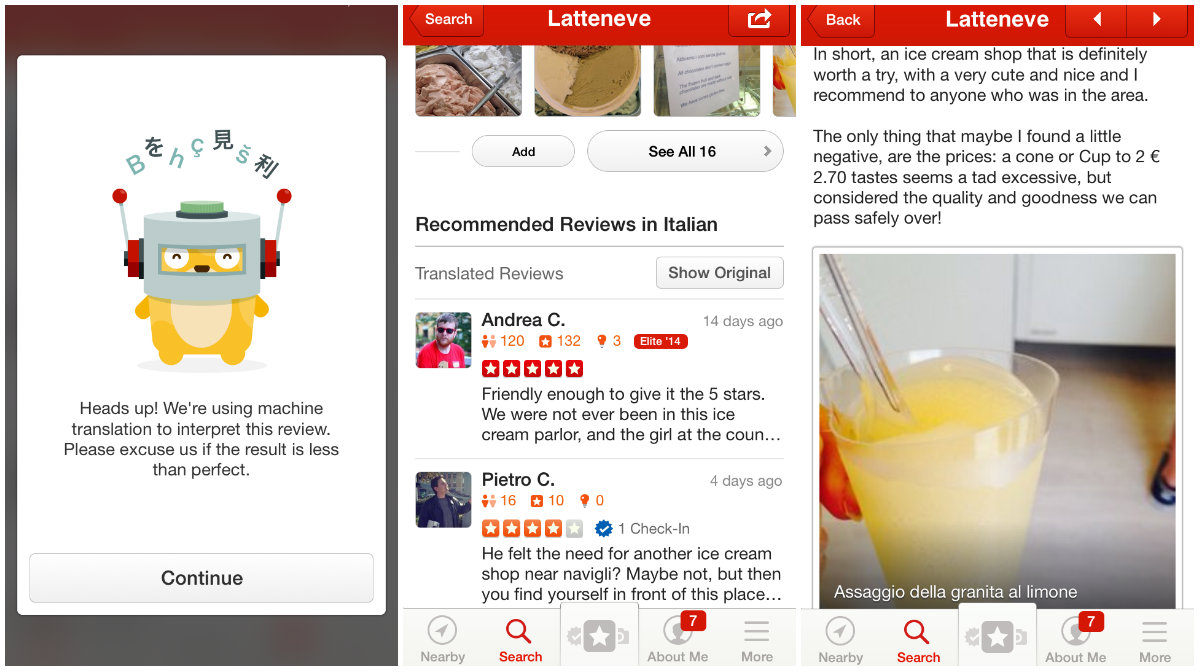 Yelp announced a new feature for its mobile app this week called ‘automated review translation.’ The feature will allow users to translate foreign language reviews with the tap of a button, making it the perfect companion for folks traveling abroad.

Reviews are translated using Microsoft’s ‘Bing Translator’ tech, and can be done one at a time, or as a group. Yelp says that the feature works for all 15 of its officially supported languages, which includes German, Dutch, Spanish, Italian, and French…

Since 2004, the Yelp family has grown to include 27 countries, allowing Yelpers to write reviews in 15 languages. We want to make it even easier to tap into the rich, local wisdom in Yelp reviews, so today we’re announcing a brand new feature on the Yelp iPhone app: automated review translation!

Picture this: You’re vacationing in Milan and want to try the best gelato in the city. Although there’s a gelato shop on every corner, you want to find the real deal – a spot that isn’t overflowing with tourists. You whip out your handy Yelp app to begin the search, but find yourself wishing you paid more attention in Italian class in high school. Now you can discover recommendations straight from the local experts themselves, no matter what language they speak.

Yelp wants to make sure that you understand that machine translations aren’t perfect. But in most cases they can provide enough context to help you understand the overall meaning of a review, which would’ve otherwise been completely unavailable to you.

Also worth noting is that Yelp is baked right into Siri. So all you’d have to do to find a good local bar or restaurant while in another country is simply tell the assistant what you’re looking for, and let the Yelp app’s new 1-tap translation feature handle the rest.

If you want to check out the new feature for yourself, you can find the Yelp app in the App Store for free.