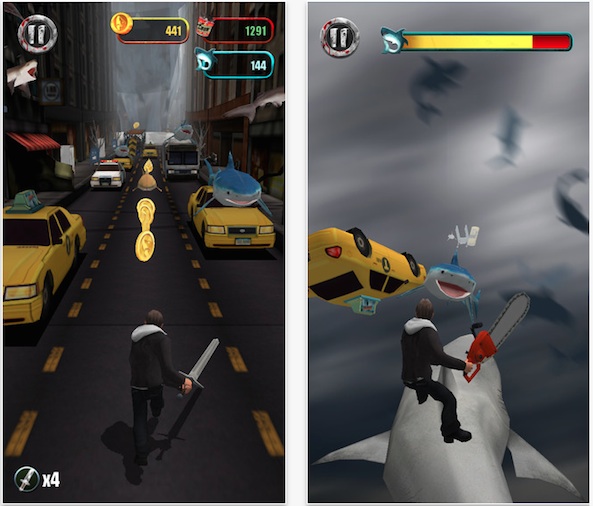 After much trepidation, I finally decided to give the goofy action film “Sharknado” a try. If you haven’t seen it, the movie is about a freak storm that lands hundreds of man-eating sharks into the greater Los Angeles area. Hilarity ensues. It is one of those so-bad-it’s-good type movies.

Sharknado: The Video Game recently launched in the App Store and, in light of the fact that Sharknado 2 premiers Wednesday, July 30 on the SyFy Channel, I thought I’d tell you all about it…

The game is basically an endless runner with a Sharknado skin, but there is much more to it than simply running and ducking through the city streets. You’ll be surfing in Manhattan, riding the back of a shark through a twister, and chopping up sharks with a chainsaw. 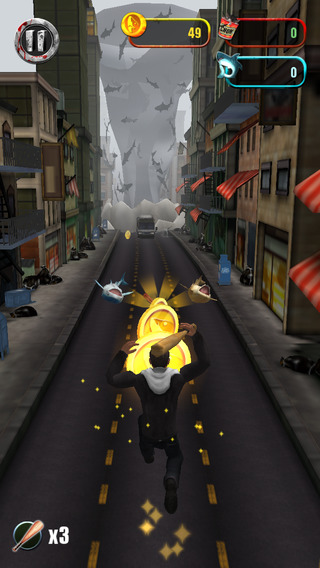 Players direct Fin down the streets of Manhattan, avoiding traffic, collecting coins, and smashing sharks with whatever weapon he can find.

Grab a baseball bat as you travel down city streets and tap the screen to bash sharks into a bloody mess. Collect coins that can be used to upgrade your weapon to something that does a bit more damage, like a golf club or a broad sword.

You’ll have the opportunity to kill a variety of sharks, like the Mako, the Hammerhead, and even the elusive Megamouth.

To bring more sharks into your reach, drop some chum. This will get the sharks’ attention, but will also make your game harder. If you don’t have a weapon, you can’t kill them and avoiding them is harder than you’d think. 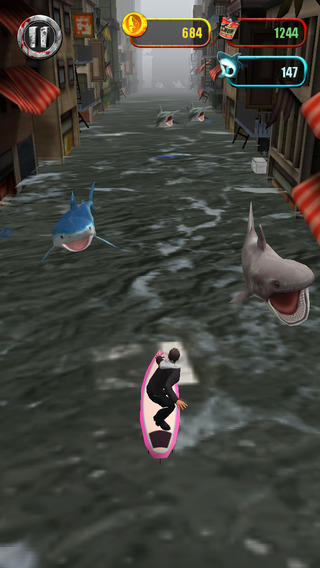 While running down the street, avoiding obstacles, grab a surfboard to start the water run. My favorite part of the surfing level is the song. “Go, go, go, go, go, go, go / Run away from the Sharknado.” I’m not joking. Those are the lyrics.

While in surf mode, you’ll be able to pick up a chainsaw and suddenly, you’ll be transported into the eye of the tornado that started it all. You’ll also be riding atop a shark while wielding the aforementioned chainsaw. Slice your way through oncoming sharks while avoiding flying tables, chairs, and cars.

Sharknado is normally priced at $2.99, but is on sale today only for $0.99 to celebrate tonight’s premier of Sharknado 2 on the Syfy channel. Pick it up in the App Store today.