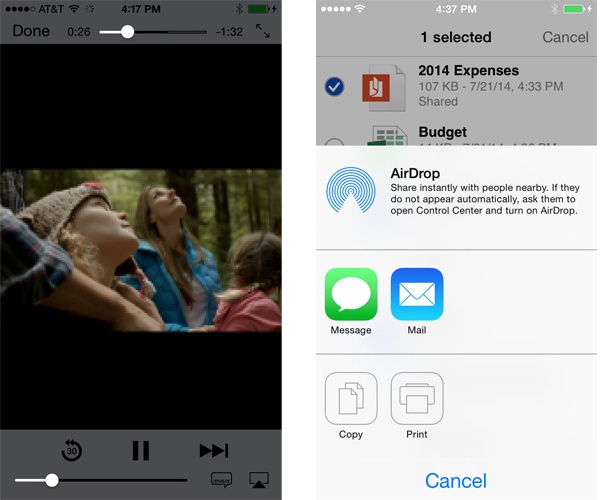 Having more than doubled free OneDrive tier from seven to fifteen gigabytes of cloud storage, Microsoft today rolled out an update to its free OneDrive client for iPhone and iPad.

In addition to the inevitable bug fixes and performance improvements, OneDrive now lets you share files via Apple’s AirDrop technology and includes HLS support which lets it adapt to your available bandwidth when video-streaming…

If you need to share your OneDrive photos, videos, documents and other files in your OneDrive directly to other iOS devices nearby, you can do so because the app now supports AirDrop, Apple’s underappreciated device-to-device wireless sharing technology.

Speaking of which, AirDrop between iPhones/iPads/iPods and Macs will be possible when iOS 8 and OS X 10.10 Yosemite launch this Fall. As Microsoft has a nice OneDrive desktop app available, my guess is that it’ll gain AirDrop sharing soon after Yosemite drops.

Microsoft says that HLS support for streaming video could prompt you to get all the videos off your phone to free up storage space because OneDrive offers “a near instantaneous playback experience” when streaming.

Back in June, OneDrive got updated with a new camera backup feature for both photos and videos. And just recently, it gained the ability to back up just the photos, not your on-device videos – useful for people who are on a limited data plan and sync via cellular.

Download OneDrive for iOS free in the App Store.