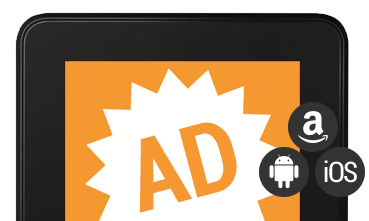 Amazon today said that its mobile ad network is now available on iOS. Makers of iPhone and iPad apps can now take advantage of Amazon’s Mobile Ads API to make money by inject into their apps banner and interstitial ads from premium advertisers participating in the Amazon Mobile Ad Network.

Moreover, the online retailer will add support for its own Fire smartphone beginning July 25, when it’s scheduled to launch…

According to Amazon’s media release, they’re also expanding ad serving to users in Spain and Italy across Android and iOS.

“Starting today, the Amazon Mobile Ad Network is serving ads to Android and iOS users in the US, the UK, Germany, France, Spain and Italy,” reads the press release.

If you’re a developer, this is how you can get started with the Amazon Mobile Ads API:

Ad targeting supports several options, such as geolocation (US only), age and gender.

For a limited time, when developers send the first ad request from a qualified app (now includes iOS), they will receive a guaranteed $6 CPM on interstitial ads, up to a maximum of one million impressions per app per month.

This document has more information on Interstitial ads.

You may also want to consult Amazon’s developer portal, the Quick Start Guide for iOS and blog posts with tips on ad mediation and tracking ad events inside apps.