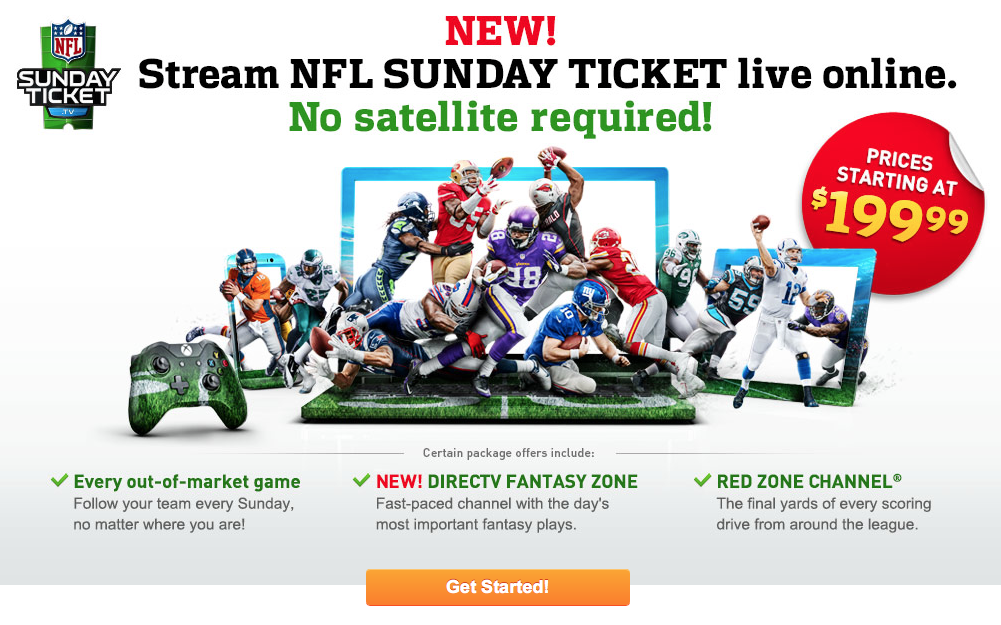 NFL Sunday Ticket has announced today that it will be offered as a standalone subscription package for the first time this year. Access to the popular TV sports package, which was once exclusive to DirecTV subscribers, will be available to everyone in the 2014 NFL season for a 1-time subscription fee.

No official announcement has been made, but Sunday Ticket has put up a promotional page with details about the new service. It looks like subscription prices will start at $200, which again will not require DirecTV, and the content will be accessible from a number of devices, including iOS and Mac…

Here’s a blurb from the promo page (via AppleInsider):

Now you can access live, out-of-market NFL games without a DIRECTV satellite TV account—no matter what team you follow! NFLSUNDAYTICKET.TV lets you stream games on your computer, tablet, phone, or game console. All while keeping up with real-time player stats and your fantasy teams.

NFL Sunday Ticket has long been accessible on iOS devices, but it previously required a subscription to DirecTV’s satellite service. Now users can pick from 3 standalone plans: $199.99 for access on computers and mobile devices, $239.99 for access on consoles, $329.99 for all access and Red Zone channel.

Unfortunately, the website doesn’t mention anything about Apple TV, and judging by Sunday Ticket’s past behavior, the mobile apps won’t support AirPlay. Apple’s set-top box offers support for other streaming sports services, including those for professional basketball (League Pass) and baseball (MLB.com).

The 2014 NFL season is scheduled to kick off on September 4. You can download the Sunday Ticket app for iPhone here and iPad here.