Ever since the iOS 7 jailbreak was released, there has been no shortage of tweaks for Control Center. Nonetheless, there’s always room for more refinements to iOS 7’s quick settings panel. CCSliders isn’t a new tweak, but, for the most part, it has remained tucked away in a third-party repo without a lot of attention. That is, until now.

CCSliders allows users to tap on icons to the left or right of the brightness slider in Control Center to cycle through several other types of sliders, including media volume, ringer volume, and flashlight brightness. There’s even an add-on for a f.lux slider in the same repo. CCSliders is simple in concept, but it adds unique and handy functionality to iOS 7’s Control Center…

In the tweak’s settings is the option to rearranged the order in which the sliders are cycled. By default, Control Center automatically displays the first slider in this list when invoked, but this setting can be turned off to display the last slider used when Control Center was previously open. Additionally, users can opt for CCSliders to display the title of the current slider at the top of Control Center.

Personally, my favorite option is the ability to cycle backwards through the sliders by tapping the left icon. This allows for quickly going back to a slider that was accidentally passed by without having to continue tapping through the entire list to reach the desired slider. 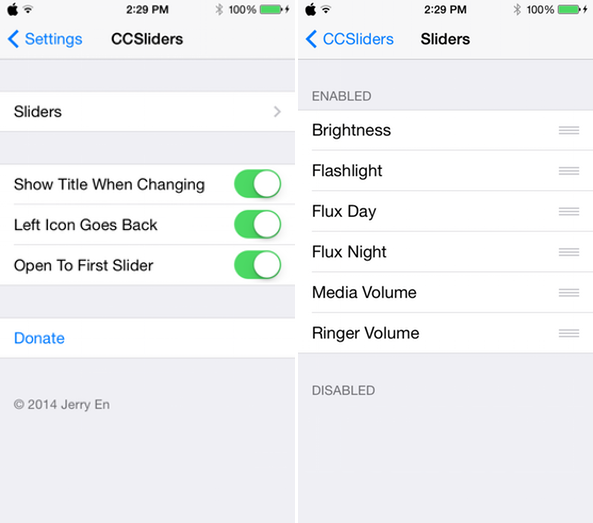 CCSliders is fully compatible with a variety of existing Control Center tweaks. However, it’s only semi-compatible with tweaks such as Auxo 2, in that it still plays well with iOS 7’s stock Control Center on the lock screen, but doesn’t work with Auxo 2’s modified sliders. Even regarding Auxo 2 users, this is still a great tweak for quickly adjusting brightness, volume, and f.lux levels from the lock screen.

The optional f.lux CCSlider add-on introduces two additional sliders to the mix: one for adjusting f.lux lighting during the day, and one for nighttime levels. This is a great excuse to tuck the f.lux app somewhere in a folder, as the add-on allows its levels to be easily managed from anywhere on iOS.

Both CCSliders and f.lux CCSlider are available absolutely free to those with Jerry En’s repo in their Cydia sources: http://cydia.jerryen.com/

There’s no reason to sit this one out, so let us know what you think about this tweak in the comments below.