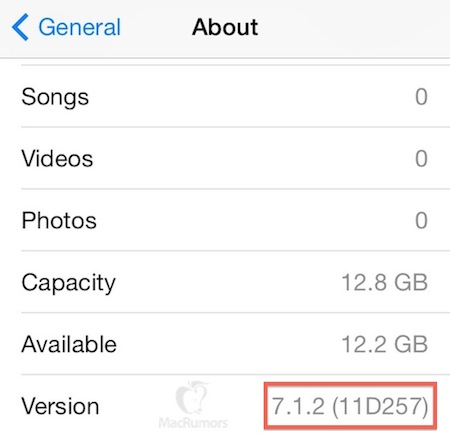 Apple is preparing to release iOS 7.1.2 in the coming weeks, according to a new report from MacRumors. Citing sources familiar with the update, the site says Apple plans to use the release to address a handful of long-standing issues.

Perhaps the most prominent issue the firmware will resolve is the ’email attachment encryption bug’ that surfaced last month. It also includes a fix the just-publicized Lock screen vulnerability, which could allow access to limited apps…

MacRumors has now learned that Apple is indeed nearing a public release of iOS 7.1.2 and has begun seeding carrier partners with a version of it, termed build 11D257.

According to sources, the build of iOS 7.1.2 does indeed address the email attachment encryption issue, as well as a bug in downloading emails. Also included in the update is a fix for a lock screen vulnerability that could allow access to “limited apps”. While we can’t say for certain, Apple may be referring to the “missed call” lock screen bug publicized earlier this month.

Last month, security researcher Andreas Kurtz published a report claiming that iOS 7 stores email attachments in unencrypted form, making them easily readable in the right conditions. Of course, jailbreakers have had a fix for a while now.

Additionally, Slivka says that iOS 7.1.2 will include improvements to iBeacon connectivity and a bug fix related to data transfer with third-party accessories. Unfortunately, there’s no explicit mention of any kind of iMessage-related bug fix.

There’s no word on when iOS 7.1.2 will be released, but Apple has apparently asked carriers to sign off on the update by Friday, June 27, suggesting that a public release could come the following week. Obviously, jailbreakers will want to stay away.