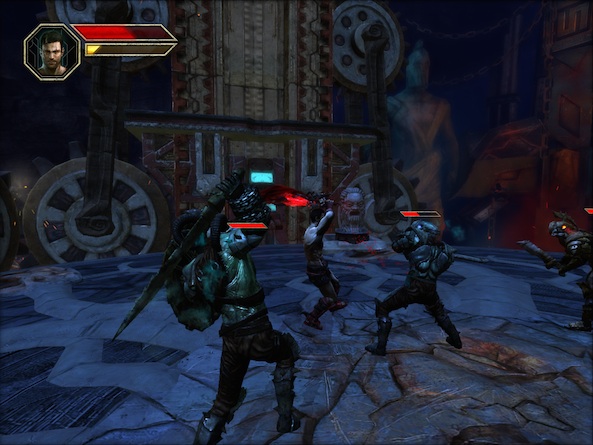 These days, game developers are trying harder than ever to push the boundaries of what is possible with mobile gaming. No, we still aren’t there yet, but every day brings us closer to console quality gaming in the palm of our hands.

Godfire: Rise of Prometheus is one of those games that maxes out the iPhone and iPad’s abilities by offering a graphically complex game with fast action gameplay in a fairly large world. Read our game review of Godfire below…

This epic fantasy story is set in a world where gods and demons are fighting each other for supremacy. The detailed landscape is full of fire and brimstone, as well as fierce minions and brutal bosses. The story is split up into acts and your hero must fight his way through rounds of enemies to get to the big bad guy.

Players earn gold when defeating foes. They can also find loot in treasure chests and vases along the path. Some chests must be unlocked by solving puzzles. Kick over vases to destroy them.

Gold is used to upgrade a hero’s stats or purchase better gear. Gear changes are reflected in the character’s physical attributes. If you add a helmet, it will appear on your hero’s head in the game.

The graphics are pretty amazing, especially on the iPad. Close attention was paid to making sure the game feels immersive and expansive, even though it is on a mobile device. The characters have detailed faces and identifiable markings. Movement during battle is fluid and fast.

The game’s soundtrack fits perfectly with the world. Songs have a sense of urgency, which plays into the back-to-back fights that the hero must endure to get through each act. The voice acting is incredibly good here. I usually roll my eyes at the overacting of role-playing adventure games, but this has just the right amount of realism. 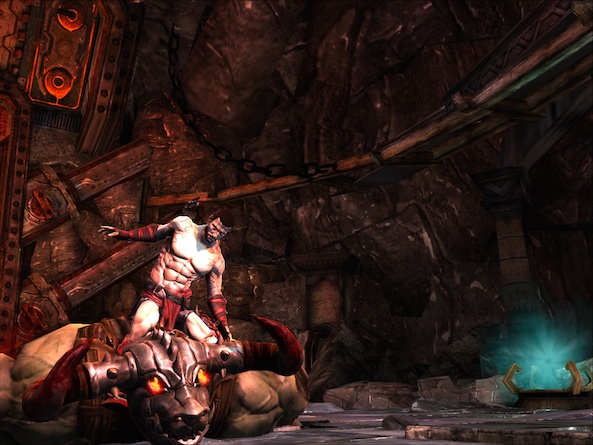 The game is split into acts. At the beginning, you learn a bit about the hero, Prometheus, and his quest to find the Godfire Spark. He joins up with a masked goddess who claims to want the same thing as Prometheus; to bring the Spark to humankind so they can use it to better their world.

Prometheus ends up in the deepest depths of the human world, trying to track down the missing Godfire Spark while being attacked by all manner of demons. The Titan that Prometheus was fighting at the beginning of the game is pitting these enemies against him to try to stop his progress.

Players start by fighting groups of minions to learn how to move, attack, and block. The controls are based on a virtual stick controller and shield button on the left side of the screen, and two virtual attack buttons (quick attack and heavy attack) on the right.

Prometheus has a health and wrath bar that you must pay attention to. Wrath is used for heavy attack and runs out if you use it too often. You can earn both health and wrath points during battle. Special combo moves will generate points and killing an enemy gives larger amounts of points. Tap the quick attack one, two, or three times to trigger a variety of different combos to execute on enemies.

When the wrath meter is full, you can perform a special powerful attack that will send your enemies flying and even kill some of them with one blow.

When an enemy is week, a finisher button will appear. Use it at the exact right moment to perform a cinematic finishing move, like stabbing out a demon’s eyes. Finisher moves will reward you with health and wrath boosts.

Each act consists of a number of minion waves. Prometheus will move to a spot and it will automatically trigger the fight. He will draw his swords and the battle begins. Players must fight groups of minions, usually only three or four at a time, but new ones will appear as old ones are destroyed. After you’ve killed all minions in a round, you will be free to explore again until the next minion battle.

Eventually, you’ll get to the end boss of the act. Bosses are incredibly difficult to beat if you don’t know the trick. I’ll give you a hint. Tire them out before attacking. Otherwise, just stay out of their way.

After defeating a boss, you’ll earn experience points, special items, and gold. Head to the armory and upgrade your weapons and stats before heading into the next act. Then, the battle starts all over again, but in a new environment. 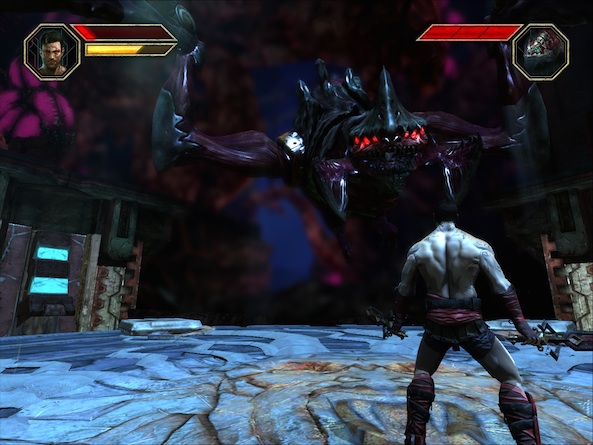 I love the way the game looks. The campaign is deeply immersive. There are cut scenes throughout the game that unveil more of the story. Because the voice acting is so good, it almost makes it like an interactive movie.

It supports MFi controllers, which is awesome for this type of game. Since combat is based on movement, combo attacks, and blocking, a physical controller is a nice alternative.

As much as I enjoyed this game, I have to say the battles feel a bit repetitive. You fight groups of minions, one after another. And then you fight a boss, which can be beaten using about the same strategy as previous bosses.

I’d like to see more variety in the end boss battles. Each boss should have its own power, as well as weakness, that are uncovered through trial and error.

Godfire: Rise of Prometheus costs $6.99. Although it may seem steep on first impression, the price tag is about average for games of this caliber. The developers promise regular free content updates with new stories, arenas, weapons, and more in the future, so your money will be used for ongoing gameplay. Plus, if you beat the whole game, you can always try your skills in Survival mode for special power ups and increased ranks in Game Center.

This is definitely an amazing looking game that truly pushes the limits to which mobile gaming can go. If you are the type of gamer who is always looking for titles that take the next step in the advancement of technology, this is your bag. The graphics are detailed and the landscape feels expansive. The gameplay may be somewhat monotonous, but it did not deter from my enjoyment of the overall experience. The storyline is immersive and worth the price for fans of story-driven RPGs. This game is available on the iPhone, iPad, and iPod touch. Download it in the App Store today.

The concept is similar to Infinity Blade III, and I don’t mean it has swipe-to-attack controls, but it has a similar battle wave style.

Are you planning on investing in Godfire? Have you played it yet? Let us know in the comments below.