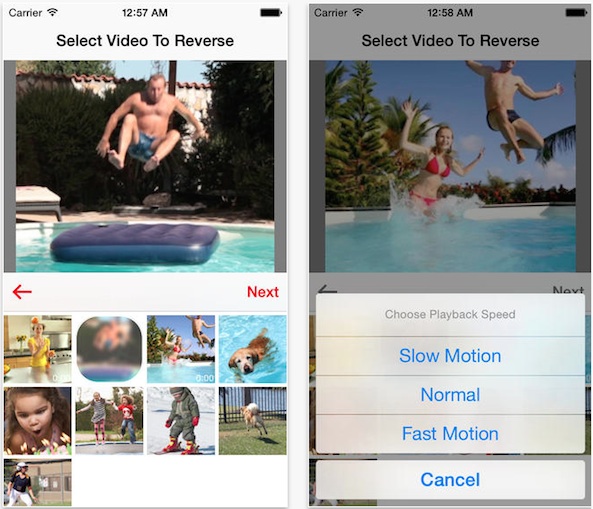 So, there may not normally be any reason why a person would want to reverse a video (audio included) other than to goof off. However, goofing off is my favorite pastime, so turning something so simple as a cat video into a hilariously bizarre short art piece is something I can’t resist.

Reverser: Backwards Slo-Mo is a video-editing app that turns your clips inside out and upside down. Well, at least it reverses the video and audio for some fairly interesting effects… 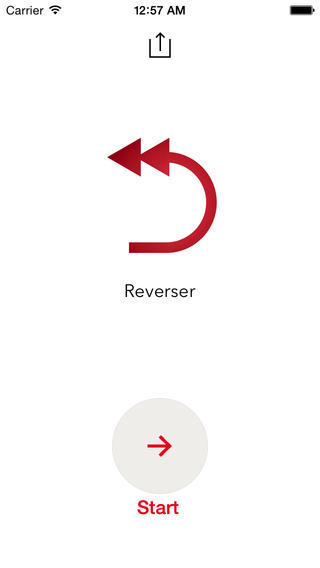 The app is incredibly easy to use. When you open the app, you will see a big red arrow calling you to reverse a video. Tap the Start button to access your camera roll’s video list. You can’t take any video from within the app. It will only make use of what you’ve already filmed.

Select the clip you wish to reverse and hit the “Next” button. The app will reverse your video. It will take just a few seconds, depending on how long the original is. When the process is complete, the reversed video will be automatically saved in your photo library. 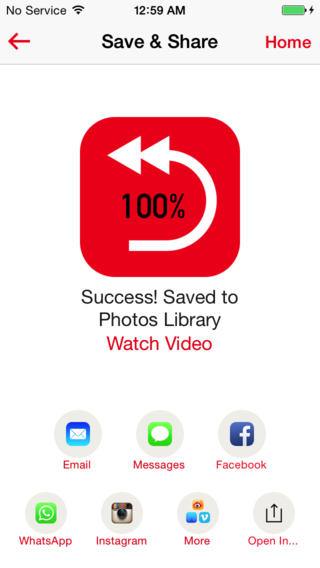 You can reverse the video in slow motion, fast motion, or normal speed. This makes for some hilarious or creepy footage. I reversed a clip of my cat playing with a toy in fast motion and it made me giggle until my eyes watered. The audio was my favorite part. I could hear the scratch and clicks of his claws on the hardwood flooring.

The reverse with slow motion turns even the most innocent of video clips into something from a 1970s horror film. I happened to have a short clip of my nephew singing along to the Walt Disney classic “It’s A Small World” as we were entering the ride. When reversed and slowed down, it looks like something straight out of a satanic training video. This also made me laugh until I was streaming tears. I thought it was so funny that I decided to share it with all of you.

Reverser is free to download on the iPhone. According to the app’s developer, a new version is in the pipeline, which will allow users to add a watermark to their video through an in-app purchase. However from an email sent from the dev, “Anyone who gets it before the new version goes up will be grandfathered.” There is also an iPad version underway for the future. Download it in the App Store today.

What do you think of my video? Do you think you will try it out for yourself?