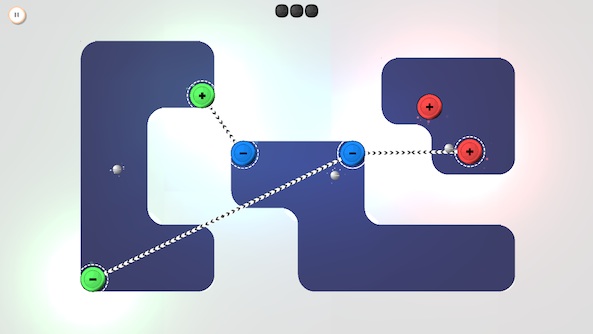 Science. What a fun subject. You learn about the elements, sound waves, viruses, and all kinds of amazing stuff that exists in our universe. However, when I was in school, I don’t think anyone would have claimed that the subject was fun, exactly. Too bad there weren’t more cool video games to play that would help me identify with what I was learning.

iON Bond isn’t particularly educational, but it does take the basic concept of particle collision and turns it into a fun puzzle game. Check out our game review of iON Bond and see if it is something you’d like to play…

The game is based on the principle of bonding and colliding subatomic particles. There are various colors of particles, which look a lot like buttons, each with either a positive or negative charge, represented by a plus or minus symbol. The goal is to bring together matching colored particles so they collide and disappear.

Each stage features at least two particles, surrounded by empty space and usually blocked in some way by either walls or black matter. Additionally, each level includes three neutrons, which can be collected by passing particles before they eventually collide with each other.

To bring matching colored particles together, drag your finger from one to the other to form the bond. If the particles carry opposite charges (one positive and one negative), then they will move toward each other until either they crash or something stops them from meeting, like a wall.

If two matching colors carry the same charge, you can’t bond them directly. A negative will push away from another negative. In these instances, you must use the other objects on the level to manipulate particles into each other’s path.

The walls are white. Paths can be created over them, but particles can’t pass through them. Black matter is, of course, black. Don’t come anywhere near black matter or your particle will be destroyed.

In addition to moving, colored particles there are white ones that don’t have to bond in order to complete a level, stationary ones that you have to figure out how to attract others to. 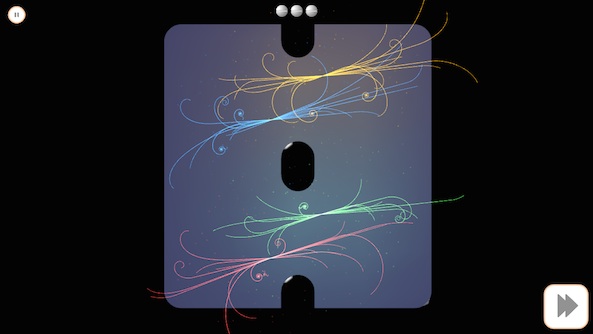 The goal of the game is to collide all colored particles to clear the board. A secondary, but not necessary, goal is to collect all three neutrons before the board is clear. In order to progress from one world to the next, you must collect a certain number of neutrons, so don’t think they aren’t important to the cause.

Players are first shown a tutorial that lasts 10 levels. Each level introduces new elements, like white particles and black matter. Once you’ve got the basics down, you’ll be able to solve the puzzles on your own. That is, until another new element is added.

As noted above, to bond like-colored particles, create a link from one positive to one negative. Touch one and drag your finger across the screen to the other. As easy as that sounds, it is almost never as easy as that.

Sometimes, the particles of the same color carry the same charge, therefore will repel each other when a bond is created. The only way you can bring them together in a case like this is by manipulating them using other objects on the board. For example, you can bond two different colored particles and bring them together. They won’t collide with each other, but it will make them move in different directions, which could bring two matching colored particles together, even if their charges are the same.

Sometimes, particles are stuck in walled-in areas and must be moved around before getting close enough to their mates. Similar to the above scenario, players can manipulate particles by linking them to non-matching colored ones. They won’t collide, but they will bond and either attract or repel each other.

There are lots more particle attributes and level obstacles to discover as you play the game, but remember that you’ll need to collect a certain number of neutrons in order to progress to the next world. 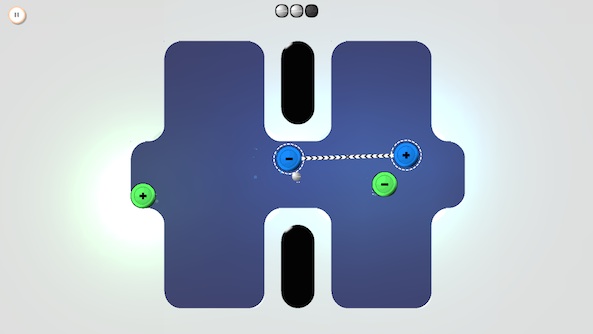 This is a great puzzle game with the exact right level of difficulty. It feels like playing a game of chess because you must think ahead to ensure that you don’t accidentally collide particles that are necessary to move other ones. The puzzles get harder as you progress, but give you enough time to grow with the difficulty.

I wish there were more levels. It isn’t as though the game is too short. I just love it so much that I wish there was more. Hopefully, the developer has plans for additional levels in the future. I’d even be willing to pay an additional buck or two for an in-app purchase that brings more content.

iON Bond costs $0.99, which is the perfect price for a game like this in the puzzle genre. The levels are challenging enough that it will take time to get through everything, even though there are only 70 of them. The replay value is high since you earn extra points for getting all neutrons. If you aren’t successful the first time, you can go back later and try again.

Fans of physics-based puzzles will enjoy this game. It requires you to think three steps ahead in order to plan for difficult moves. As the game progresses, new elements and attributes are added, keeping it from becoming mundane. If you are a fan of the genre, you should check this one out. The game is available on the iPhone, iPad, and iPod touch. Download it in the App Store today.

Although not quite as science-y, this game reminds me of Atomic Fusion: Particle Collider.

How ‘bout it? Are you planning on downloading iON Bond right when this sentence is…. done?