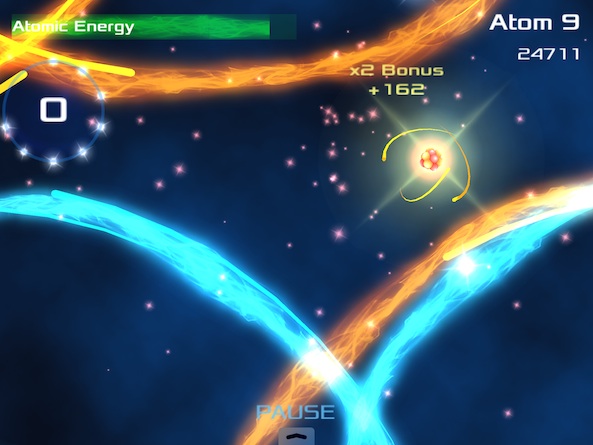 Have you ever wondered what it would be like to be a Quantum Physicist? Probably not. There are not a lot of seven-year-olds running around wishing they could study electrons and protons when they grow up. Think about it, though. Atoms are pretty cool.

Atomic Fusion is a science-based game that is educational, but not the “Oregon Trail” kind of educational. This game is actually fun (I know I’m going to get some flack for that)…

This is a basic arcade game. Players must move a photon through space, trying to collect energy by turning it into matter and anti-matter. Tap the screen to switch between the warm-colored and cool-colored photon as you pass through ribbons of energy. When you collect enough energy, your photon will grow into a “bigger” element on the Periodic table.

The screen is filled with bright, glowing streams of energy. Players collect points by collecting energy. The more you collect, the higher your Atomic Energy gets, which will eventually fuse atoms to create the next element. You can also collect electrons along the way that can be used to clear the screen without having to switch between matter and anti-matter.

In addition to collecting electrons so you can set off massive charges, you can pick up bonus items, like plasma waves and electromagnetic energy. Basically, these are the types of items that give you additional shielding or gathers all electrons to you magnetically. 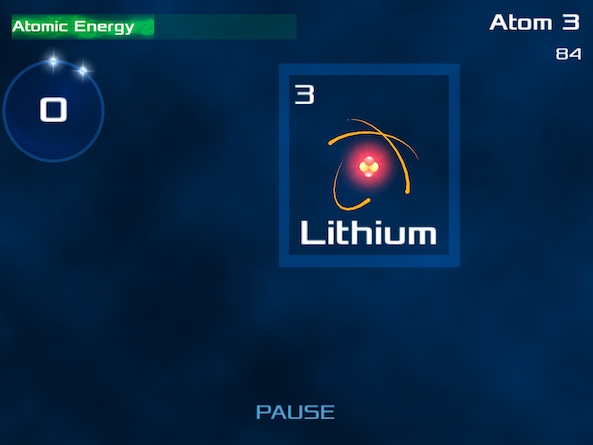 Players start off as Hydrogen. The game is very slow to start. You will be shown a simple tutorial that explains how to move and what to do. Once you are on your own, your photon will turn into Helium and you will be ready to collect Atomic Energy.

Some ribbons look like they are in the process of changing from one color to the other, so be sure you collide with it at the right time. Oftentimes, one ribbon will be directly behind the other, so quick reaction time is very important.

As your photon grows from Helium, to Lithium, to Beryllium, and so on, it will grow. Not in size, but in shape. As you fuse atoms, they stick to your photon so it has more nodes. For example, Hydrogen is one, single sphere, while Oxygen has eight nodes, connected to form one object.

As you fuse atoms, you will unlock new elements. Each element will have a bit of trivia listed with it. For example, Carbon is the strongest known substance and Neon won’t react with any other element.

The free download comes with 10 element phases, ending with Neon. The first five levels are pretty easy, but things get pretty tough after that. The rest of the 118 elements can be unlocked for a single purchase of $1.99. Plus, if you are good enough to fuse all 118 elements, you’ll be able to discover brand new elements. If you are the first to create a new element, you’ll be able to name it. 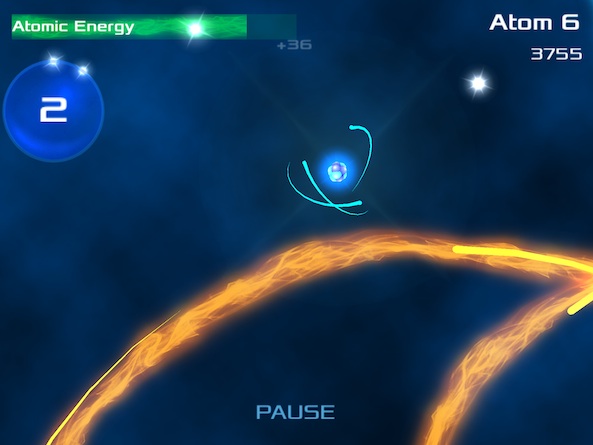 It may seem silly, but my favorite part of this game is fusing the elements. It is so science-y. It reminds me of junior high school.

Even though you’ll be getting a lesson in Periodic elements, you will still be playing a pretty exciting arcade game. It is less learning and more funning.

Not this time, guys. I just love this game. It is so fun.

The first 10 levels of Atomic Fusion are free. After that, the game costs $1.99. There are only 108 more existing elements. But, if you can make it through the entire list, you’ll have the opportunity to fuse and name a new element. Wouldn’t it be awesome to do that in real life?

Maybe it’s the science fan in me that really fell for this game (I am literally listening to “Here Comes Science” by They Might be Giants right now), but I definitely think it is worth checking out. Not only do you get to learn about the Periodic Table of Elements, but you also get to race around the void, bashing photons into Atomic Energy to create new elements. This game is available on the iPhone, iPad, and iPod touch. Download it in the App Store today.

ChemIQ is an educational game that requires you to solve chemical equations (remember those?).

Do you love science? Will you be fusing elements with this arcade app?