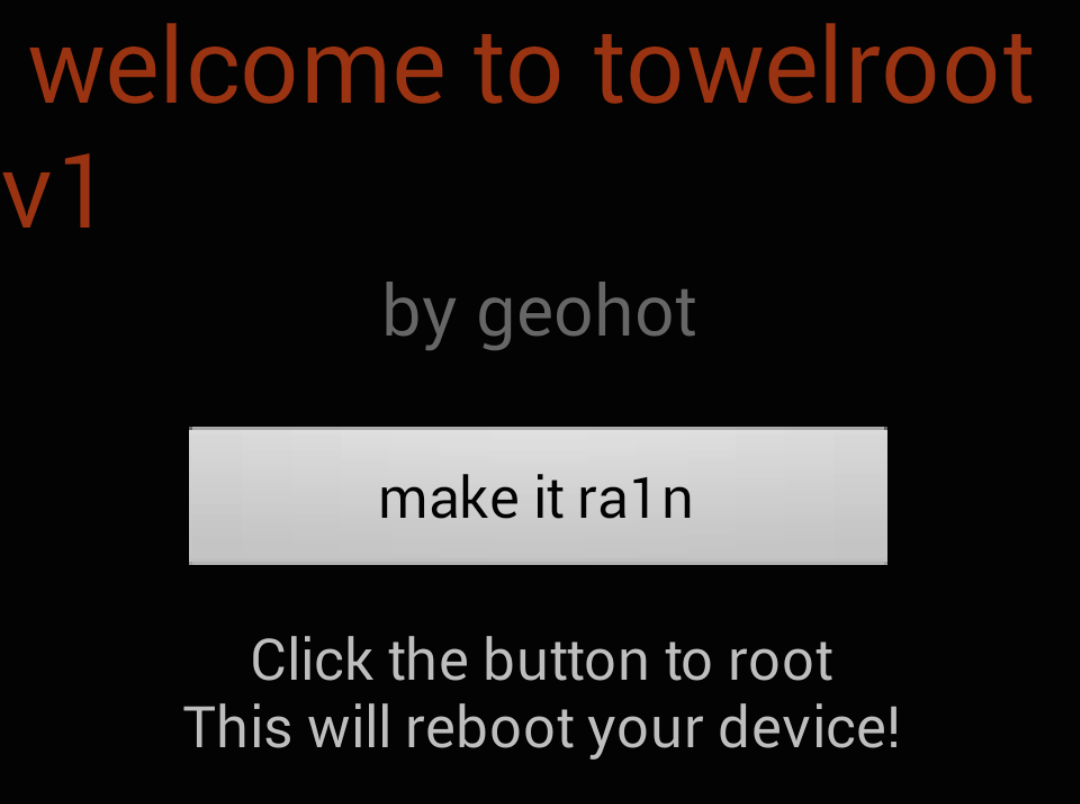 Geohot—a name that’s virtually synonymous with iPhone jailbreaking—has taken up quite a few different ventures since departing from the jailbreak scene. He’s dabbled in Playstation 3 hacking, and working at Facebook. He was even rumored to have been on the precipice of an iOS 7 jailbreak, but nothing formally materialized from him.

But yesterday, Geohot (real name George Hotz) made his name known on an even wider scale when he released a new rooting tool for the Samsung Galaxy S5 and other Android devices. The tool, which is called Towelroot, is a downloadable package that allows Galaxy S5 users to quickly root their devices. This is especially helpful for GS5 users on Verizon and AT&T, because those two mobile carriers lock the bootloader.

I’ve tried out Towelroot on my Galaxy S5, and it works just as described. In fact, it reminds me a lot of Hotz’s past jailbreak tools. Check inside for all of the details.

Like his previous mobile phone forays, Hotz’s latest tool is a simple easy-to-use and straightforward mechanism for opening up the phone to customization. In fact, Towelroot is a simple APK that can be downloaded on supporting Samsung hardware just by visiting the website towelroot.com. Once there, the procedure for rooting a device is extremely straightforward, as anyone who’s used Hotz’s prior tools would expect.

Given Hotz’s longstanding legacy among iPhone users, I figured it would only be right to show off a tutorial showcasing how easy it is to root the Galaxy S5 (and other devices listed below). Here’s how it works:

How to root your Galaxy S5 with Towelroot: 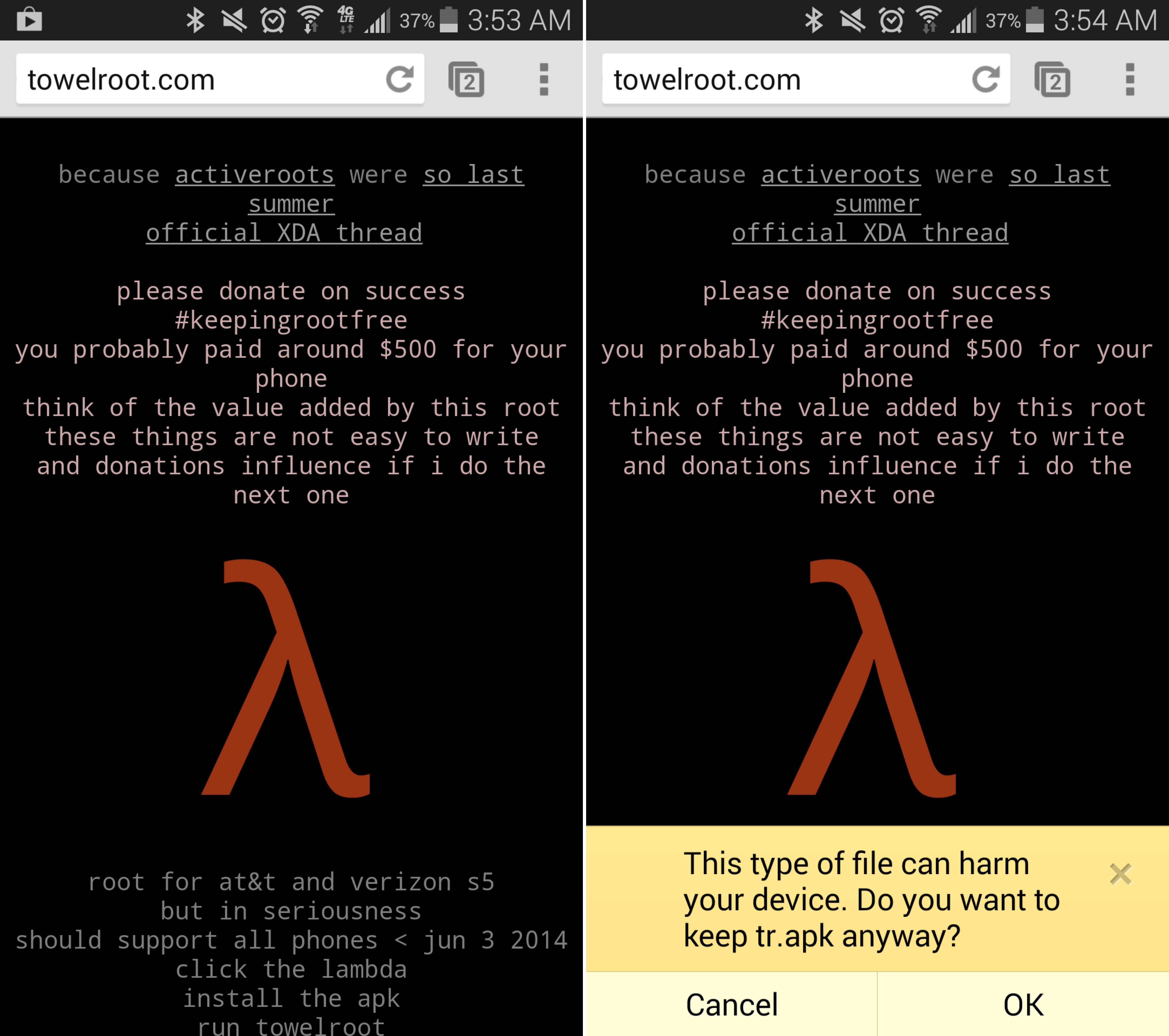 Step 1: Go to towelroot.com on your Samsung Galaxy S5. Tap the Towelroot image in the middle of the page to start the download. You will receive a warning that the .apk filetype can harm your device. Tap OK. 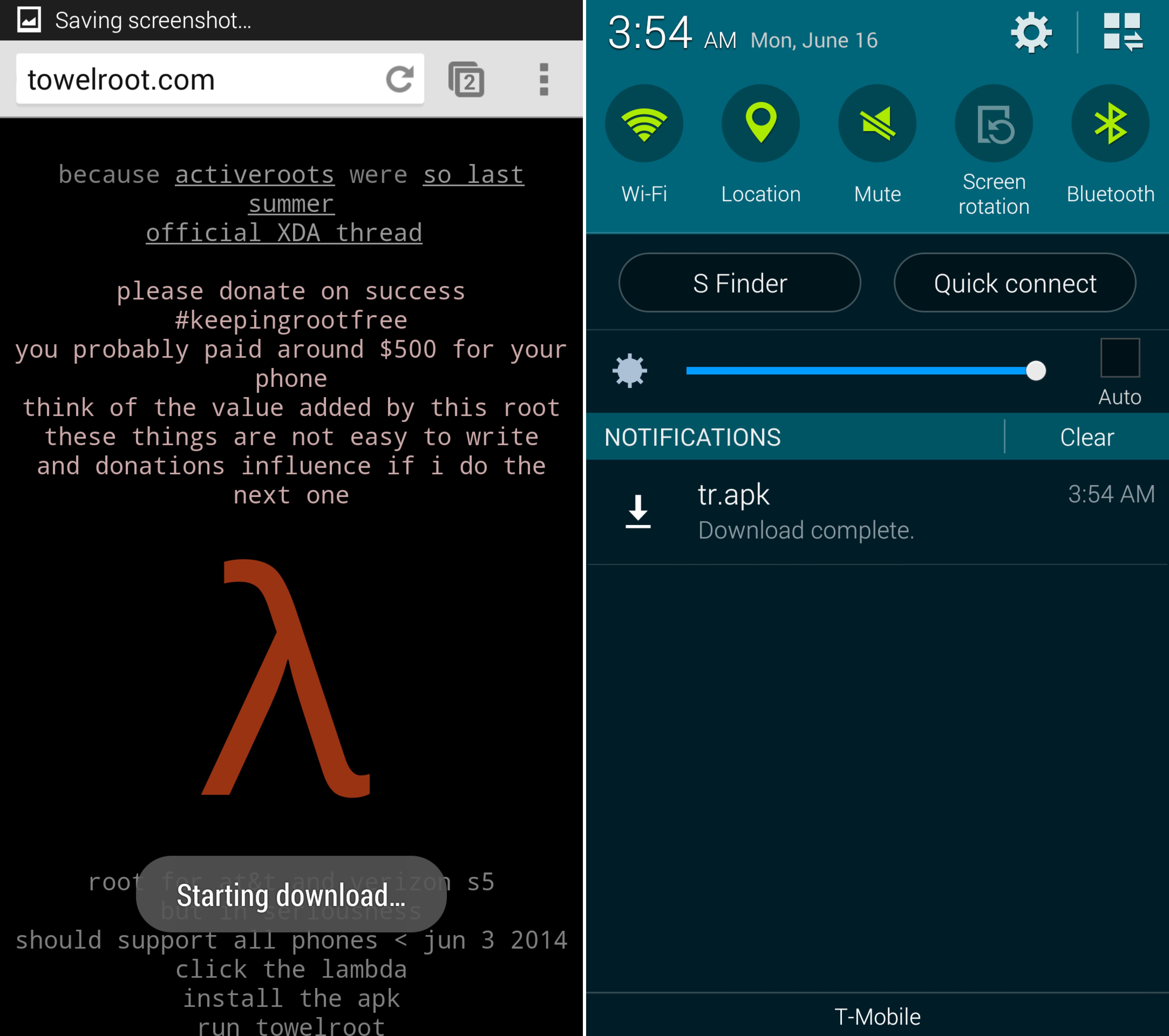 Step 2: You will see a brief “Starting download” message. Swipe down on the status bar to invoke the Notifications list, and tap on the tr.apk download to launch Towelroot. 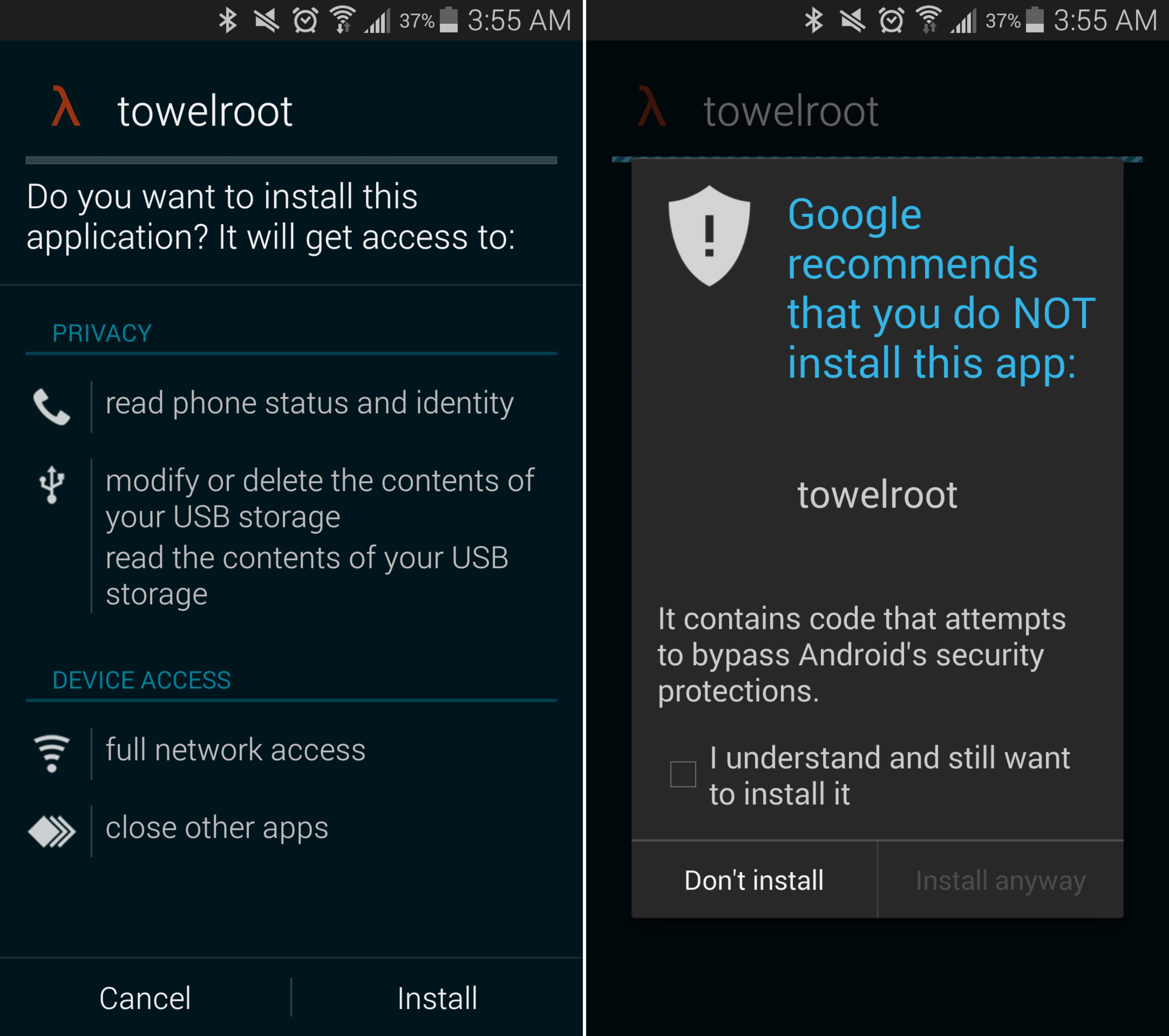 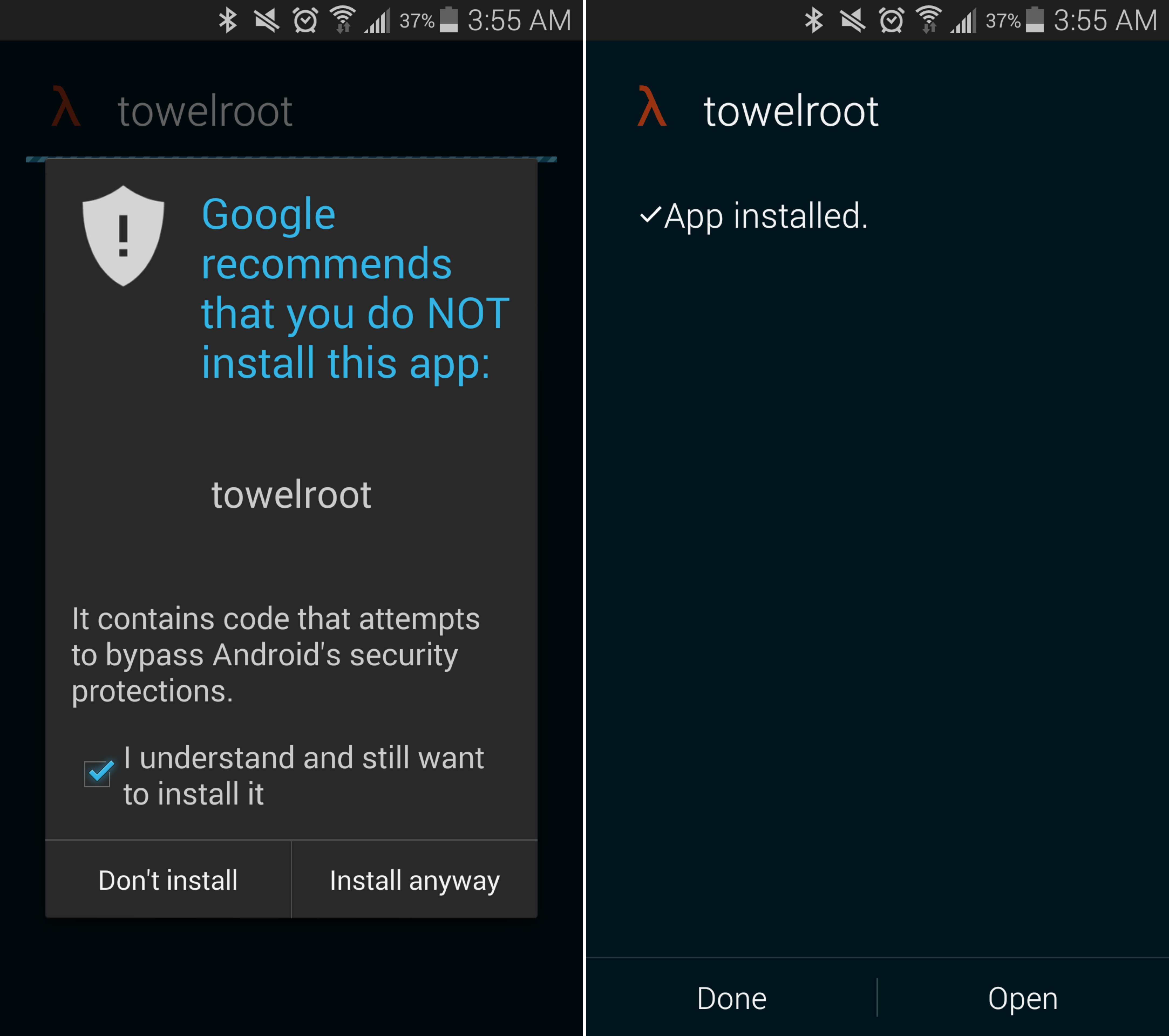 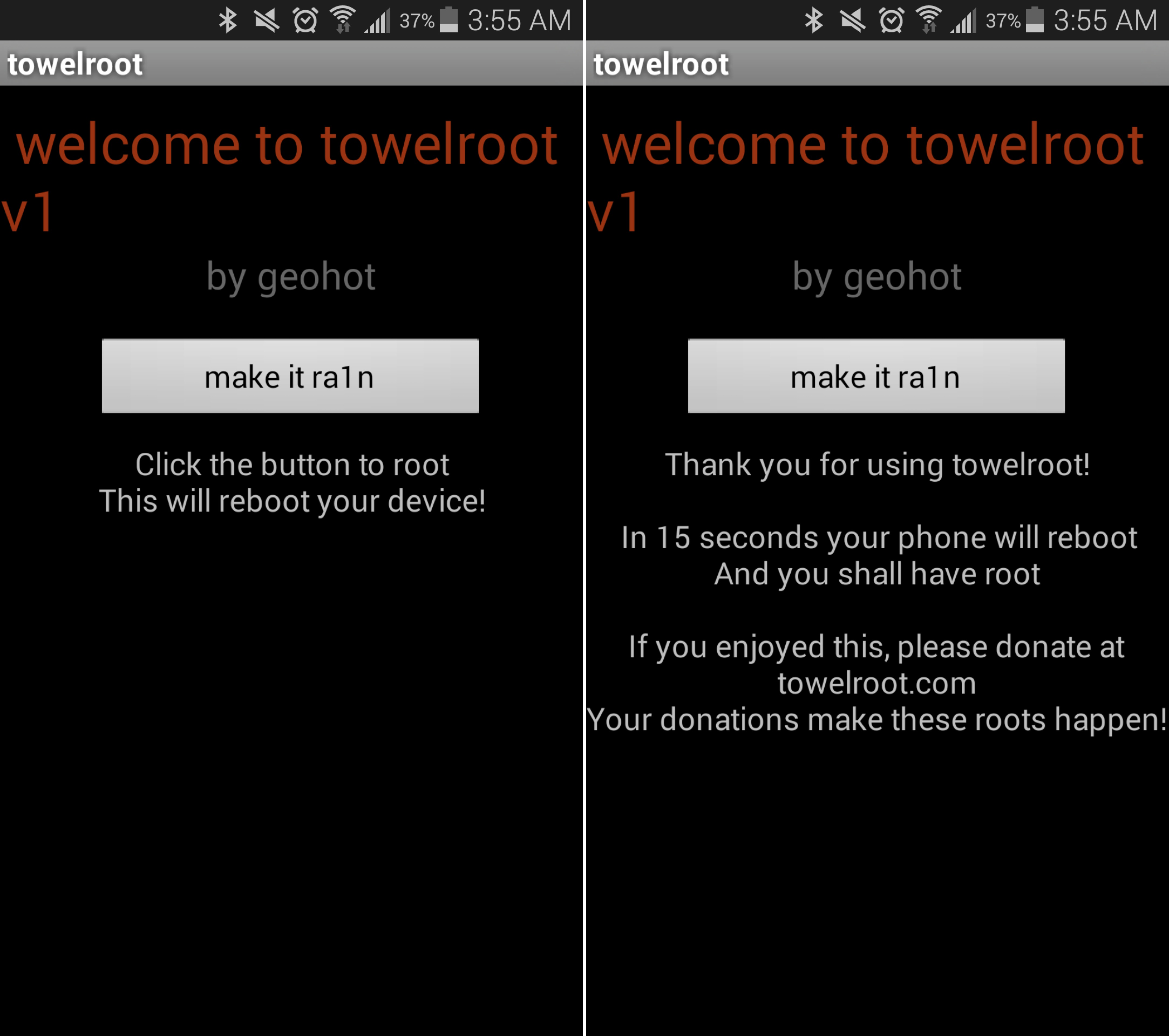 Step 5: Once Towelroot opens you will see a button that says “make it ra1n,” which is, of course, very familiar to us iPhone users who used Hotz’s blackra1n jailbreak tool back in the day. Once you tap the button, Towelroot will reboot and you should come back with a fully rooted device.

Given how complicated some Android rooting and hacking tools are, I think Towelroot is an awesome step in the right direction for Android users who want to get more out of their devices. Us iPhone users have had the privilege of enjoying some extremely simple tools like JailbreakMe in the past. While this tool isn’t on that level of simplicity, it’s not too far off.

This isn’t the first time that a prominent member of the iOS hacking community has done things for Android. If you can remember, Saurik, creator of Cydia, dabbled with Cydia Substrate.

Here are the devices that Towelroot supports thus far: