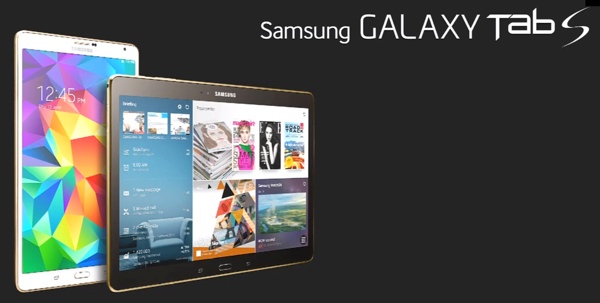 Samsung hosted an event in New York yesterday afternoon to take the wraps off a new version of its Galaxy Tab. It’s calling the tablet the Galaxy Tab S, and it includes a high resolution Super AMOLED display that comes in 2 sizes: 8.4 and 10.5-inches.

Perhaps one of its most interesting features, though, is its fingerprint sensor. It can recognize up to eight different users, and each scan will load a different custom user profile based on the fingerprint with personalized settings, app shortcuts and more…

On the hardware side, the Galaxy Tab S is all about the display. It’s a high-resolution (2560 x 1600) Super AMOLED panel that Samsung says has more accurate color range, better contrast, and higher outdoor visibility than any mobile LCD display on the market. 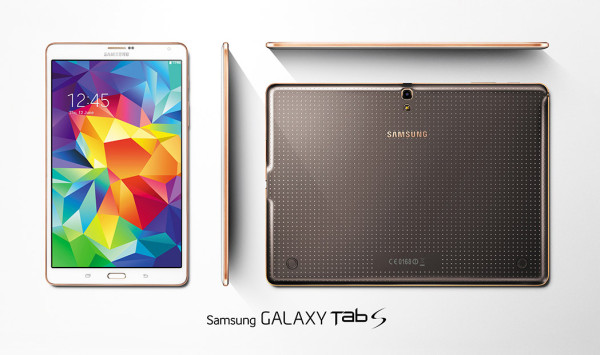 Again, this is all packed into either an 8.4-inch or 10.5-inch body, both of which measure just 6.6mm thin—that’s thinner than the iPad Air. Both tablets ship with front (2MP) and rear (8MP) cameras and either 32GB or 64GB of storage with microSD support.

Wi-Fi only models are powered by an Exynos 5 Octa processor, and LTE models utilize a Qualcomm Snapdragon 800 2.3GHz quad core chip. Battery life for both tablets is expected to be in the neighborhood of 11 hours, based on watching 1080p YouTube.

The Galaxy Tab S will ship with Android KitKat and Samsung’s TouchWiz interface. It’ll also come with a number of ‘Galaxy Gifts,’ which includes free trials for Google Play All Access and The Wall Street Journal, and a free digital copy of the movie Gravity. 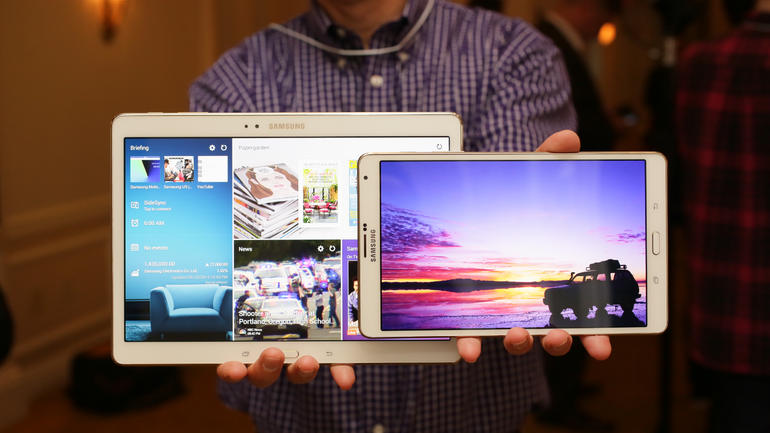 As far as features, we’ve already touched on fingerprint profiles and Kids Mode. There’s also Content Home, which allows users to switch between predetermined modes like ‘working’ or ‘watching Netflix,’ and Sidesync, which is similar Apple’s iOS 8 Handoff.

Both Tab S models will come in either Titanium Bronze or Dazzling White, both trimmed in gold to give off “an aura of luxury.” The Wi-Fi 8.4-inch version will be $399.99, the 10.5-inch $499.99, and both will launch in July. The LTE model will land later this year.

So, what do you make of Samsung’s latest tablet?