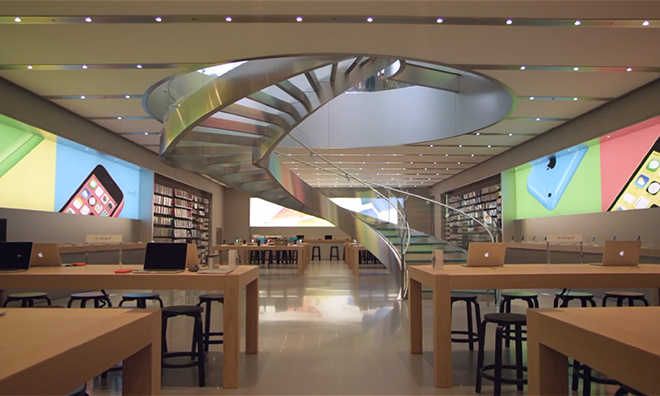 Last night, Apple posted a video to its official YouTube channel showing off its newest retail store in Japan. The store is located in Omotesando, Tokyo, and it includes a brushed aluminum staircase and other unique architectural features.

Photos of the outside of the store surfaced in May, showing what appeared to be a power-saving green curtain of foliage draped down one wall. But this new video from Apple takes you on a brief virtual tour of the entire multi-floor building…

Before the green vines went up outside the store, it featured an all-glass wall that would have inevitably let in a large amount of sunlight. The foliage curtain should help significantly cut down on air conditioning-related power consumption.

Apple says that all of its data centers, and some 94% of all its corporate facilities, run on 100% renewable energy. The firm’s VP of Environmental Initiatives said last month that their next major challenge is getting to 100% in all retail stores.

The Omotesando store is scheduled to open at 10 a.m. on Friday, June 13.