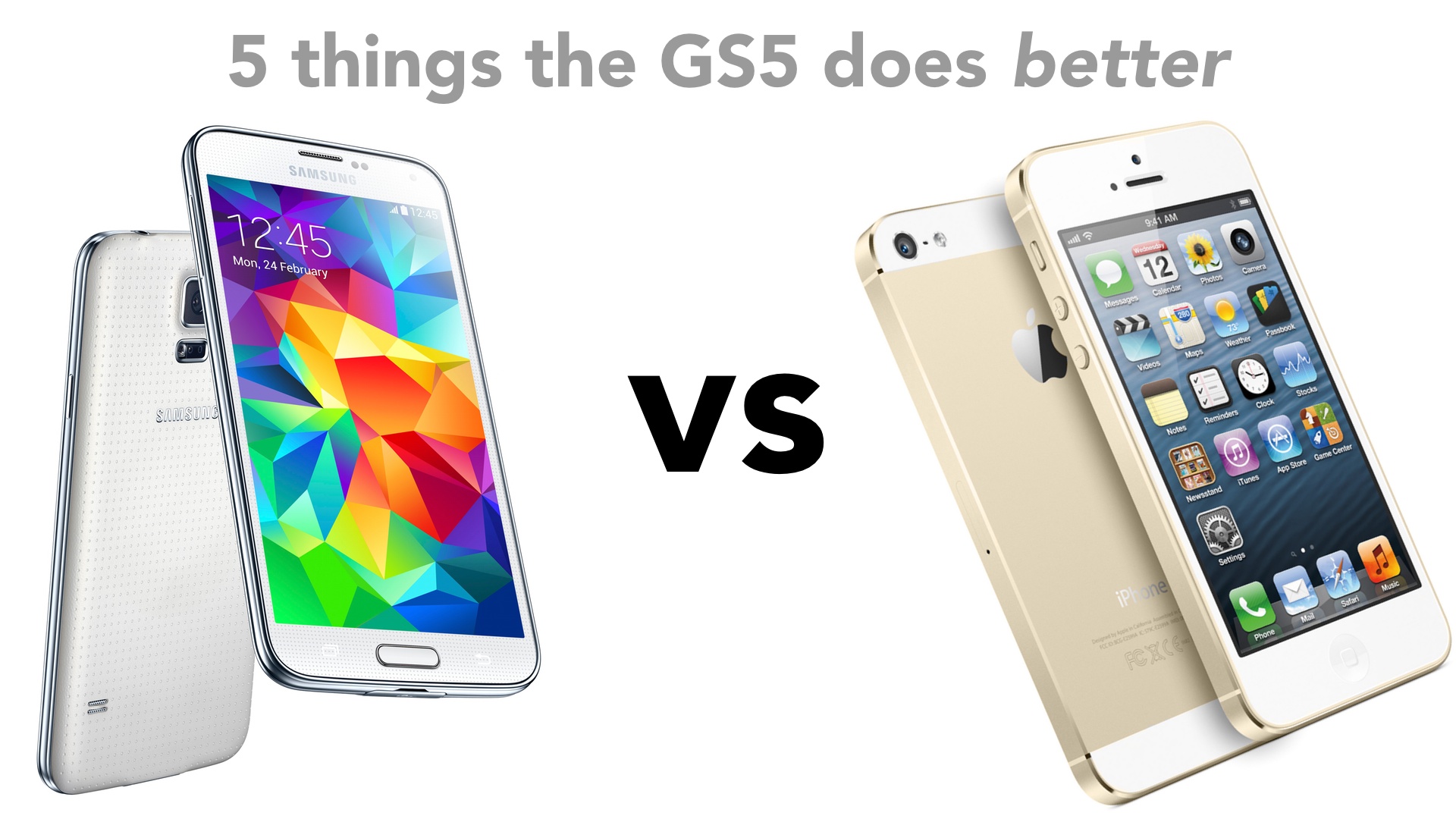 The Galaxy S5 has been my go-to device and my daily driver over the last month or so. I know that may seem like blasphemy since I write for iDownloadBlog, but I have a lot of reasons for doing so.

For starters, I wanted to become more familiar with the competition. I already had a good sense about Samsung’s offerings and Android in general, but nothing can replace hands-on usage and the balanced perspective that comes with that.

If I wanted to seriously be able to take an objective look at Apple and at Samsung, and at iOS and Android, then I would need to have a better understanding of competing devices. What better device to help develop such an understanding than what is arguably the iPhone’s biggest competitor, the Galaxy S5?

Since I’ve acquired one, I’ve mostly been enjoying my time with the GS5. In fact, I’ve traveled to South Korea, home of Samsung, which has made my perspective about the whole competition even more well-rounded. With all of this in mind, I wanted to compile a list of some of the things that I enjoy about the Samsung Galaxy S5. These are five things that I believe that the GS5 does better than Apple’s flagship iPhone 5s. Afterwards, I’ll do a reverse comparison, and tell you what I think the iPhone does better. Want to see which items made the cut? Check inside for the details.

Wow. That’s the first thing that one who’s been relegated to a 4″ device will likely utter once they first go hands-on with the Galaxy S5. The screen; it’s gorgeous. 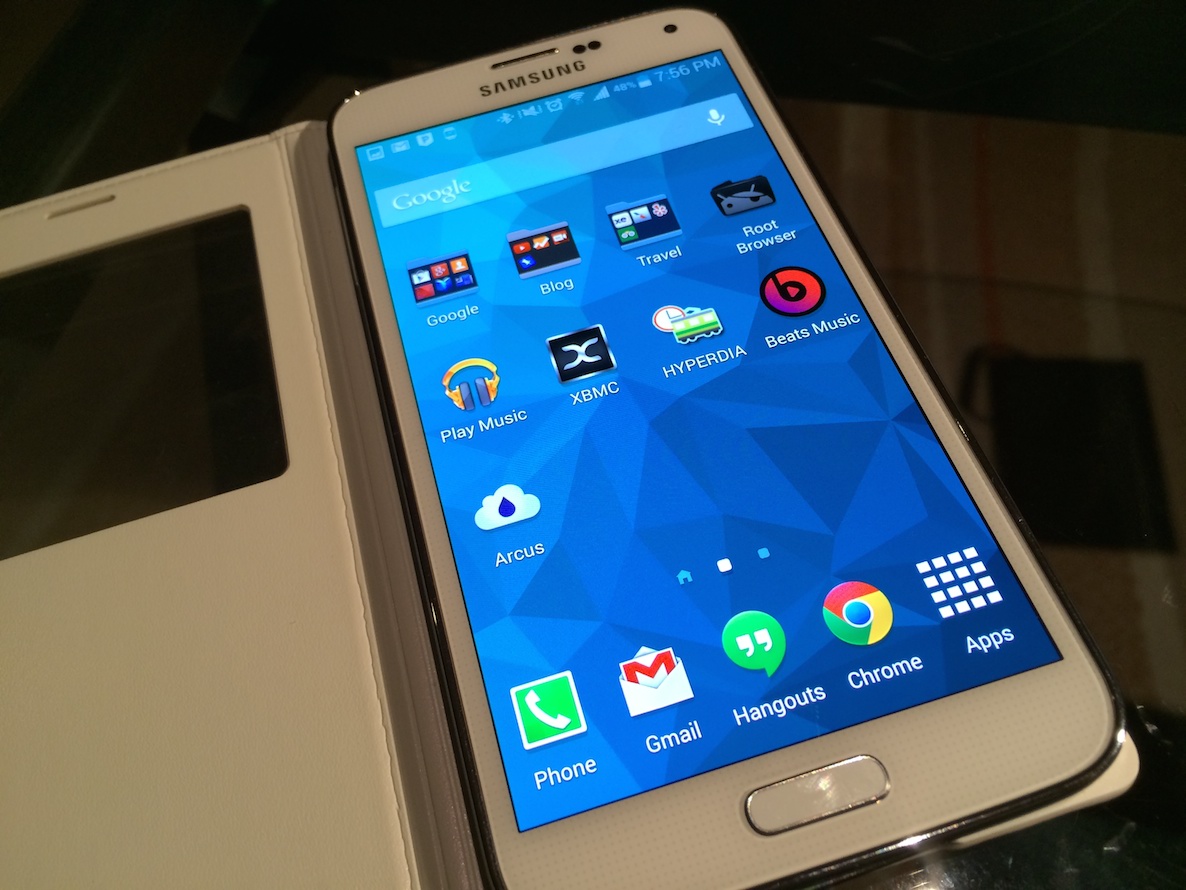 While it might not be a better screen from a technical perspective, and it may not have the color accuracy that the iPhone 5s possesses, in most cases things like that will play second fiddle to size and what I like to call “pop.”

The GS5 is like those TV’s you see in Best Buy. Those demo TV units have contrast settings cranked all the way up so that the picture stands out. They aren’t very accurate, but they draw a lot of attention and look good in passing.

Having such a big, bright screen is great for browsing the web, playing games, and virtually everything else. The black levels are also insanely good, so playing around with the GS5 in the dark is a nice experience.

All of that said, you’ll probably run into problems when it comes to photo editing, or anything that requires accurate color and contrast. I also find that the screen is extremely hard to see in any kind of direct sunlight.

I’m not a huge fan of the location of the speaker on the Galaxy S5, and I know it’s not the cream of the crop for sound as far as Android devices go, but the speaker is very loud. 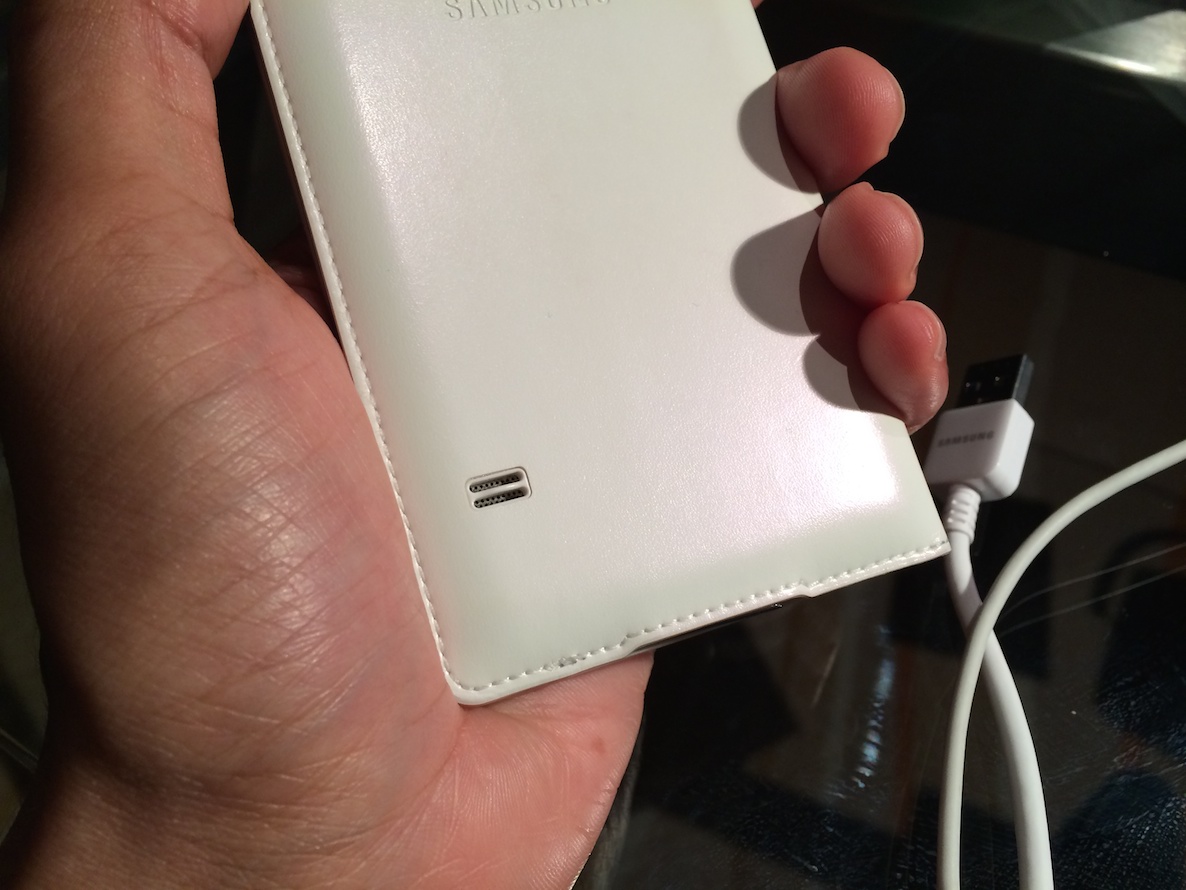 It’s so loud that it can easily entertain a small outdoor party on the patio with no need for one of those little bluetooth speakers. When compared to the iPhone’s tiny speaker, it sounds downright loud.

I have my complaints about Samsung’s S-View cover, but I like the direction that phones are going in this regard. I like having a case that provides additional functionality outside of just being a case. 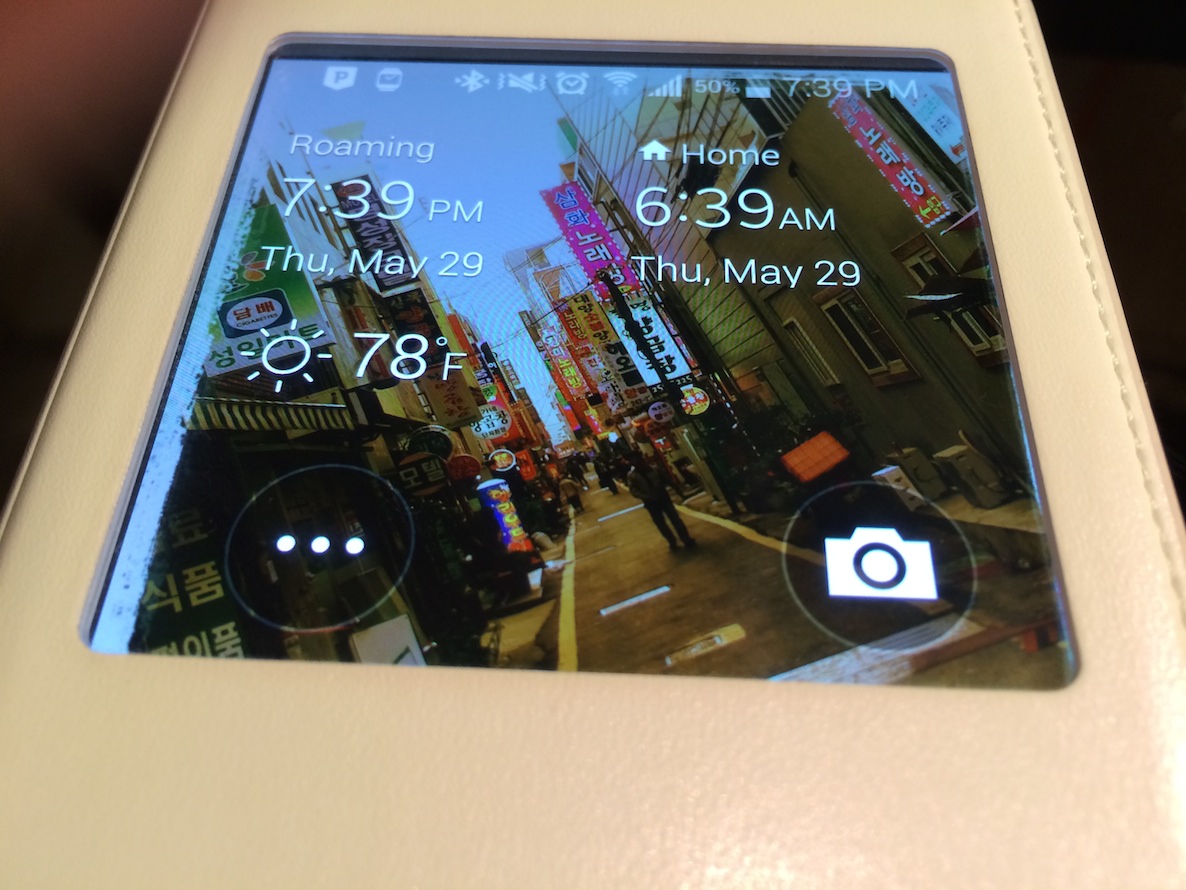 The S-View cover is a limited, but pretty awesome accessory

The S-View cover allows you to see a portion of the Galaxy S5’s screen and interact with it in limited ways. For example, you can control music, view album art, weather, the time, step counters, and more, directly from the little window on the S-View case. This means that you can handle all of these tasks while keeping the case closed. In theory, this should save battery life, because the entire screen doesn’t have to be powered.

You’ve probably noticed that some of our more recent videos have been shot in 4k resolution. This is because I’ve been shooting them with the Galaxy S5, which has 4k video shooting ability.

4k resolution—or Ultra HD as it is widely referred to as—is 4 times HD resolution, which makes the picture look extra crispy and clean. Even if you’re not viewing the video on a so-called Ultra HD monitor, you will still benefit from the extra lines of resolution when watching. Check out the video below to see what I mean.

After typing with the Google Keyboard on the Galaxy S5, typing on the iPhone 5s seems a bit broken to me. In my opinion, using swiping gestures on a touch screen keyboard is the definite future of typing on devices with this form factor.

Why are we still trying to emulate the key-depressing typing features of physical keyboards? It makes no sense. The iPhone needs the ability to switch keyboards, or at the very least, Apple needs to build its own swipe-able keyboard.

The good news for iPhone users is that most of the items on this list are fixable/doable. Apple will be dropping a larger iPhone this year, and perhaps its acquisition of Beats will place more emphasis on the actual sound output of upcoming devices. The S-View cover could essentially be overlapped by an upcoming iWatch, and one would have to assume that we will get 4k videos along with the rumored bump in screen resolution. Here’s hoping that Apple will step up to the plate and offer us some different keyboard options as well.

…But, of course, there’s lot of things that the iPhone 5s still does better than the Galaxy S5. Regardless of the specs that Samsung likes to inundate the public with, numbers only mean so much when it comes to real world usage.

The iPhone 5s has taken a back burner position in my life over the last month as I’ve been trying to get more familiar with Samsung’s offering and Android in general. But there are many times when I’ve been playing with the Galaxy S5 and I’ve thought to myself, you know what? I really miss my iPhone. With that in mind, here are five things that I appreciate even more about the iPhone 5s now, since I’ve been using the Galaxy S5… 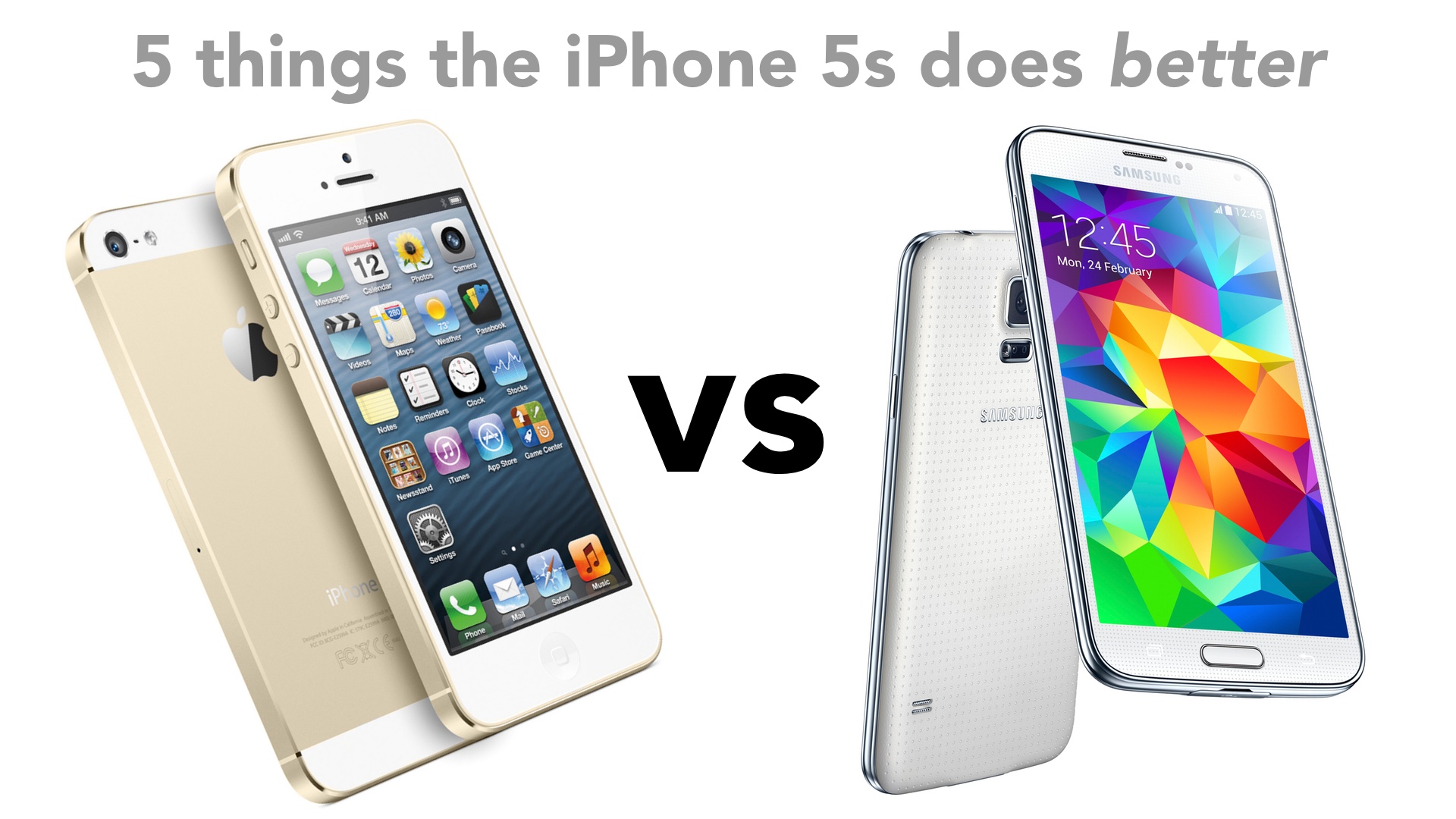 The camera on the Galaxy S5 isn’t horrendous, but it’s noticeable inferior to the iPhone 5s’ camera, and that isn’t even debatable in my opinion. Regardless of the megapixel count, or any other silly numbers that Samsung likes to toss around, none of that matters when it comes to actually snapping photos.

The low-light shooting ability alone makes the iPhone 5s a superior product when it comes to taking photos, and that’s just the tip of the iceberg.

You can use the iPhone 5s comfortably for almost everything with one hand. 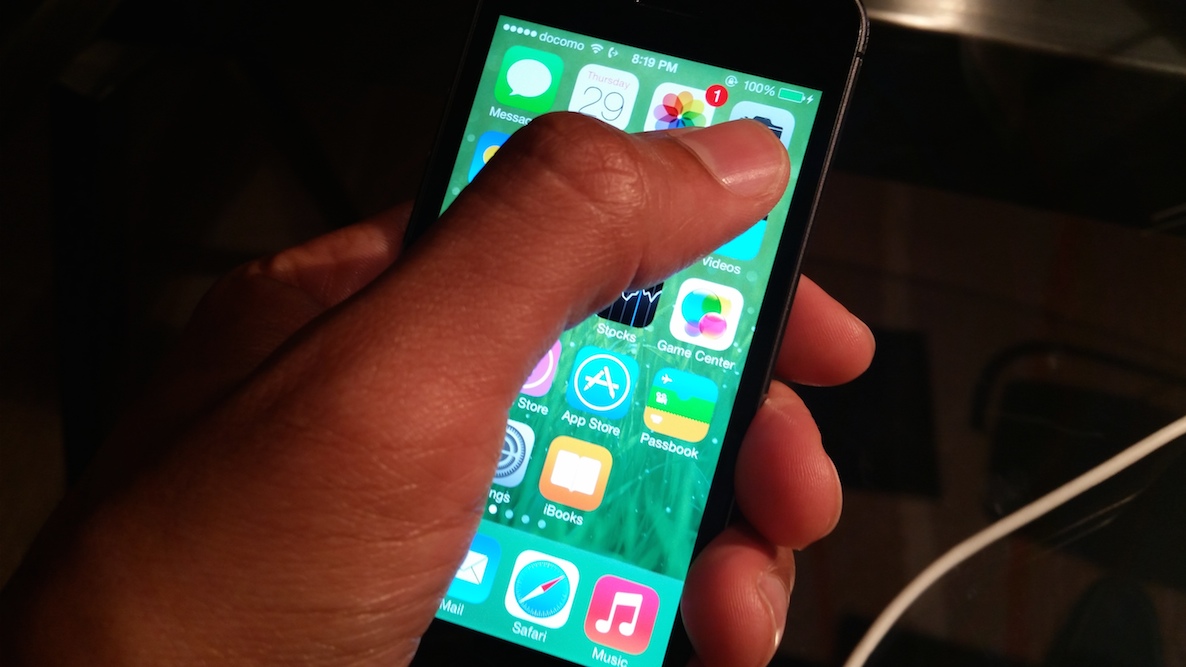 The Galaxy S5 isn’t the biggest of the biggest phones, but its’ pretty large, especially when side-by-side with the comparatively diminutive iPhone 5s. For that reason, I find myself having to massage the device with one hand in order to reach certain UI elements. Doing so causes hand-cramps, and makes the device more susceptible to dropping. I like the big screen, but I’m having a heck of a time trying to adjust to the form factor.

To me, this is where the GS5 fails the most. My time using it in Japan has been incredibly frustrating. Sometimes the screen will just go dark and won’t power on as if it’s completely dead. Sometimes the phone will act as if the S-View cover is still closed, and won’t let me to the Home screen. Sometimes it just lags really bad. This is very frustrating when you’re trying to use Google Maps to navigate through an unfamiliar city. I’ve wanted to toss the GS5 in the garbage on several occasions due to my frustration. 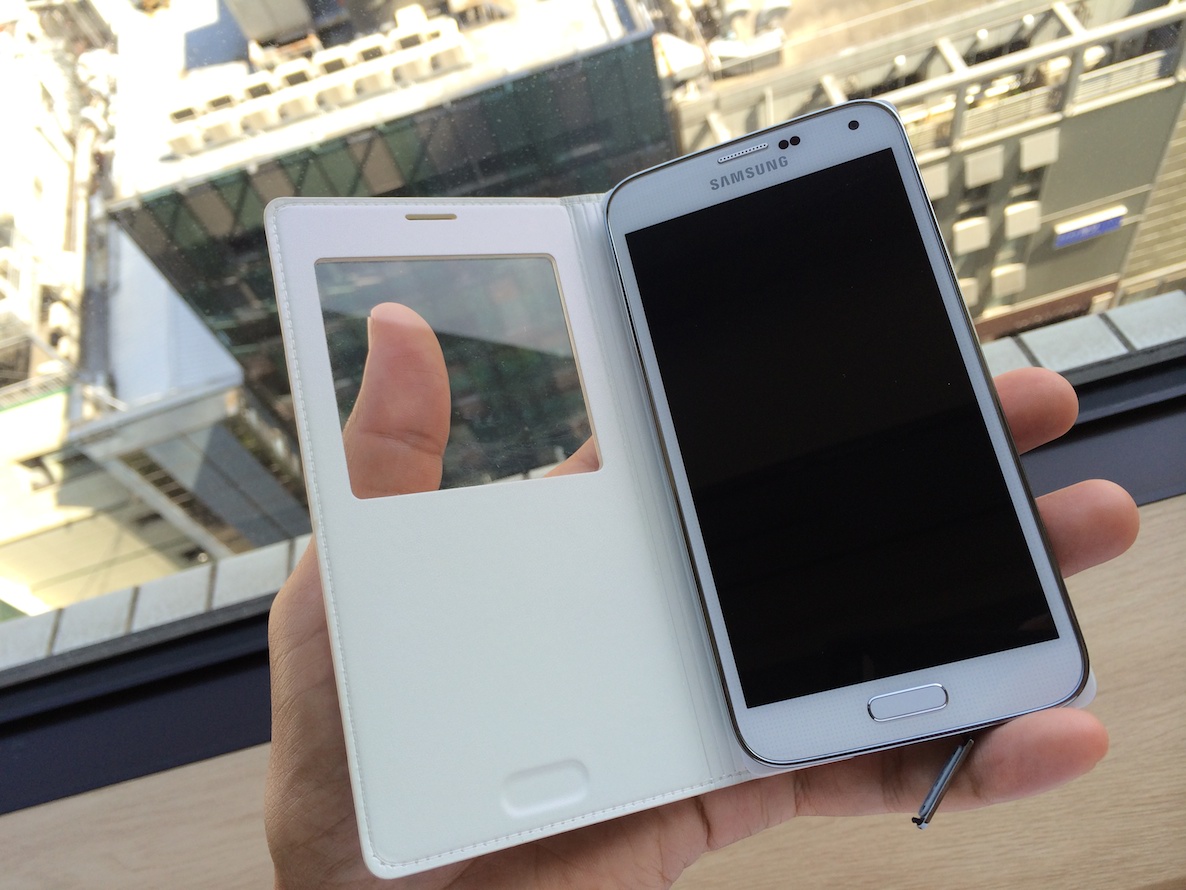 Despite its powerful processor and despite the amount of memory that the Galaxy S5 has, it’s still noticeably slower and sluggish when pit head to head against the iPhone 5s. Most of the blame can probably be placed on Samsung’s bloatware, but whatever the case may be, I encounter bugs, crashing, and overall sluggishness way more than I do on the iPhone 5s, and it’s not even close.

A phone with as much power as the Samsung Galaxy S5 shouldn’t be this slow and sluggish when doing normal day-to-day operations. The iPhone wins going away when it comes to its buttery smooth operating system and touch screen input.

The iPhone and iOS in general are known for being easy to use. A grandmother could pick one up and get the hang of it only after a few minutes. The Samsung Galaxy S5, on the other hand, is loaded, and I mean loaded with settings, apps, and various other features. 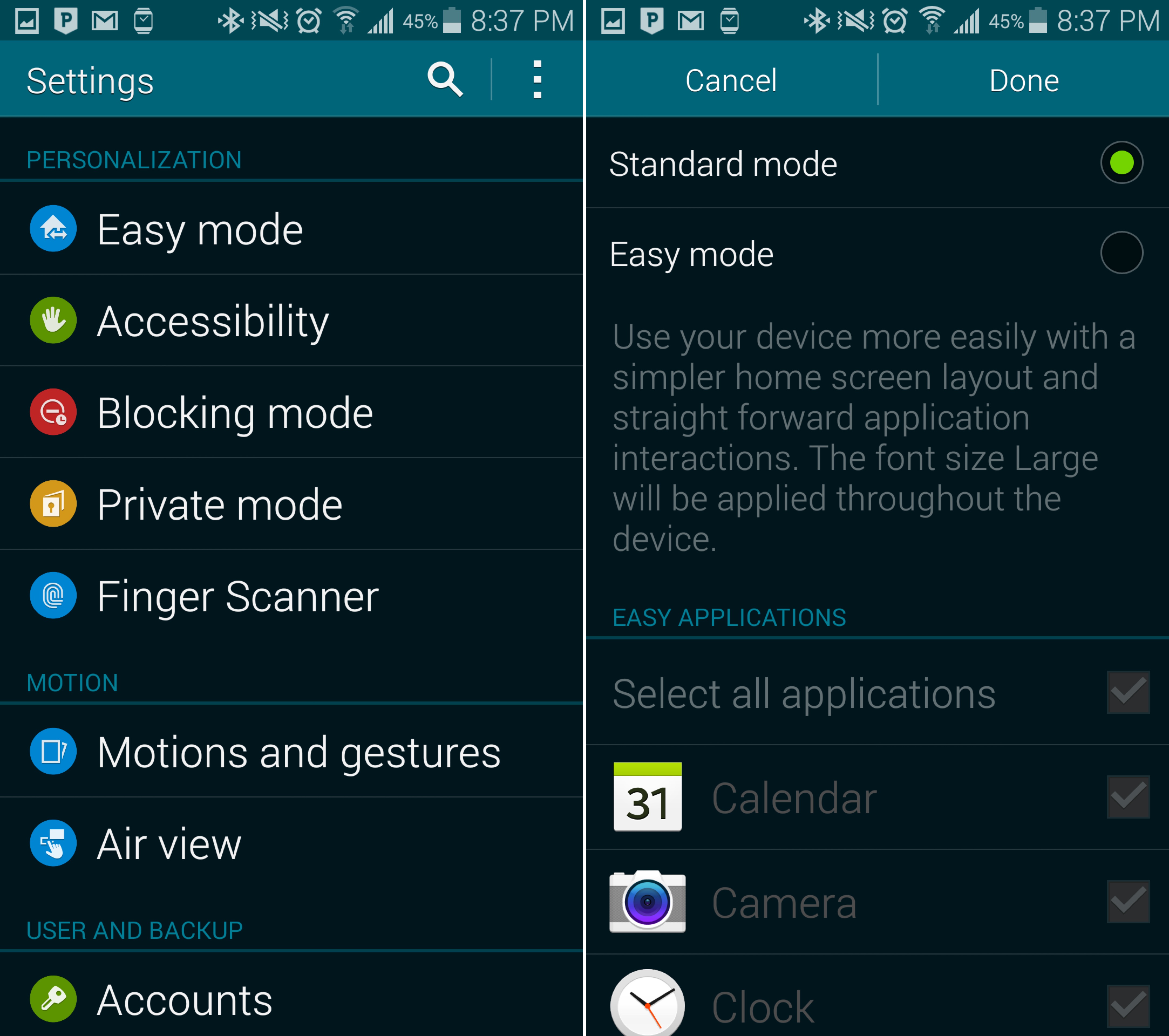 If you like to tinker around with stuff and explore, the GS5 will keep you busy for a long time. But the amount of settings can be a definite downside as well, especially if the interface is laid out in a confusing way. A newcomer would have a much harder time adjusting to the settings and the learning curve on the GS5 when compared to Apple’s flagship, and I don’t think anyone would even consider arguing with me about that.

The iPhone 5s, while not incredible when it comes to battery life, is fairly decent, even while jailbroken. I can use it for a full day on a single charge with all settings enabled and not really have to worry about it. The iPhone is also insanely fast when it comes to charging. 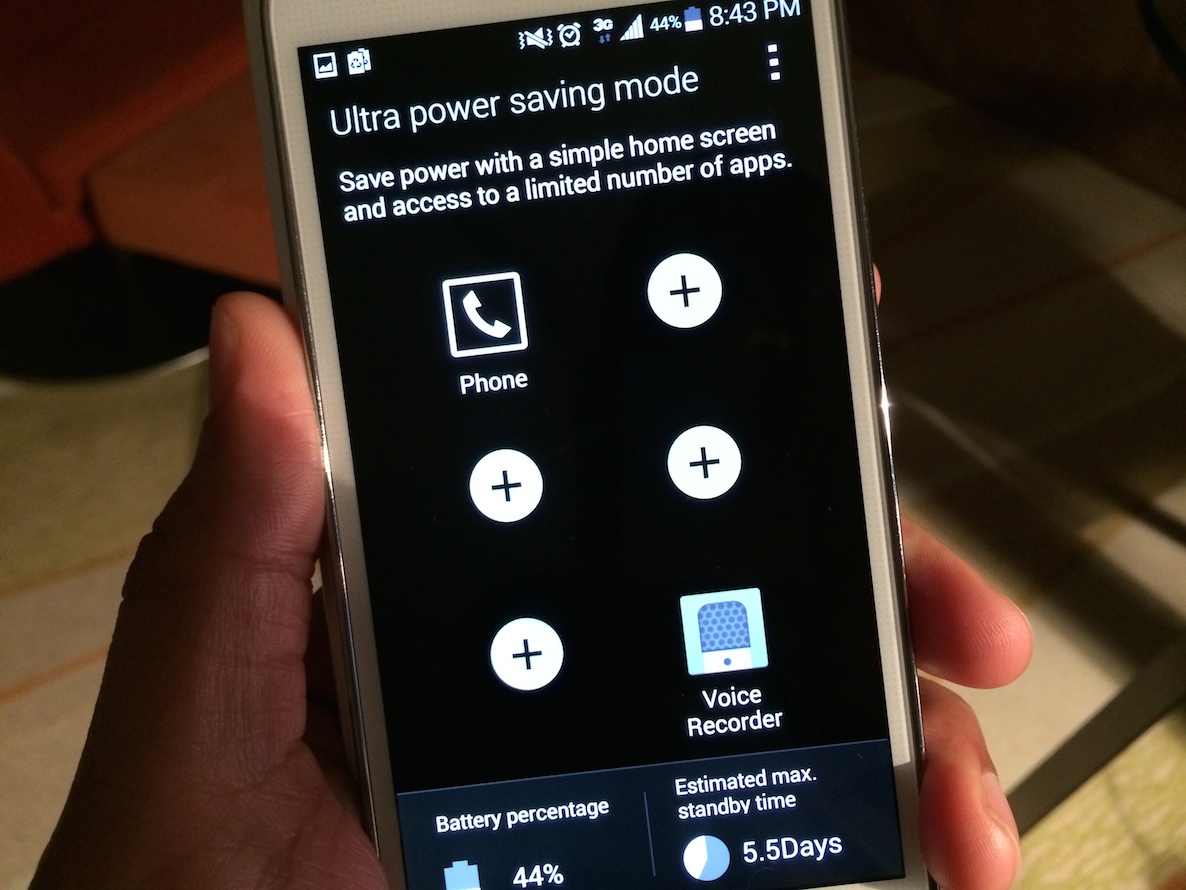 On the flip side, the Galaxy S5  can get me through an entire day only if I start micromanaging the enabled settings, and sometimes I’ve had to result to a power-saving mode just to make it through half a day, let alone a full day.

If you’ve been listening to me rant on our podcast, then you already know that I’m a pretty big fan of both the iPhone 5s and the Galaxy S5. The GS5 has been my go-to device for the last month, and I really enjoy using it, despite its shortcomings.

Five generations in, and I believe that Samsung has made up a lot of ground, but it still has a long way to go. The iPhone is such an insanely polished product, and all of its parts are just as strong individually as they are collectively.

If your main concern is about polish, ease of use, battery life, and taking photos, then there’s no question about it, the iPhone should be at the top of your list.

What do you think about the five points that I selected for each phone? Of course, I could have continued and selected other facets from both devices that I liked or disliked, but for the sake of time, I decided to keep it limited to five. What do you think? Is there something I forgot that you believe I should have included? Sound off down below in the comments, and stay tuned for our next episode of Let’s Talk iOS where I discuss this post with Sebastien and Cody.