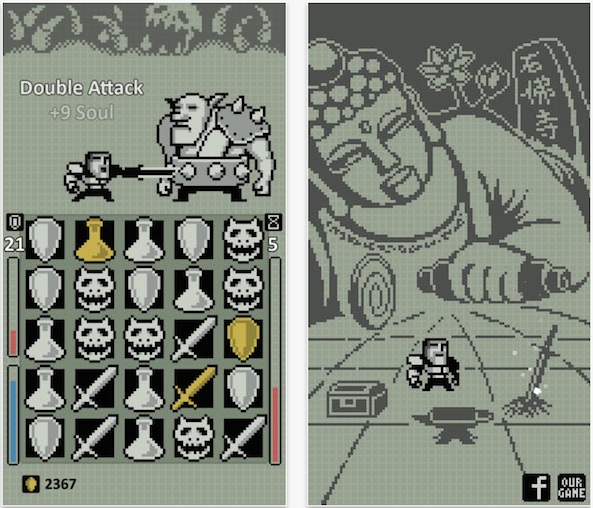 The team at Game Stew Studios is best known for their charming retro role-playing game (RPG) Tower of Fortune. In that mix between adventure and chance, players would battle against the forces of evil to try to reach the top of the terrifying tower. The sequel proved to be just as adorable and twice as hard.

Devil Shard is the most recent release from the mash-up loving team. This time, instead of mixing RPG with slot machines, players fight enemies using a match-three mechanic. Talk about identity crisis…

Players set out on an epic adventure filled with demons, undead, and a variety of monsters that are trying to take over the living world. Instead of exploring expansive lands to hack and slash your way to victory, you’ll be performing your feats of battle strength using a match-three system. 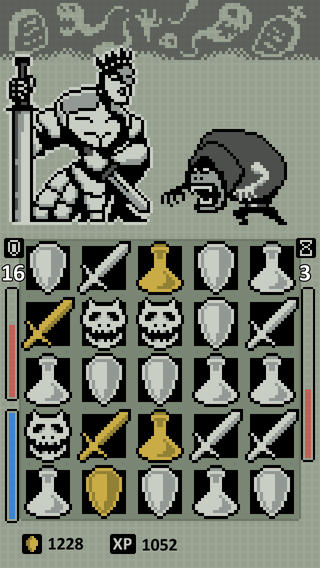 Players swap tiles to match up rows or columns of symbols. When a match is made, the attack is triggered. Players must defeat every living (or undead) creature in the dungeon to move on.

Like traditional roguelike games, this one is hard to beat and features perma-death, which means when you die, you lose everything you’ve looted or bought so far. Of course, you can’t go into battle without being well protected. So, you’ll have to purchase some potions and upgrade your armor if you want to survive. Don’t forget, if you die, you lose it all. 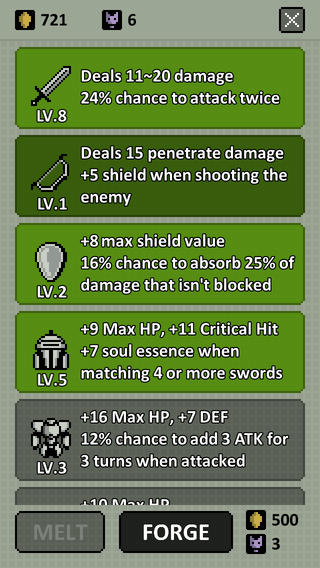 Players load up on stats increases and special items before picking a warrior to join them in their quest. Binding a warrior will give the hero extra abilities when in battle. Then, pick the dungeon you want to enter (levels must be unlocked, but can be replayed at anytime afterward).

Once inside, the fighting begins. At the top of the screen, your hero and the enemy will be face to face. Below, a grid of 20 tiles appears. Tap one tile to select it. Then, tap the tile you wish to swap it with. If a match is made, the attack will automatically take place. You don’t have to make a match to swap tiles. You can plan your moves ahead of time in order to trigger a massive attack that will cut the enemy to pieces.

There are 37 different enemies to face with eight dungeons that get progressively harder. Equip your hero with 32 different upgradable items. Select from nine warriors to bind to your hero. But, don’t think that will save you from dying, because it won’t.

This game is available on the iPhone, iPad, and iPod touch for $1.99. Download it in the App Store today.

Are you a fan of Game Stew games? Are you planning on downloading Devil Shard?