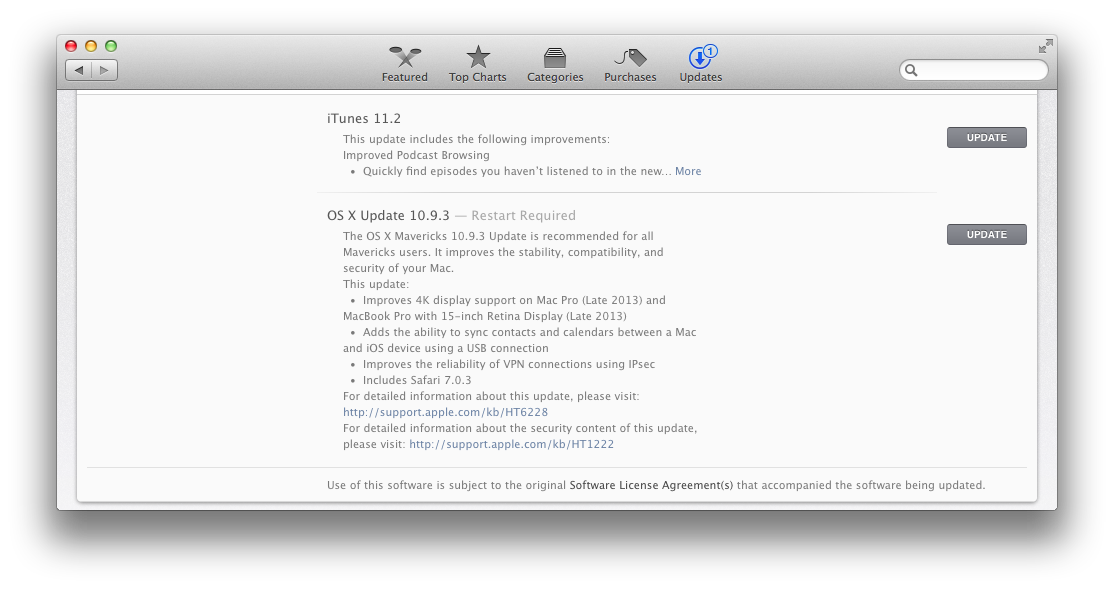 It expectedly includes proper support for external 4K displays that makes everything crisper rathern than smaller. Other changes include more reliable contact and calendar syncing, the previously released Safari 7.0.3 and more…

Apple recommends that all Mavericks users apply the OS X 10.9.3 Software Update because it improves the stability, compatibility and security of your Mac.

With this update applied, owners of the late-2013 Mac Pro or late-2013 MacBook Pro with 15-inch Retina display can finally hook up their computer to an external 4K monitor and enjoy refresh rates of 60Hz.

More importantly, OS X 10.9.3 will use the pixel-doubling technique to enable a true Retina experience where the size of windows, icons, apps and other user interface elements remains unchanged while making everything sharper due to a greater pixel count.

You can apply the update by choosing Software Update… from the Finder’s Mac menu.

A restart is required.

If you’re going to be updating multiple Macs, save yourself time by grabbing either a standalone or combo installer. Then, copy it to a thumb drive and use it to update all your Macs without re-downloading the update on each machine.

The standalone OS X Mavericks installer listed in the Mac App Store remains stuck at version 10.9.2, but should soon be updated to include 10.9.3.

Let us know down in the comments about other changes not mentioned here, if any.