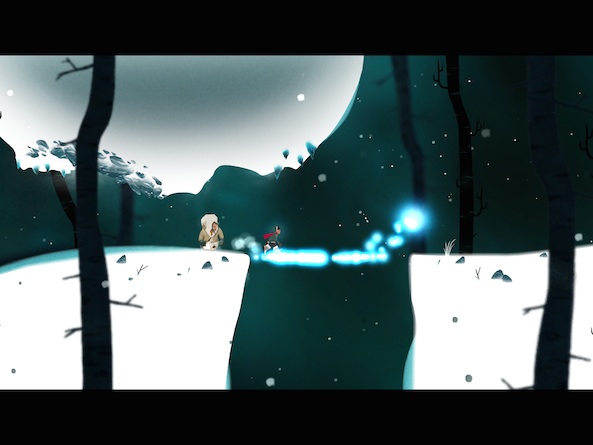 A few weeks ago, we reviewed Leo’s Fortune and found it to be one of the best platform games to ever come out on iOS. It is proof that mobile gaming really can be impressive

Last Inua – An Arctic Adventure is another impressive platform game that looks great and offers an interesting level of challenging puzzles. We spent some time with the platformer and have a Last Inua review for you below…

The graphics are stylistic and artistic with sharp angles and bright colors, contrasted against a dark, moody backdrop. The game’s protagonists, Hiko and his father Ataataq, look like they could live on the cover of a comic book. The characters are running for their lives because an ancient demon needs Hiko in order to destroy the world. However, he is just a boy and needs his father’s protection and guidance.

Players embark on a journey that takes both father and son across treacherous terrain to escape the perils that populate the landscape. Switch between Ataataq, who can break boulders and climb cliffs, and Hiko, who can float like a feather and create light bridges to cross wide gaps. The question is, which Inuit is right for the path ahead. Only experience will show the way. 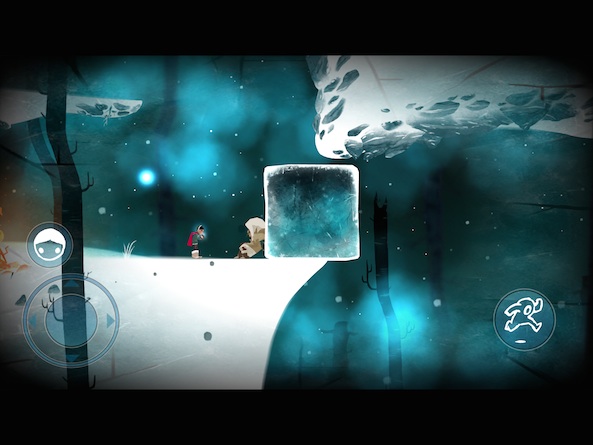 Players must travel across a complex side-scrolling landscape by controlling two characters, each with different abilities. There are spiky pits, dangerous cliffs, and destructive creatures everywhere. Use Hiko and his father to navigate across the terrain to get to the end.

Both characters move using a virtual joystick. Ataataq can also jump and punch. The jump button is always on the right side of the screen, but switches to punch when he gets close to something he can use force against. Hiko’s only control is joystick movement unless a feather portal is nearby. When he can use it, a feather button will appear on the right side of the screen.

No matter whom you are controlling, the second character will follow along whenever he is able to. For example, both father and son will slide down a hill together, but if Hiko can’t get past a boulder he will remain stationary while you take the lead with Ataataq to find a way around it.

Ataataq is strong and fearless. He can jump, climb, and smash boulders to bits. Use him to break down obstacles, push blocks out of the way, and clear a safe path for Hiko. Ataataq can also climb up the sides of steep cliffs using his trusty ice picks. When there is no way for Hiko to get from one place to another, it is oftentimes Ataataq who climbs to great heights in order to get to the other side and unblock the path for his son.

While Ataataq uses brute strength to overcome obstacles, Hiko is very weak. He can’t even jump. Although, he can climb up small inclines as long as they are low enough for him to reach up to. Hiko may not be strong, but he has the ability to call on light to help him out of difficult situations. In certain places, Hiko gets help from a blue fairy-like orb that creates a light bridge. Players touch the orb and drag it across the area to create the bridge. The orb will drop sparks across the air and Hiko will automatically walk across it.

Sometimes, Hiko can float through the air using feather portals. The portal looks like a burning globe. When he gets close, a feather button will appear. Tap the button to send Hiko through the portal. Most of the time, there will be a series of feather portals that Hiko continues to jump through until he gets to the end.

The levels are made up of a series of obstacles that players must figure out how to get around. Sometimes, Hiko is the best man for the job thanks to his light bridge and feather portals. Other times, Ataataq can barrel through the barrier with his super strong punch to clear the way to safety. Most of the time, you won’t know until you’ve failed, whether father or son is best for the situation. 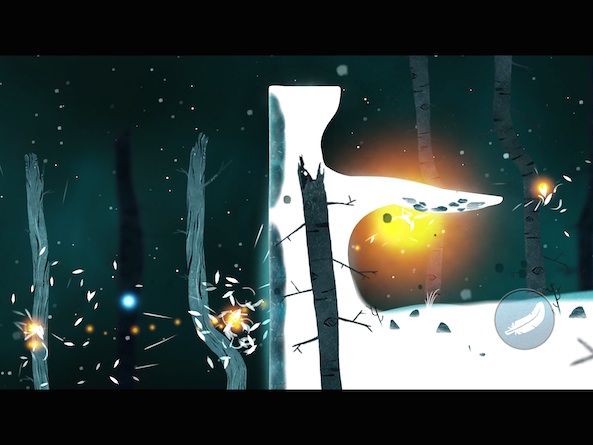 I love the mood that this game evokes. The characters are animated and lifelike. Sometimes, if Hiko is too far from Ataataq, father will call out to his son anxiously. When Hiko is waiting for his father to clear a pathway, he can be seen rubbing his hands together to try to stay warm.

The puzzles are interesting, and don’t really even feel like puzzles at all. The world seems like it naturally developed cliffs, boulders, and spiked pits that you must to figure out how to get around.

The story is interesting. It plays on mythological legends of the far north. You’ll see yetis, ice wolves, demons, and other creatures that add to the atmosphere.

Oh, how frustrating. There is a very annoying glitch that freezes the controls. It happened to me at least four times. I tested the game on my iPad Air. When it happened, I had to close the game in multitasking and reopen it. Luckily the game resumes from your last save point, so you don’t lose too much gameplay. On the App Store description, it is recommended that you restart your device after installing the game and that seems to have worked for me.

Last Inua costs $3.99 and there are no in-app purchases of any kind. The game’s quality and aesthetic could generate at least two dollars more than the asking price. Although it is very fun to play, the replay value is low since you can’t go back and play levels you’ve completed.

One part of me wants to recommend players wait until the control bug gets fixed. Another part of me wants to tell you to just go for it because the price is low enough to make it worth the hassle. Restarting your device takes about 30 seconds at the most, so the minor inconvenience is worth the price. If you like adventure platformers, this is another great addition to the mobile game market. This game is available on the iPhone, iPad, and iPod touch. Download it in the App Store today.

Leo’s Fortune is another excellent platform game with good graphics and a well-made design.