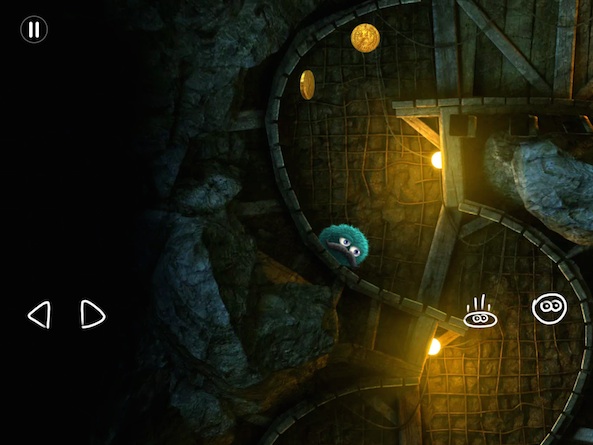 Ah, the platformer, a genre that has stood the test of time for generations. Once Mario and his brother graced our living room screens, we were hooked on the run-and-jump adventure that platformers offer. After so many decades, it is starting to get hard to tell titles apart. It seems like anyone can make a platform game, but not everyone can make it good.

Leo’s Fortune is a platform game that is visually attractive, mechanically exciting, and filled with complex puzzles that keep you coming back for more…

One great aspect of the game is how good it looks. Players control the mustachioed Leo as he goes on an adventure to find his missing gold. You’ll travel deep into mines, across treacherous harbors, and desolate desert ruins, searching for the thief who stole Leo’s treasure.

Each level is meticulously detailed with attractive background landscapes. Leo travels along curving, swirling, side-scrolling pathways. Some pathways are filled with obstacles that Leo interacts with in order to progress. Swinging mines and spiky gears fill the land. Players must figure out the best way to get from one side to the other without getting crushed or poked.

The game features a perfectly suited soundtrack. Each world has a different theme, but all songs run seamlessly together. The sound effects, including Leo’s exclamations of success, add to the overall depth of the game.

There are five acts, which include five different lands. Each act is based on one of Leo’s relatives, whom he suspects is the dastardly thief who stole his fortune.

In addition to a well-made game, there is a story to follow, a story with intrigue, betrayal, and misunderstandings. Leo must find out who stole his gold, but traveling to visit those he suspects of the crime turns up nothing. Will he ever find his gold? Will he ever find the thief? 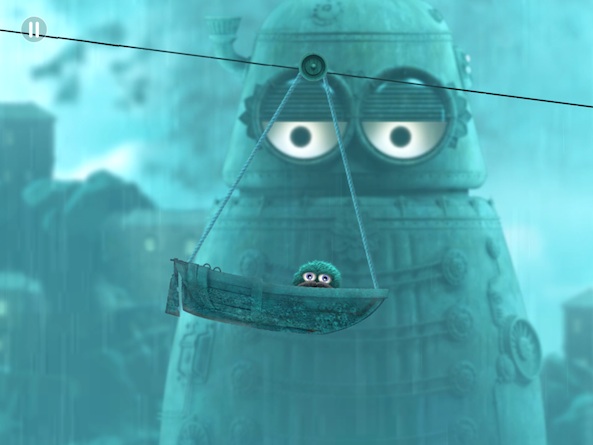 Seeing this is a platform game that does include MFi controller support, the first thing I did was connect my SteelSeries Stratus to my iPad. I played 10 levels of the game before deciding that it was my duty to test the game with its touch screen controls as well. This game is perfect for Apple supported controllers. However, the on-screen controls worked just fine.

Players start off learning how to control Leo. Move him forward and back using the left side of the screen. Place your thumb anywhere to activate the controls.  On the right side of the screen, use an upward swiping motion to “puff” Leo up, which makes him jump and float. Use a downward swiping motion to make him squash down, which is useful for triggering bouncing boards and sinking to the bottom of the harbor.

If the general touch screen controls don’t work for you, you can switch to traditional button controls by pausing the game and opening the settings section. I found the swiping motion to be a bit awkward on the iPad and switched to button controls. Both work seamlessly.

After the very short tutorial, you’ll be set on your way. Leo races down slopes, jumps over cliffs, and puffs up to float across wide gaps and spiky pits. There are dozens of little obstacles that Leo must work out in order to move on. Each level features increasingly difficult situations that require your puzzle-solving skills.

For example, at the beginning of the game, players must puff Leo up to activate a lever that drops a bridge so he can cross a wide gap. By Act 2, you’ll be dealing with traps, blockades, and all manner of spiky obstacles that Leo must manipulate, move, and destroy. On one level, he’ll have to swim to the bottom of the harbor to collect boxes that have to first be dislodged. The boxes will then have to be pushed to a specific location to weigh down a platform that is connected to a gate. When the platform lowers, the gate rises and Leo can get through.

The whole game is peppered with those types of puzzles. Plus, you’ll be faced with tricky platforms that move and rotate, exposing sharp spikes that stop Leo in his tracks.

Scoring is based on whether you’ve collected every coin, how long it took to get through the level, and whether you made it all the way through without losing a single life. If you do die, you normally pick back up right around the same spot. Leo has unlimited lives, so you can try and fail over and over again without facing any consequences.

Each Act, except the last, has four main levels and one bonus level that require a certain number of stars to unlock. There are five acts in total. 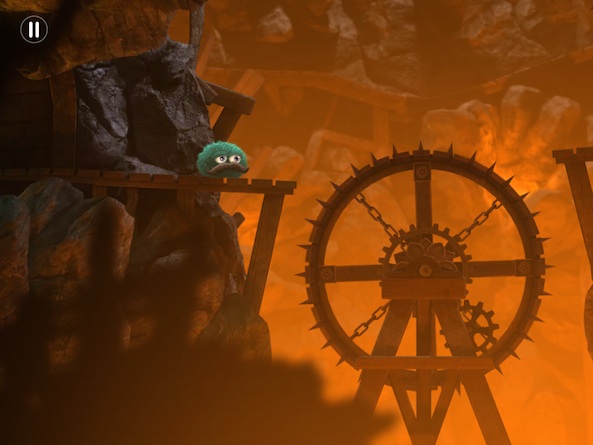 This is the best platform game I’ve played in quite a while. Not only does it look great, but also the puzzles, obstacles, and game mechanics are perfect. No detail was left out. Developers are finally catching on to what it takes to make a mobile game that works.

There are only 23 levels in total. It took me an average of 10 minutes to get through a level, which means the game will only last about four hours, total. You could potentially beat this game in one evening and still have time to watch Game of Thrones. I want more.

Leo’s Fortune costs $4.99. This game is definitely worth every cent. Even though, as I mentioned, it is somewhat short, it is definitely worth the price. I only wish there was more to play. I would gladly pay $4.99 over and over again for new acts. Hopefully, a sequel is already in the works. The replay value is relatively good considering it will be almost impossible for you to get three stars the first run through.

If you like platform games, there is no question that you should spend the money. It is a great buy. This is one of the best mobile platformers I’ve ever had the pleasure of playing and I look (hopefully) forward to a sequel. If you have an MFi game controller, you will love how well it works with Leo’s Fortune. This game is available on the iPhone, iPad, and iPod touch. Download it in the App Store today.

Sometimes you Die is an interesting take on the platform genre. Super Brothers is a funny homage to the father of all platform games, Super Mario Bros.