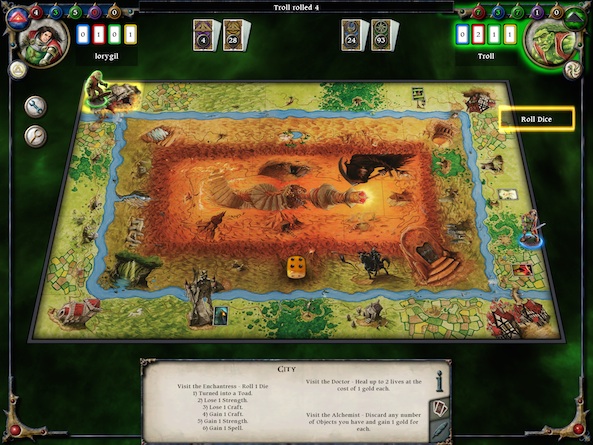 Talisman is a fantasy board game that first came out in 1983. Fans of role-playing titles were keen on this adventure because it mixes traditional adventuring with a bit of character stats building. The game has been revised three times and has about a half dozen expansions under its name.

Talisman: Digital Edition is the only official licensed version of the decades old game and uses the revised fourth-edition rulebook. Now you can role the dice to see where you will journey while playing alone, or against up to three additional players on Game Center. Check out our Talisman review after the break…

The board looks nearly identical to the physical one, only the defining separation lines are missing. The board looks more like an expansive landscape than a game. Players’ game pieces stand out as highlighted 3-D characters. Animations include such things as dice rolls, game piece movement, and card viewing. However, there are no mini battles with animated goblins or anything like that. The best you will get is a slashing effect across a card when you fight an enemy.

Each players’ profile is listed in one of the four corners of the screen. You can view yours and your opponents’ profile at any time by tapping their avatar. You’ll see detailed information on their stats, including strength, craft, lives, fate, and gold.

You can also see the spells, objects, followers, and trophies that each player has by tapping the objects tray right below your profile.

You can zoom in to the current character’s space by tapping the magnifying glass icon on the left side of the screen. Speed up or slow down the computer-generated opponents’ moves in the settings section, which is accessible from the left side of the screen. The game includes an epic soundtrack that keeps you in the mood for adventuring, but you can turn it down at any time in the settings section. 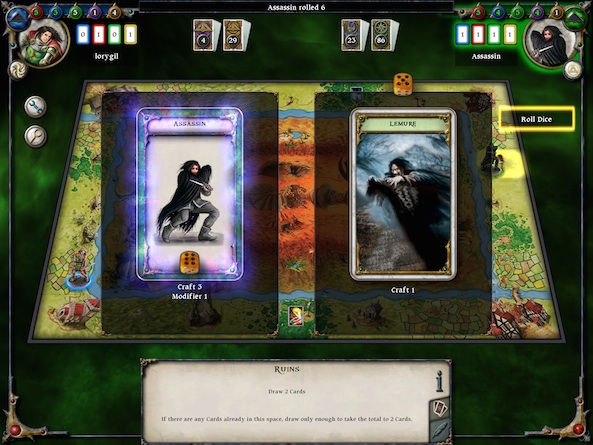 The goal of the game is to get to the Crown of Command at the center of the board and cast Command Spells that eventually kill off the rest of the players on the board. Getting to the Crown of Command is much harder than you think. The board is divided into four sections. In order to pass from one section to another, players must either play special ability cards, get teleported, roll a certain number, or fight a very powerful enemy. For example, players must fight the Sentinel in order to cross the bridge that separates the outer and first middle region. However, if he has the Raft card, he can use it to travel across the river without fighting the Sentinel.

Players start by picking which character they would like to play. There are 14 characters in the base game, each with a different ability. For example, the Assassin can use a special ability against enemies that keeps them from being able to roll the dice to add points to their attack. There are five additional characters that can be added for $0.99 each.

You can play online or off. If you choose to play online, you can be teamed up with up to three additional Game Center players. You can play against random opponents, or invite specific players to the game.

When the game begins, you will learn where everything is and how things work with the in-game tutorial, which appears whenever you do something for the first time. Tap the dice to start your turn. Each space on the board has a direction. Some spaces require you to draw an adventure card and resolve the encounter. Others require you to role the dice to see what your fate will be. For example, if you visit the Tavern, you must roll the dice to see if you 1) lose a turn, 2) fight an enemy, 3) lose one gold, etc. On spaces where you must roll a dice, there is a specific outcome for whatever number you roll.

Some spaces offer special rewards or penalties for the player’s alignment. Different characters start the game with an alignment of good, evil, or neutral. Some characters, like the Druid, can change alignment to fit the space they are on.

The game also comes with the ability to purchase the Reaper expansion for $4.99, which includes four additional characters, 90 adventure cards, 26 spell cards, and 12 Warlock quest cards. You can add a Gold Runestone pack to your game, which gives your character special abilities. The Runestone cards are unlocked through gameplay, but can also be purchase in the in-game store. 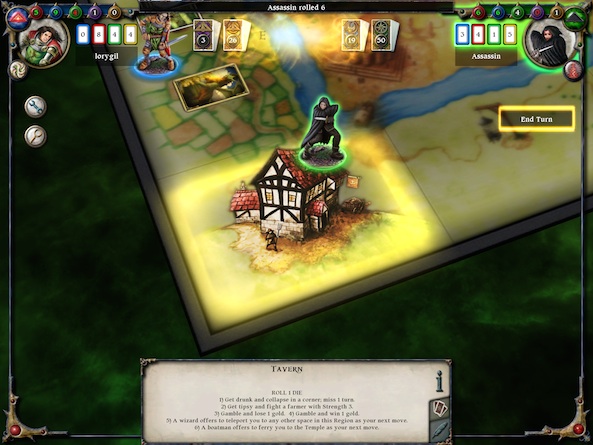 The game plays wonderfully. It is an excellent port of the physical game. The Artificial Intelligent opponents are not so good that they beat you every time. I was able to successfully pair up with a random Game Center opponent in under a minute of logging in to multiplayer mode.

You can’t leave an online game. If you do, it is considered a forfeit. This is good for playing an online game all the way through to the end, but bad if you want to play at your own pace.

Talisman costs $6.99, which is an average price for a board game app. Anyone who has played the original will love this digital version. The replay value is through the roof. No two games are alike and you can play alone against a computer opponent, or against real players on Game Center. Even the expansion pack is worth the extra five dollars to those who love the game.

This is a must-have game for fans of the original. It is a no brainer. Everything you love about Talisman is reproduced in digital form. If you are not a board game player, you may have a little trouble figuring out the rules and might consider this game to be a bit complex. If you are willing to try something new, there is a comprehensive help guide that is accessible from inside the app. This game is available exclusively on the iPad. Download it in the App Store today.

Warhammer Quest is another Games Workshop title based loosely on a popular board game. Chainsaw Warrior is a dice game originally created by the same company.

What do you think of Talisman? Tell us in the comments below.