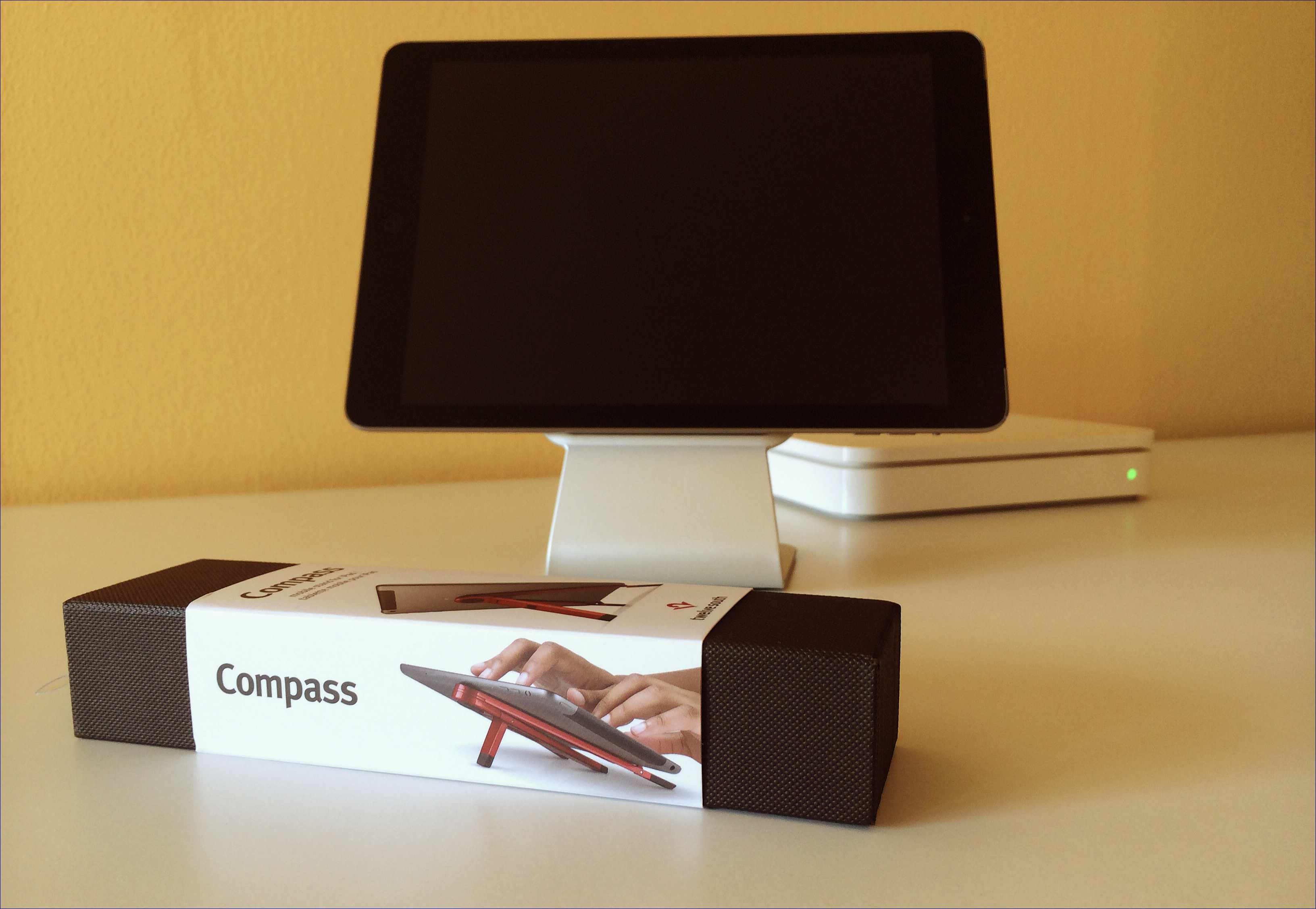 In my final preparations for moving to the seacoast this coming weekend, it’s dawned on me how my workflow will be a lot different, whether I like it or not.

For the next six months, I’ll be living and working in a myriad of places, spending most of my blogging time at the picturesque beaches at the beautiful Mediterranean city of Rovinj, situated on the north Adriatic Sea in Croatia.

Thanks to its all-day battery, a 13-inch 2013 MacBook Air will be the cornerstone of my mobile office, with a little help from my 128GB iPad Air doubling as a cellular hotspot and a second screen device for social media interactions.

I’m also adamant to have a flexible iPad stand wherever I go, one that would prop up my device for easier reading and at the same time provide the flexibility of prolonged typing at slightly slanted angles.

Desktop iPad stands such as the recently reviewed Slope by Dekke are out of the question – they’re bulky and too impractical for outdoor use. Luckily, there’s no shortage of mobile stands that are a joy to carry around.

The second-generation Compass for iPad by premium accessory maker Twelve South is a dream come true for all you road warriors out there who strive as much for portable nirvana solutions as yours truly.

After spending nearly a month with the Compass 2, I’m happy to report that it’s one of the best portable tablets stands around. It’s so compact it fits in your pocket (or a purse/handbag) and versatile enough to support slanted typing or prop up the device…

Before we dive into the Twelve South Compass 2 review, it must be noted that the accessory has been conceived as a portable multipurpose iPad stand which folds out in an instant to become a comfortable typing stand. Or, it can serve as a tripod-like easel holding your device in portrait or widescreen mode at about a 55-degree angle for comfortable hands-free use.

How’s this thing different from Compass 1?

Twelve South engineers have retooled the already amazing 2010 Compass with a tweaked design making it play nicely with any iPad model, including the current-generation iPad Air and iPad mini. It has a more FaceTime-friendly viewing angle and is wider so more stable, too. 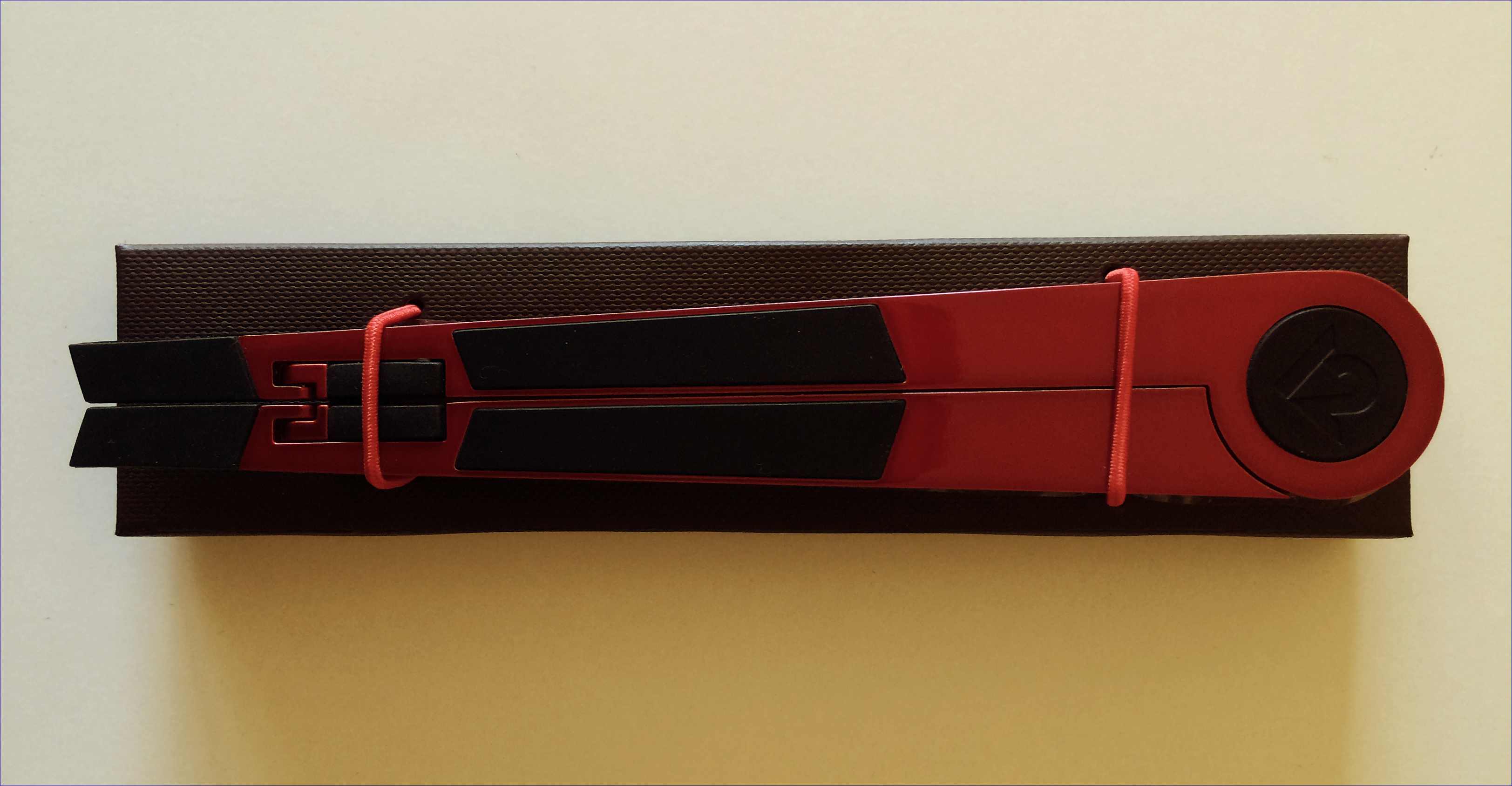 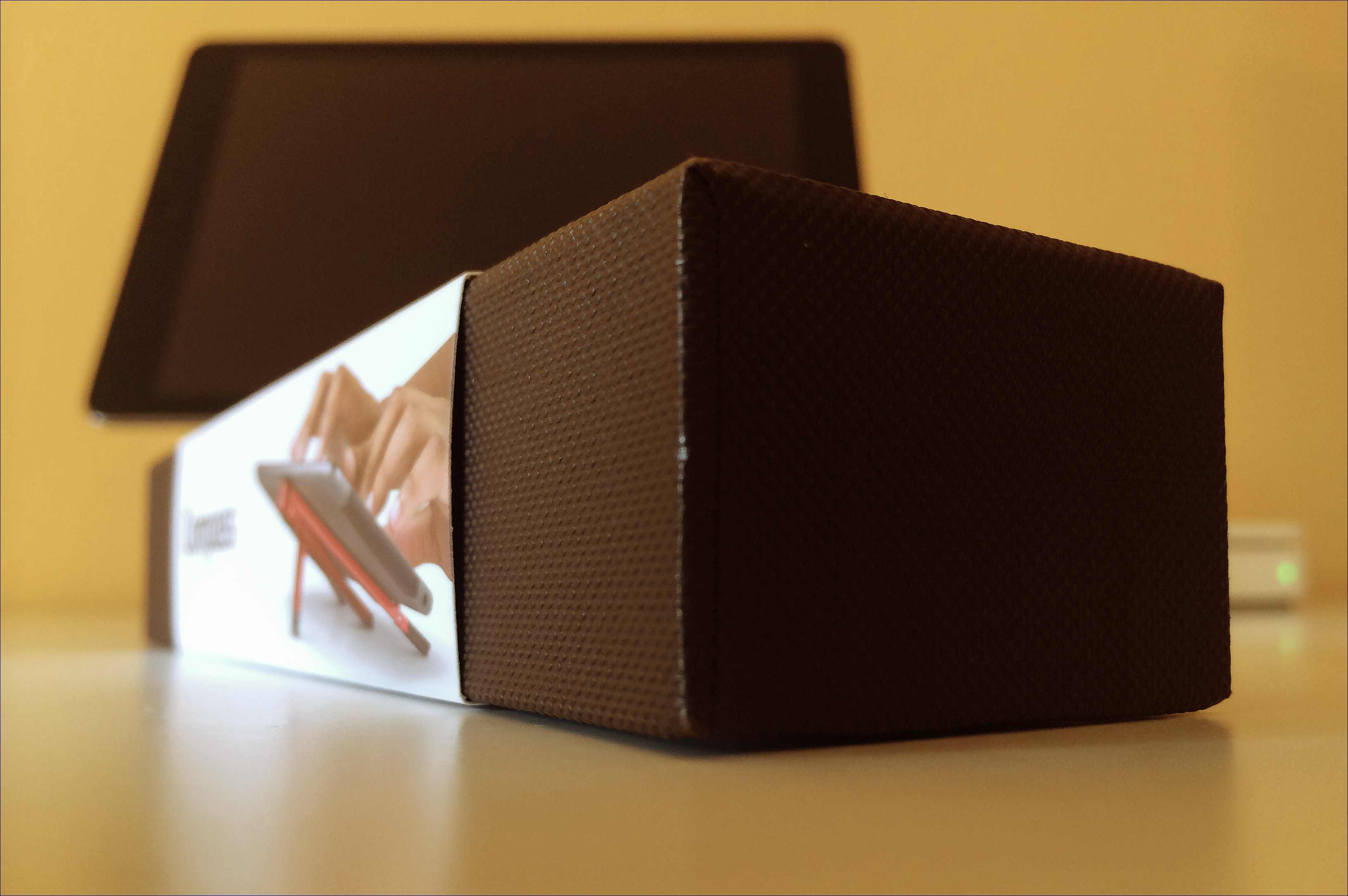 Another improvement: Compass 2 stands higher off the ground, providing about an inch of space for easy access to charging so you can hook up a Lightning cable underneath without worrying about breaking it.

Best product experiences start with packaging – just ask Apple, whose product boxes are as meticulously design as the gadgets inside them. 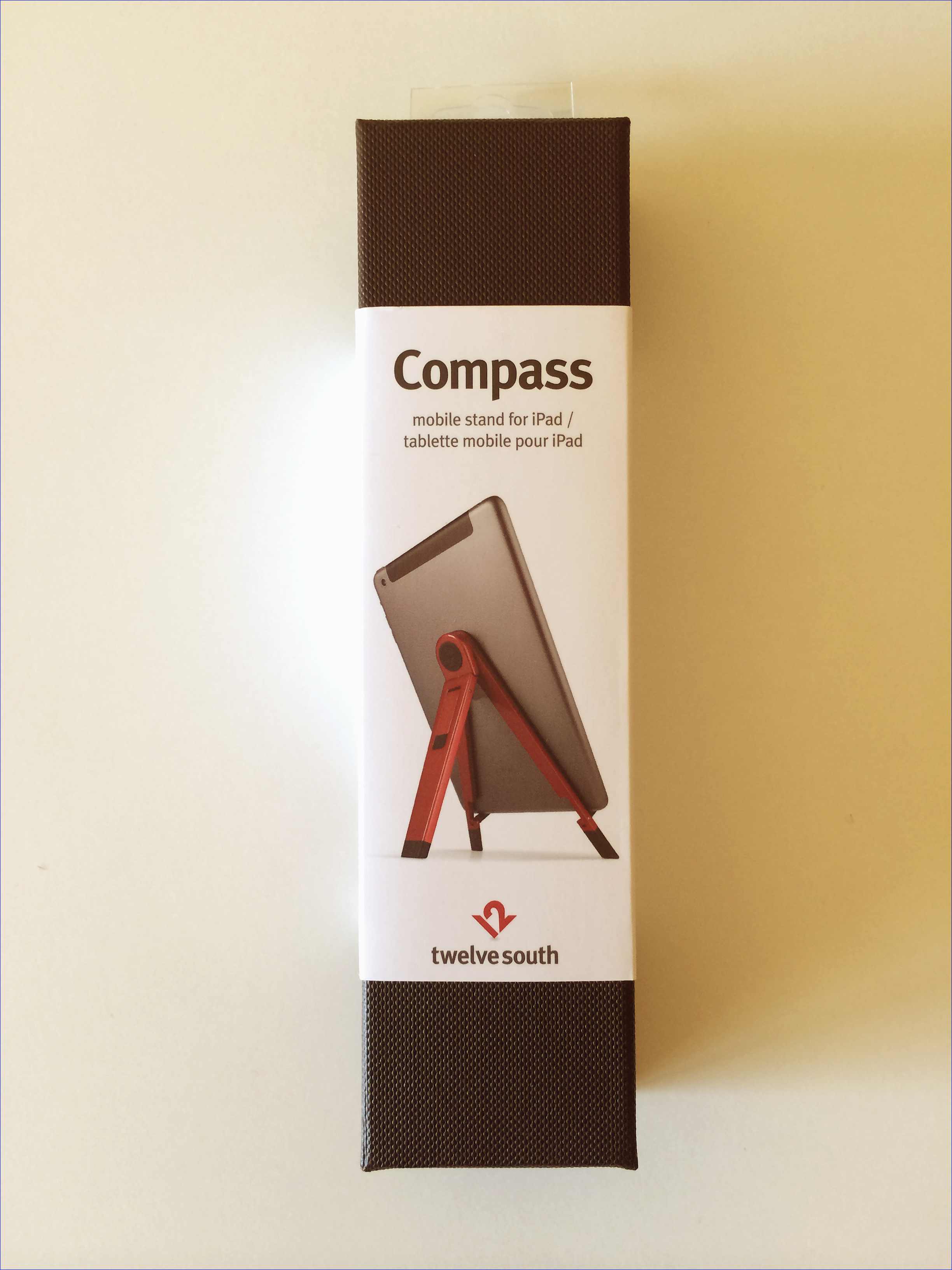 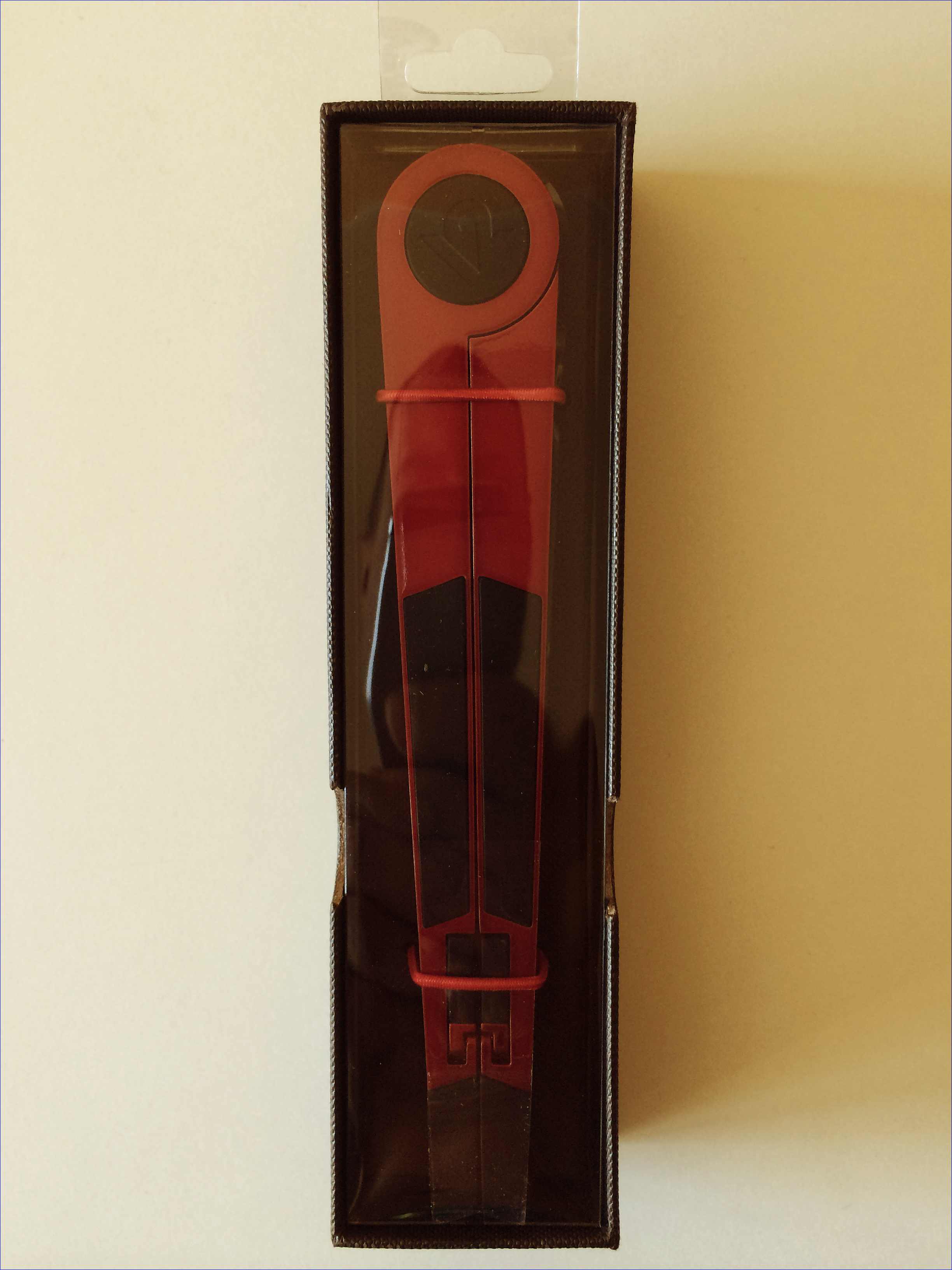 Twelve South’s design prowess are evident in the eye-catching tall and narrow box which could be easily mistaken for a premium Swiss chocolate or a pricey necklace were it not for the transparent top exposing parts of the product. 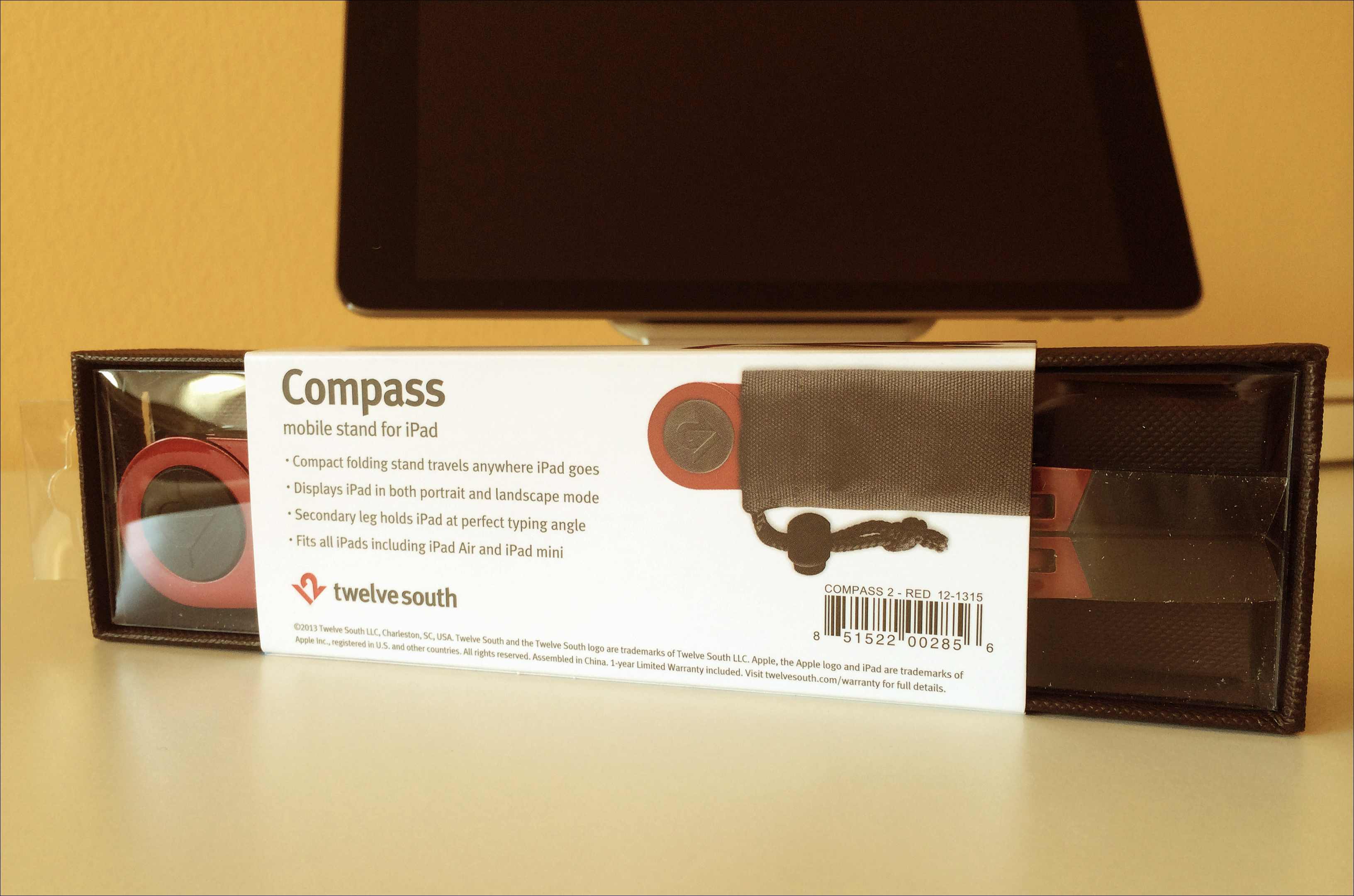 If only other people paid more attention to their boxes.

Twelve South has made a name for itself by designing accessories with great build quality and Compass 2 is no exception. The minute you hold it in your hand, you’ll become fully aware this is a thoughtfully designed accessory.

Forged from heavy gauge steel and with accented rubber segments serving as a form of device protection (more on that later), Compasss 2 is sturdy and doesn’t feel like it’s going to break if you look at it the wrong way. 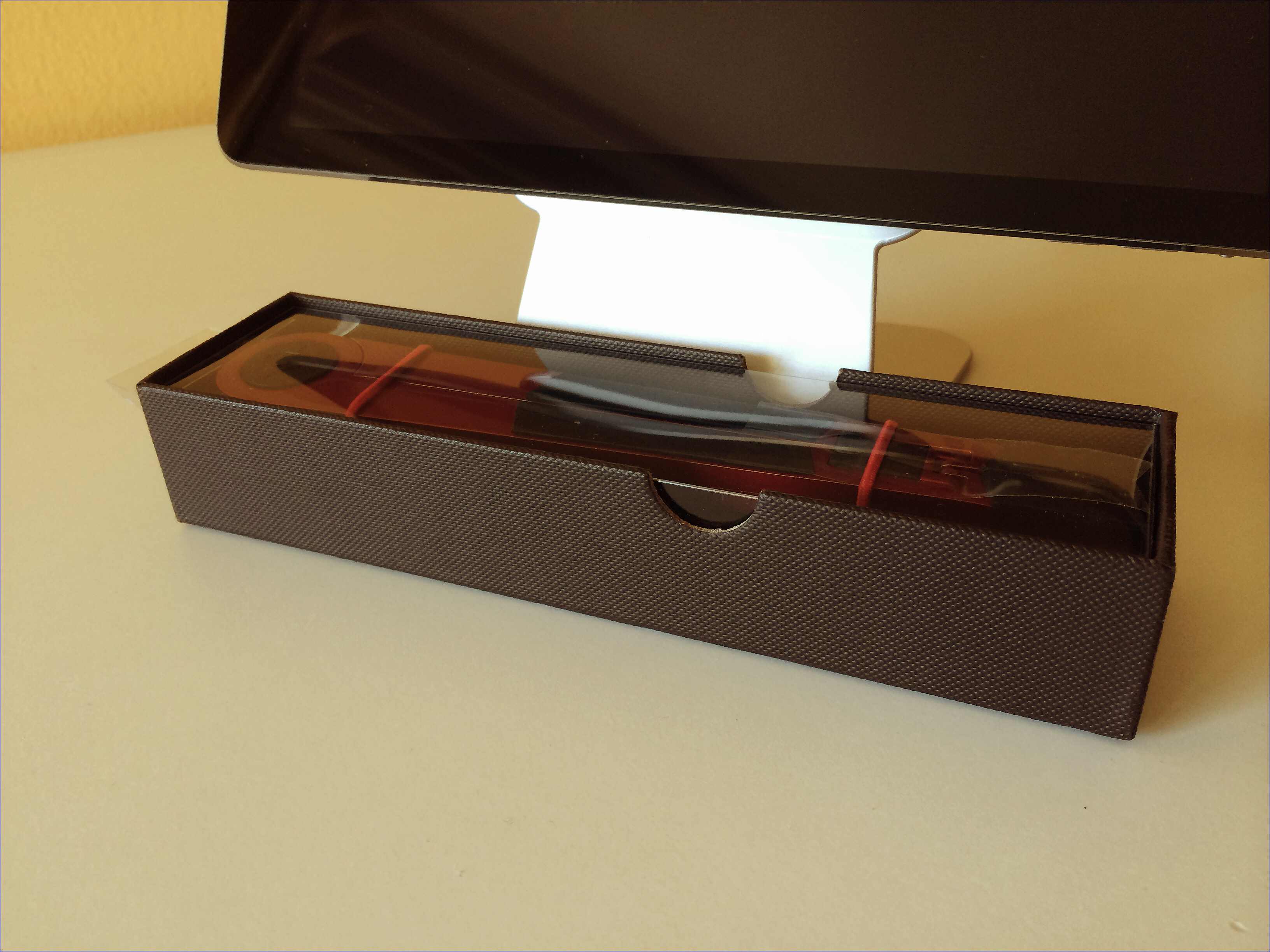 Thanks to smart engineering, it folds flat to literally fit inside your pocket, stowing in an included 7×1 inch padded nylon travel case (instead of a velvet one like before). Air travelers needn’t worry: Compass 2 doesn’t violate any TSA restrictions so airport security shouldn’t have any issues with it.

How does Compass 2 work?

Compass 2 supports two modes: the 55-degree angle for enjoying content and the low-angle typing mode at about fifteen degrees.

There are three large legs: two upfront ones, each sporting a smaller leg to hold your device upright, and a third leg on the back to stabilizes the stand at a 55-degree angle. 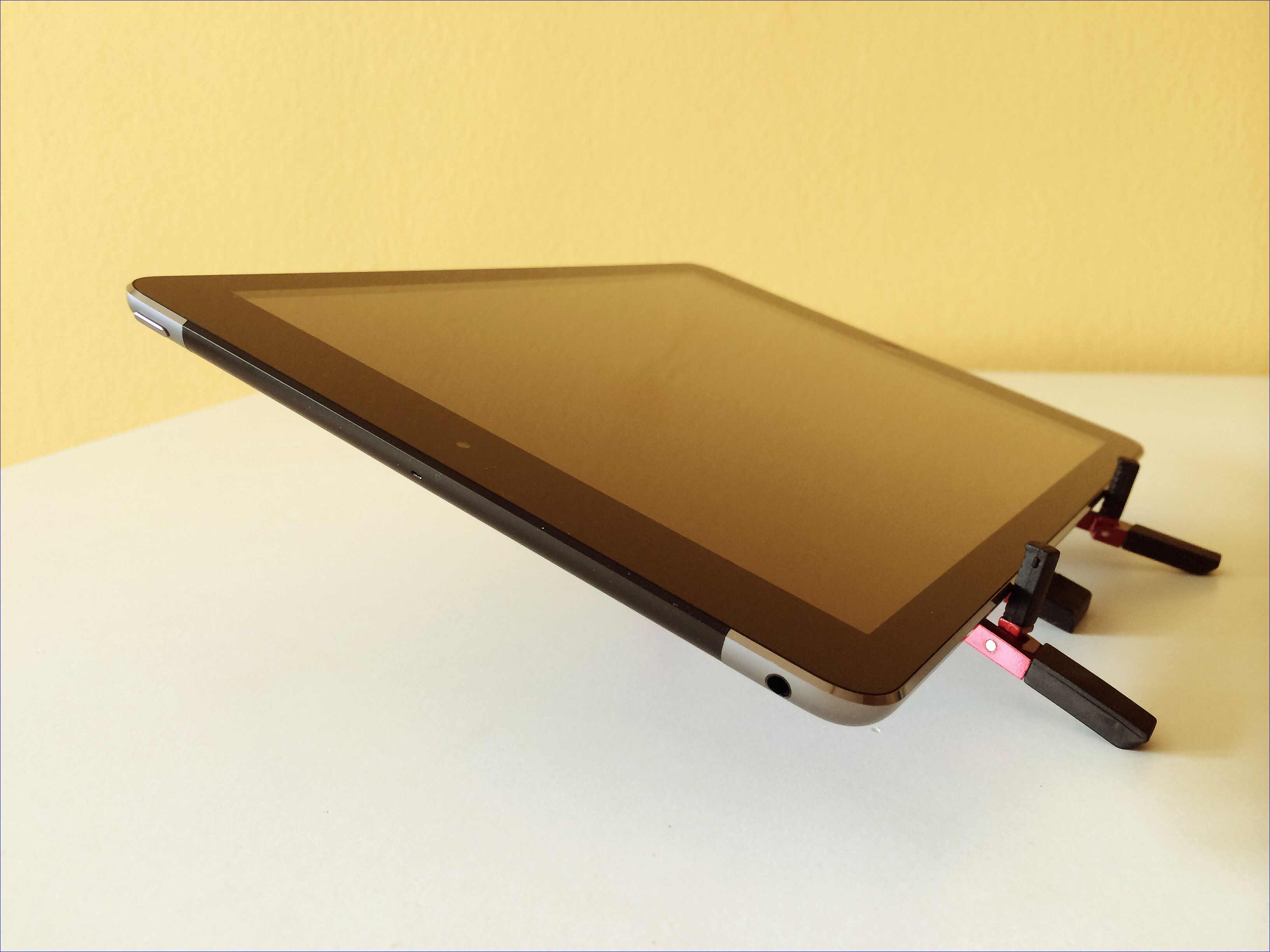 To transform from viewing to the typing angle, you just close the back leg and fold down a shortened secondary one in the middle of it. This will allow you to rest your device at a low-angle position suitable for typing.

The original edition suffered from its front legs not being close enough to support the iPad mini in portrait orientation comfortably. Compass 2 has addressed this design oversight by bringing the front legs about an inch and a half closer together so now your full-size iPad and iPad mini now both can be docked easily. 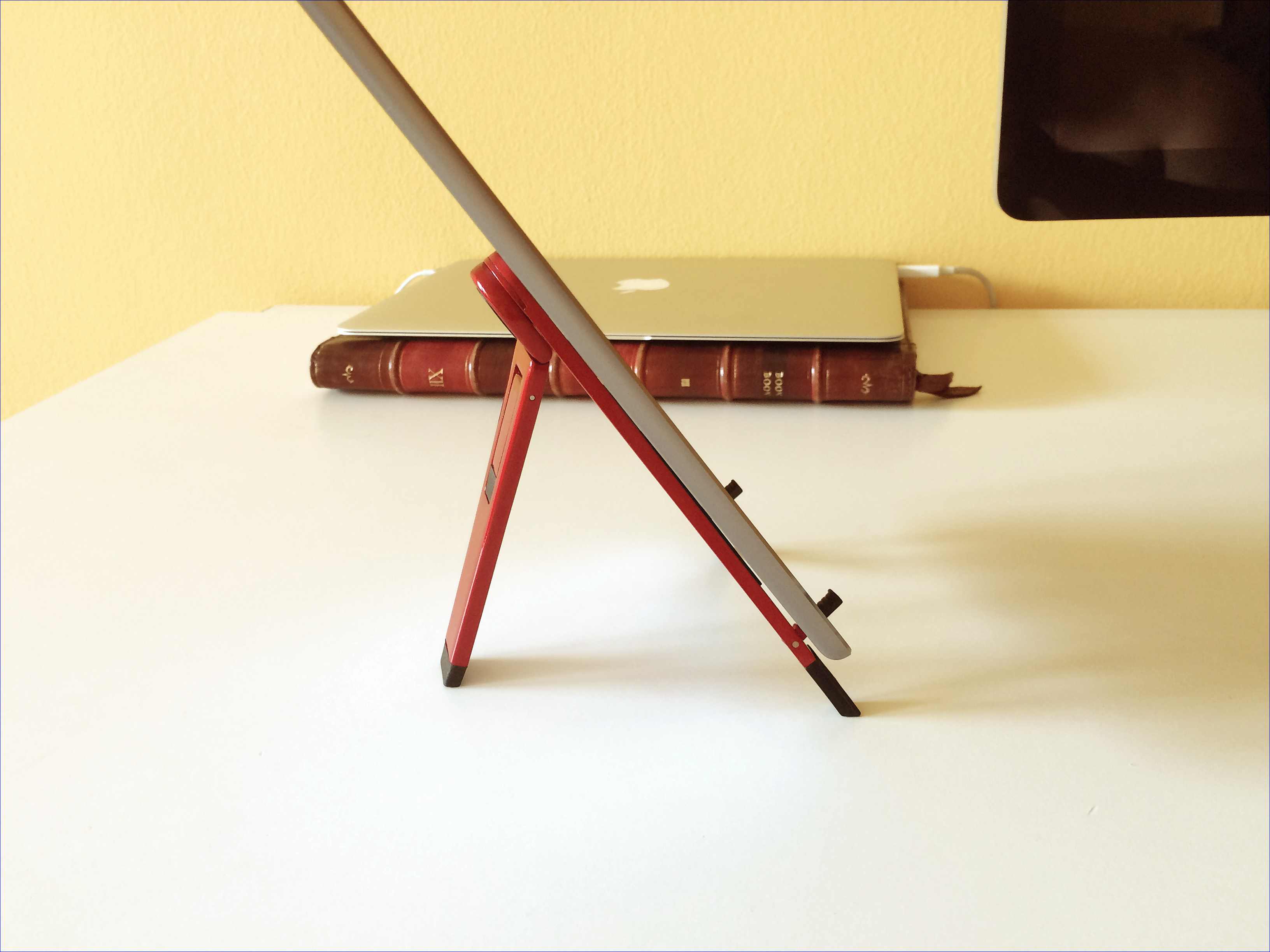 In the background: my 13-inch MacBook Air on top of Twelve South’s BookBook case.

Unlike before, when you flip open the rear leg, it now locks in place with a reassuring click, which is nice. This car door-like behavior also ensures you won’t knock your iPad over when you tap the screen to interact with your content. 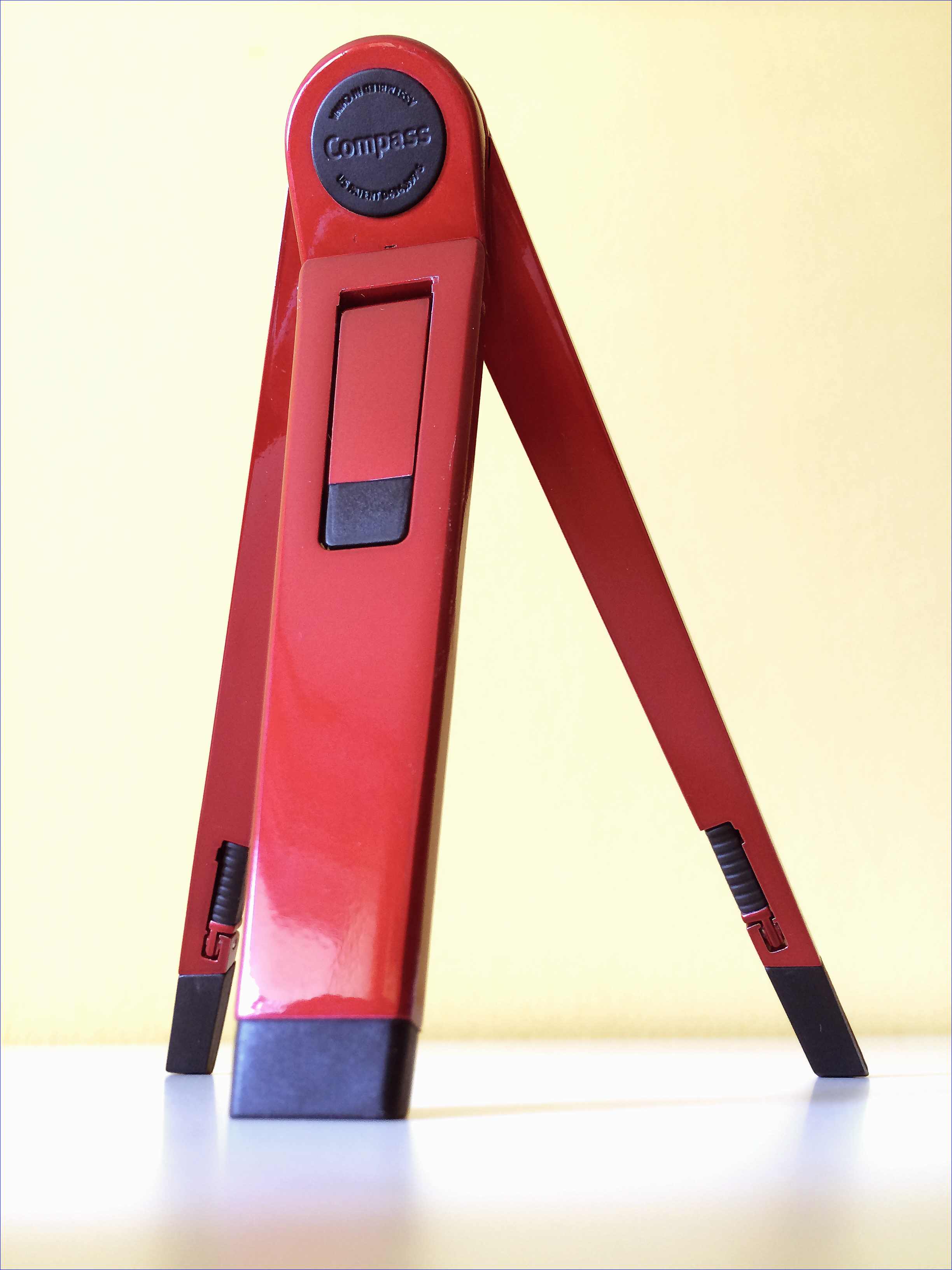 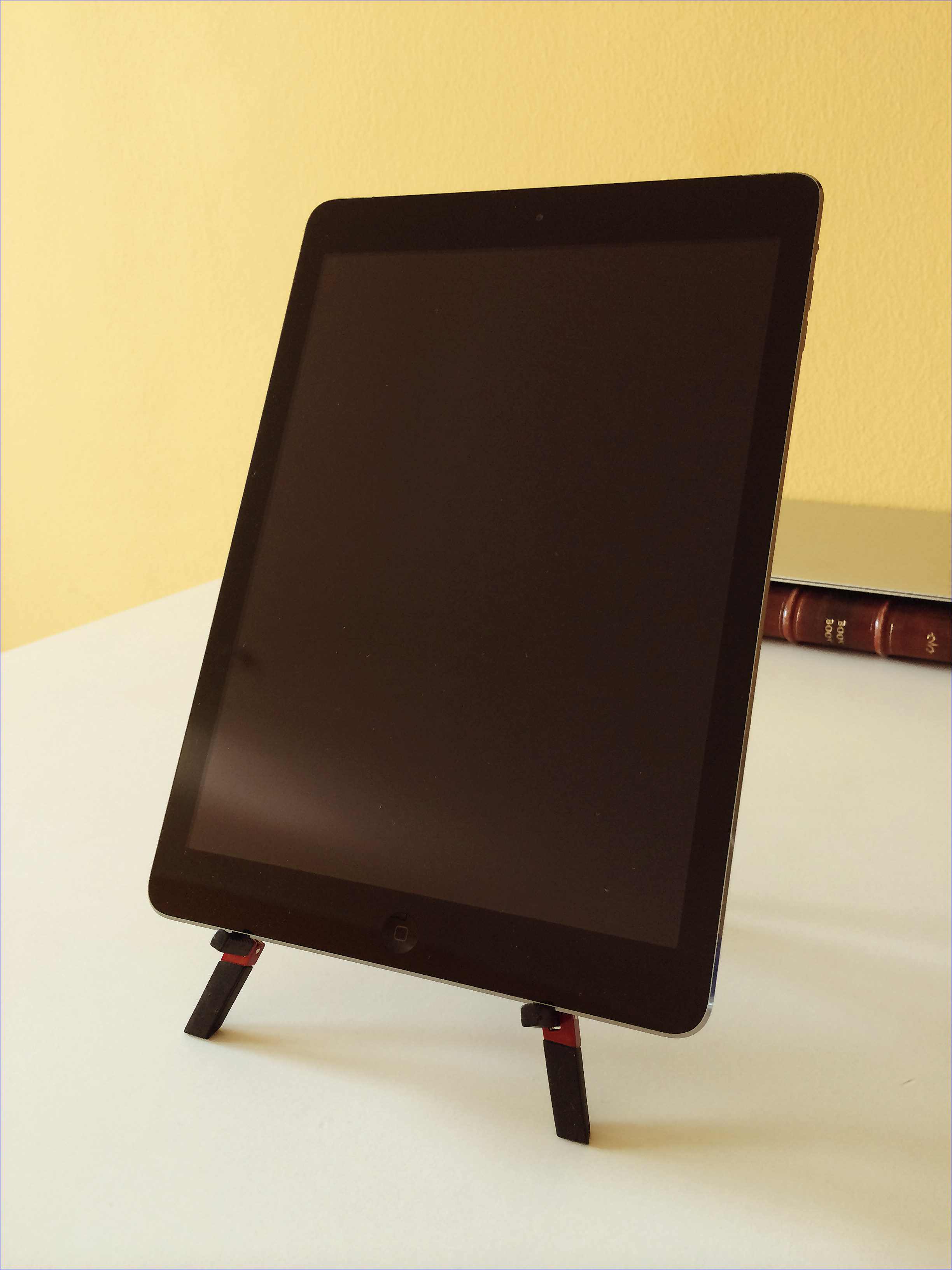 To ensure the metal stand won’t scratch your iPad – or your table, for that matter – Twelve South has covered every piece that touches the device in soft protective silicone which adds extra grip.

This includes not only the legs, but also the arm supports and – as an added nice touch – the Twelve South logo itself. And don’t fret about the whole stand wobbling when typing on your iPad or tapping on-screen objects. 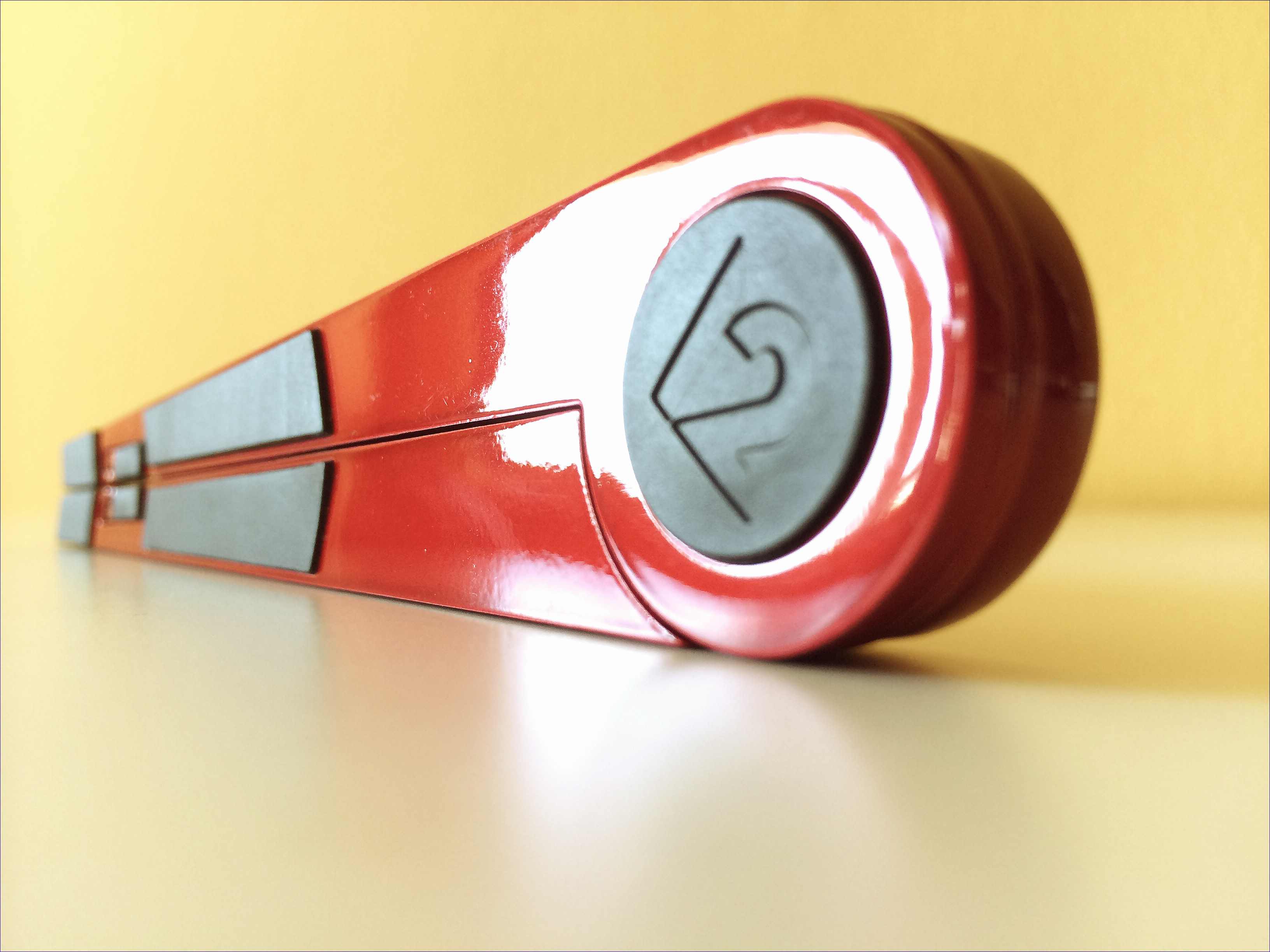 That’s because the silicone protection does a really good job of keeping the stand attached to most surfaces, including glossy worktops like mine. It also prevents the device from shifting when placed upon the stand and reduces wear on surfaces. 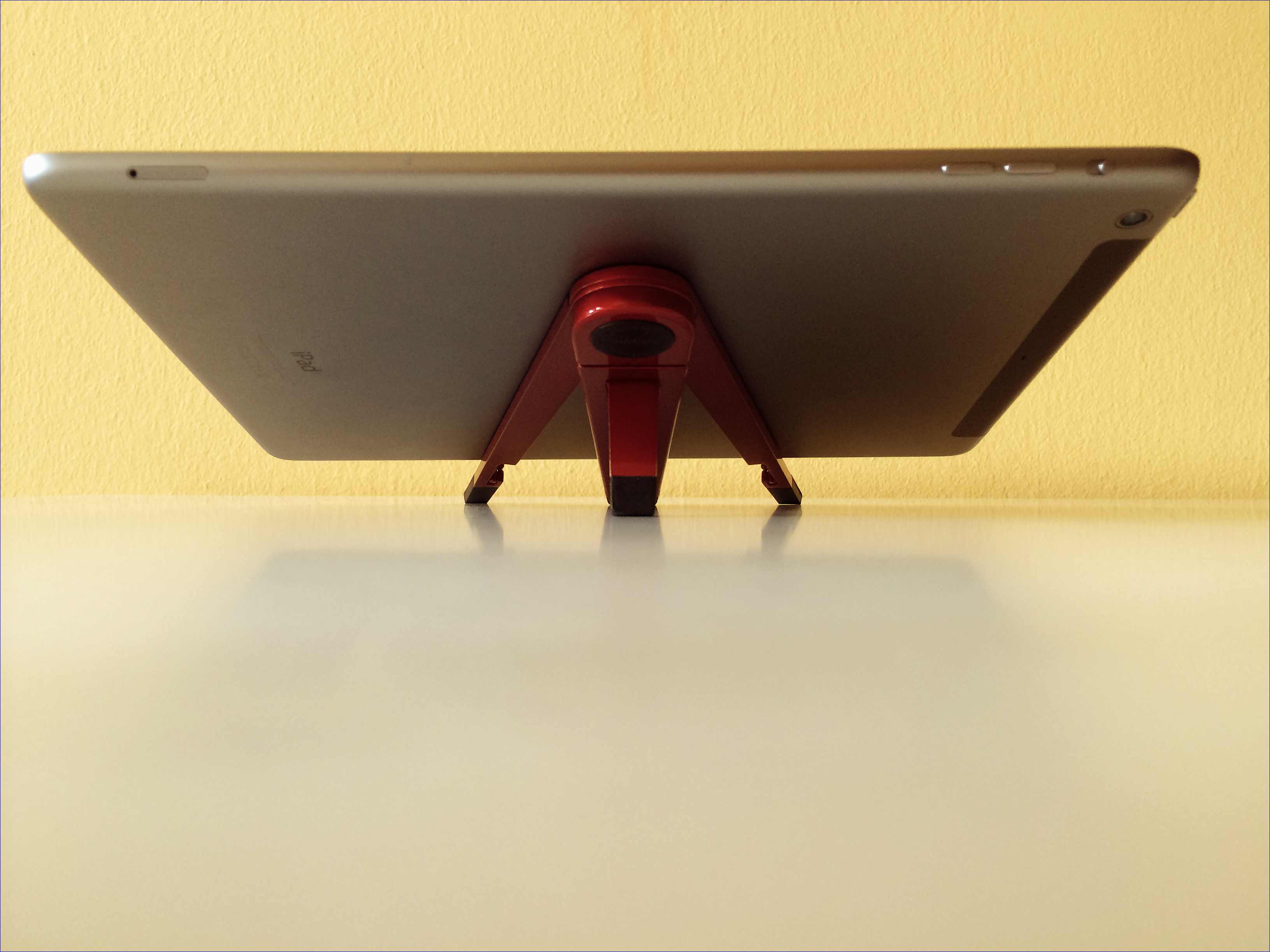 It certainly pays to agonize over every detail.

What’s it good for?

I’ve found the 55-degree angle perfect for FaceTime. It’s just more natural because the stand elevates your iPad so the camera sits higher.

When propped up in portrait or landscape, your iPad also becomes the perfect canvas to show off your vacation photos to friends and family, watch video and listen to music enhanced with full-screen cover artwork. 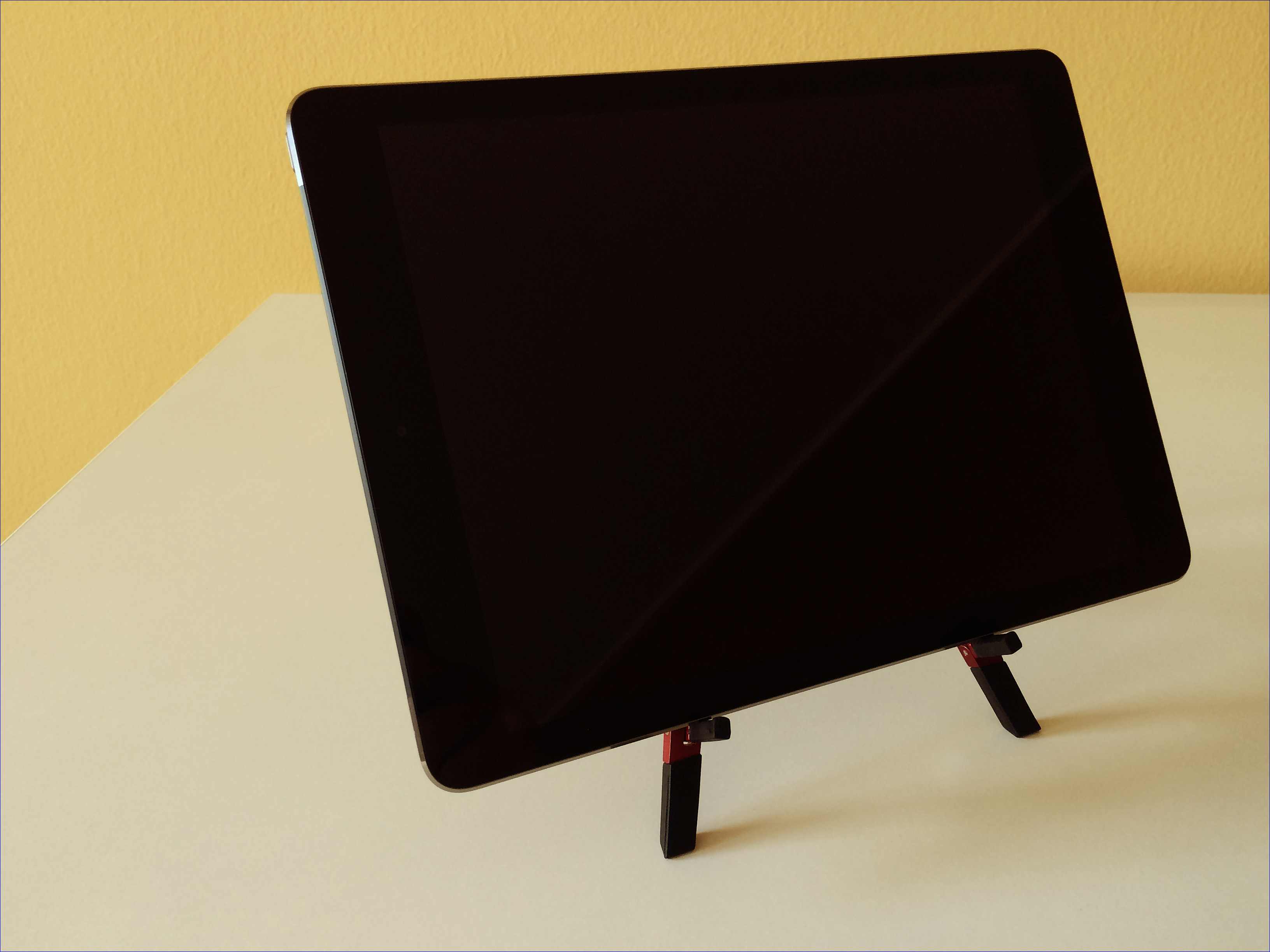 It’s not just about media consumption: the upright mode lends itself nicely to keeping tabs on Twitter and other social media channels or engaging in a myriad of other second-screen activities which don’t require a lot of typing, copying and pasting.

The secondary leg is perfect for prolonged text entry. You could write a novel when leaned down and this typing wedge works remarkably well in a number of scenarios, especially when on the move. 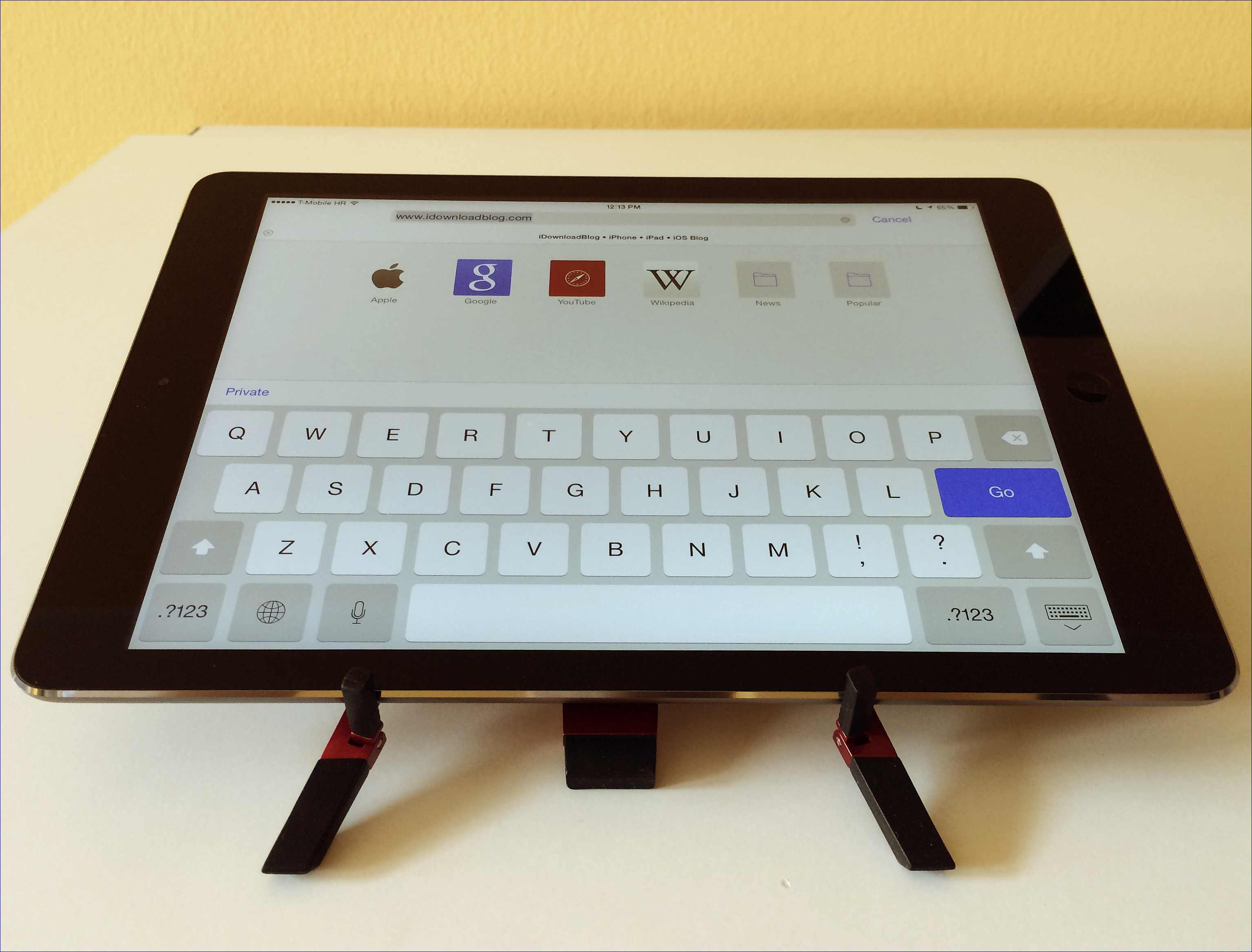 In fact, I wrote this entire review on my iPad – the first half on the train and the rest while sipping my coffee in the sunshine in a trendy little part of the city this morning – and not once did I feel impeded by the imperfections of typing on the virtual keyboard. 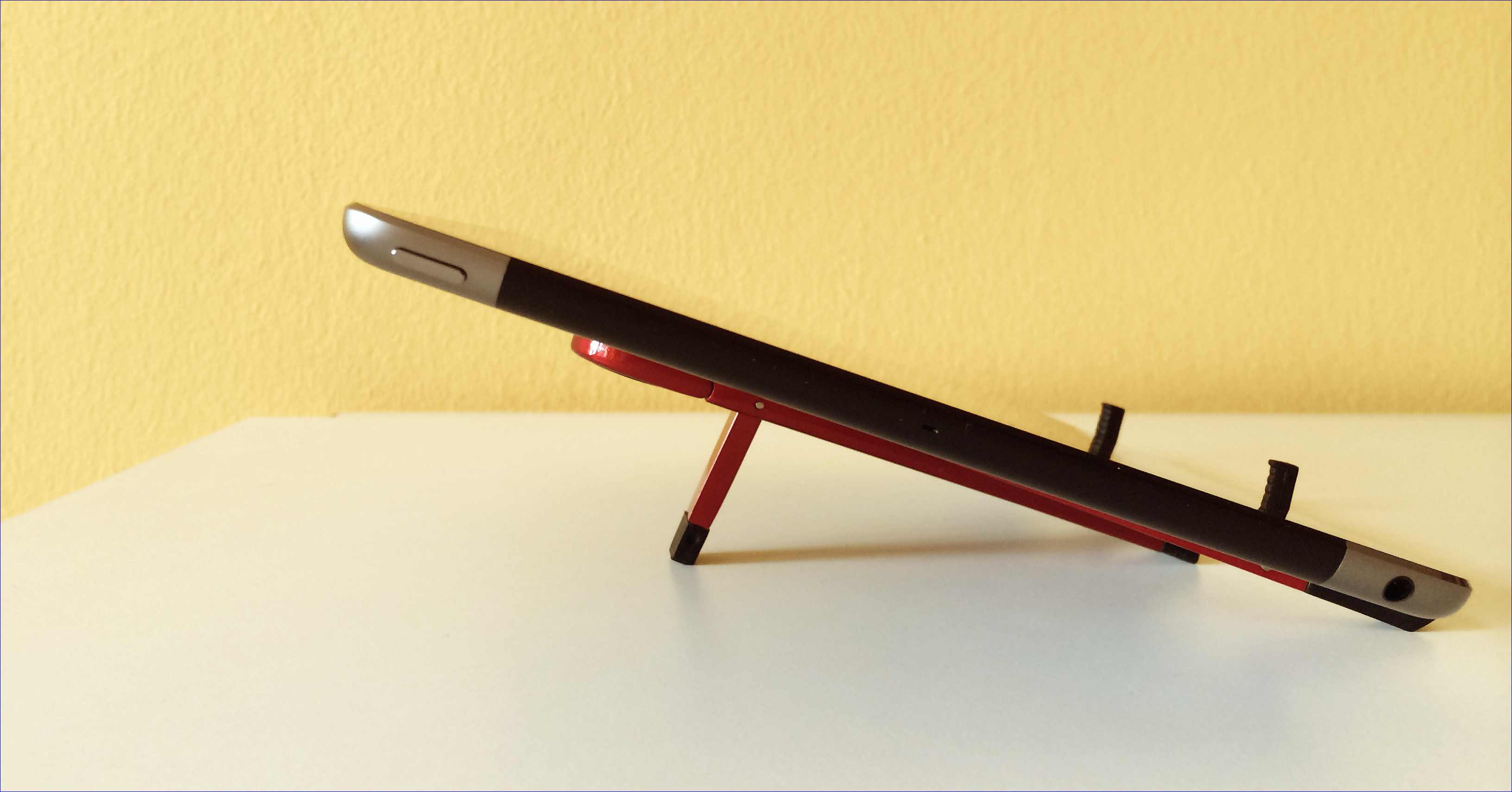 Do I need one?

I’ve tried many different kinds of stands for my iPad.

Compared to Dekke’s Slope Slope, Belkin’s FlipBlade Adjust and a host of other more or less innovative tablet stands, Compass 2 emerges victorious in terms of versatility, good looks and portability. It’s just way sturdier and more functional than the original.

If you’re in the market for a fully functional, truly portable and yet affordable iPad stand, I’d seriously recommend giving Compass 2 a shot. But wait, why not use the Smart Cover instead?, I hear your cry. 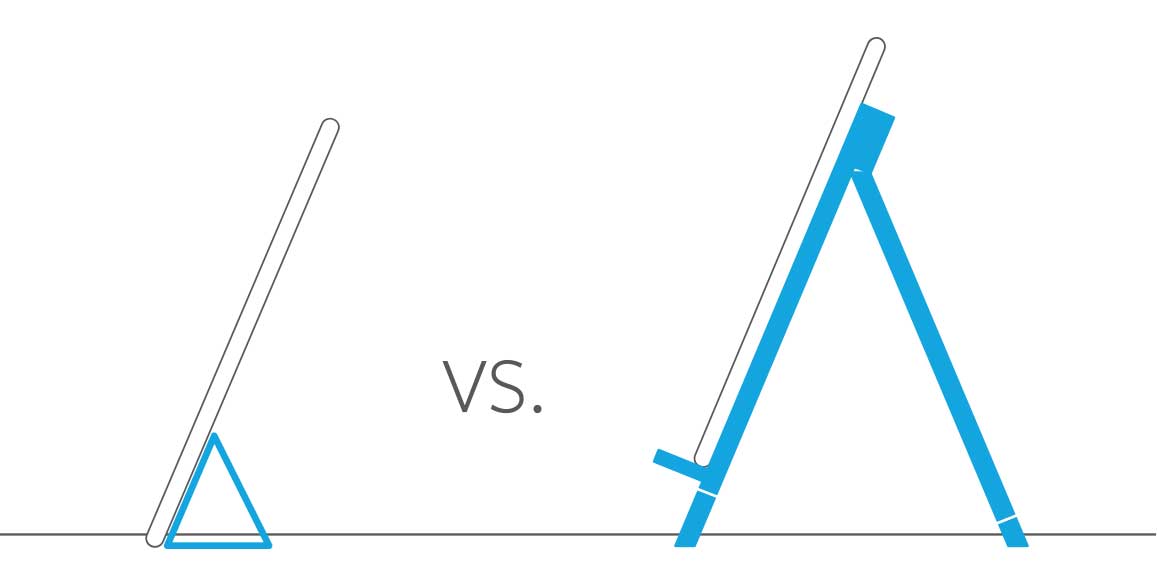 The thing I’ve always hated about Apple’s Smart Cover and loved about Compass 2 is that it elevates my device up out of the danger zone, in either orientation. If you’ve ever used an iPad in the kitchen to follow recipes while cooking, you’re aware of the dangers of your iPad getting soaked in spilt milk.

Laugh all you will, but a lot of people tend to check out the news while enjoying their tea in the morning, FaceTime while having lunch, sift through their email and enjoy their smoothie at the same time and what not. 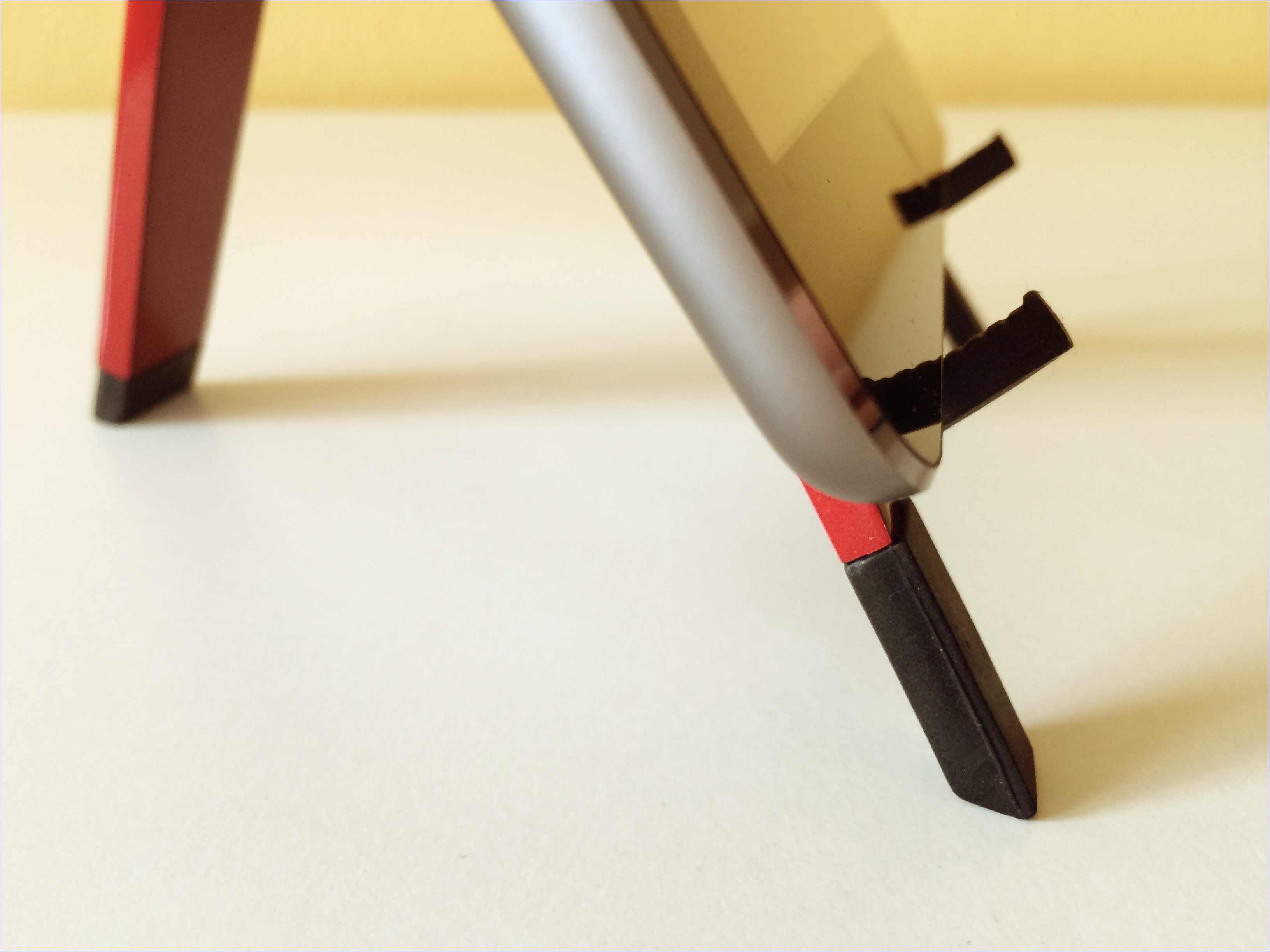 If you multitask like this, you’ll be glad that Compass 2 elevates your device out of these typical danger zones. Besides, it does resemble a kitchen until a bit, doesn’t it?

Shut up and take my money

If you’re going to be using an ultra-portable tablet such as an iPad wherever you go, you better pair it with an equally portable stand. 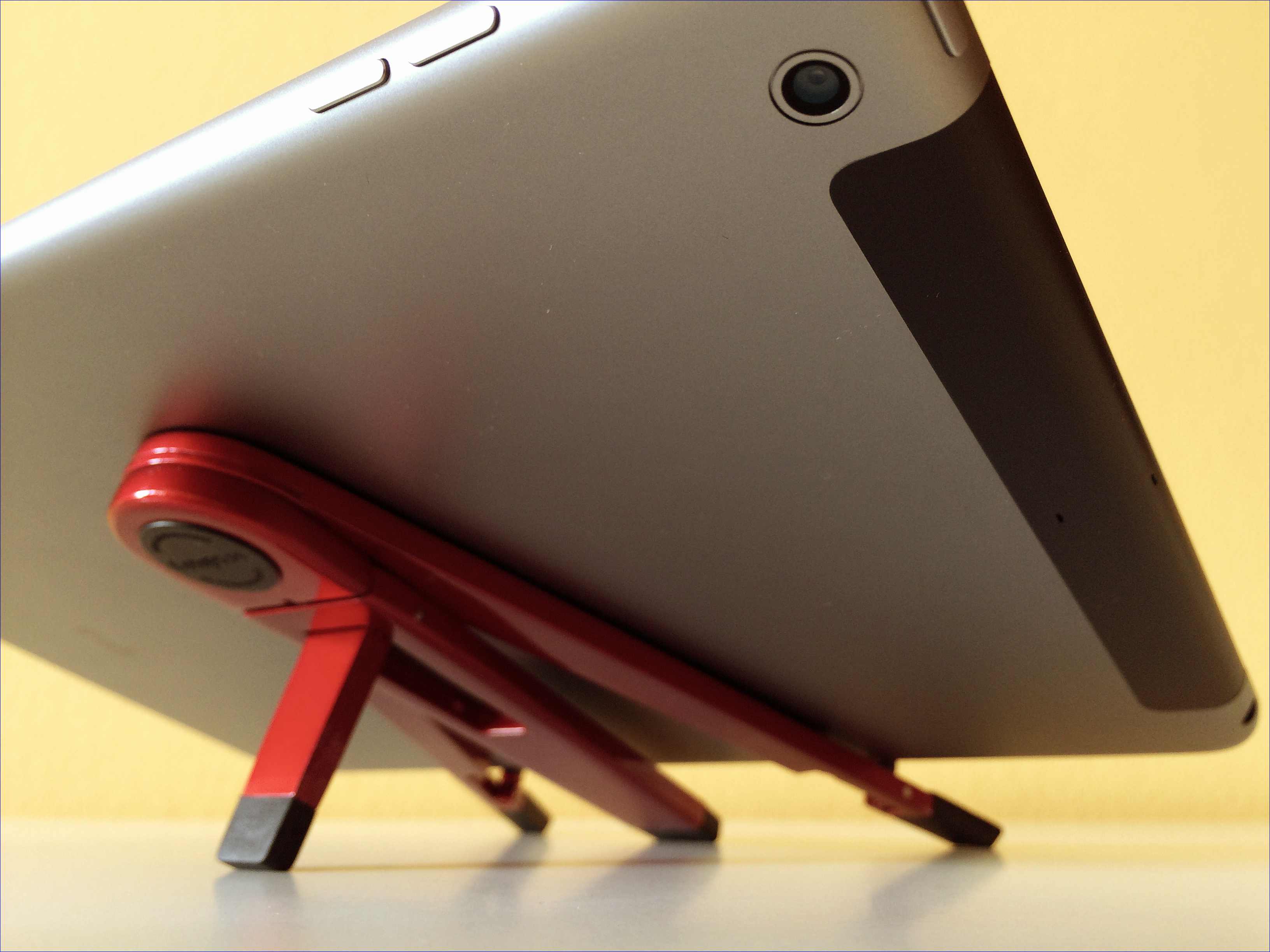 Compass 2 is available in Silver, Tactical Black or Candy Apple Red for $39.99 at Amazon. It ships free in the United States, and for a low flat rate in a bunch of international markets.

The asking price is the same as Apple’s less functional Smart Cover and compares rather favorably to the vast majority of multi-angle iPad stands from other vendors. 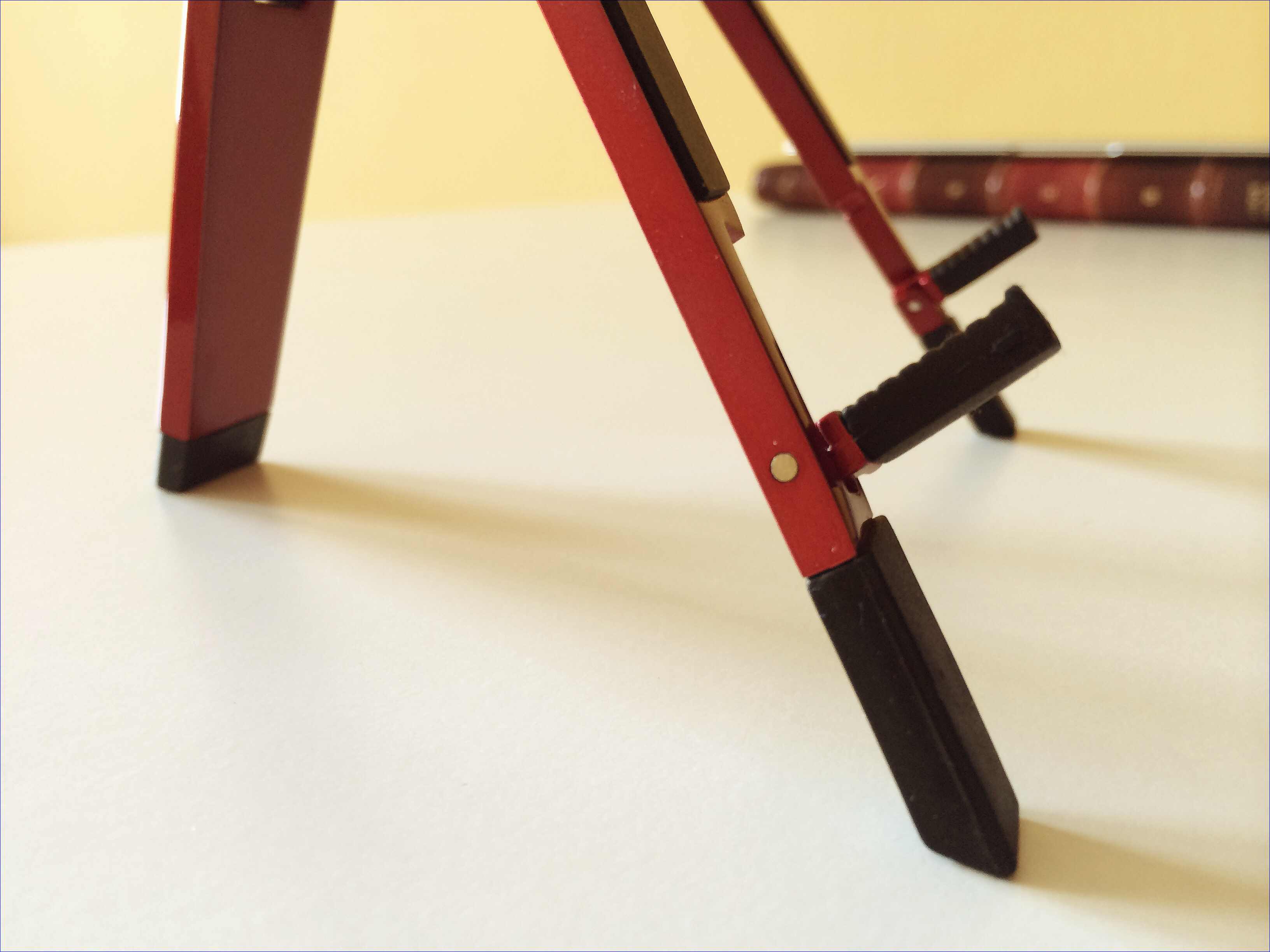 Compass 2 at a glance

Buy the Twelve South Compass 2 it on Amazon