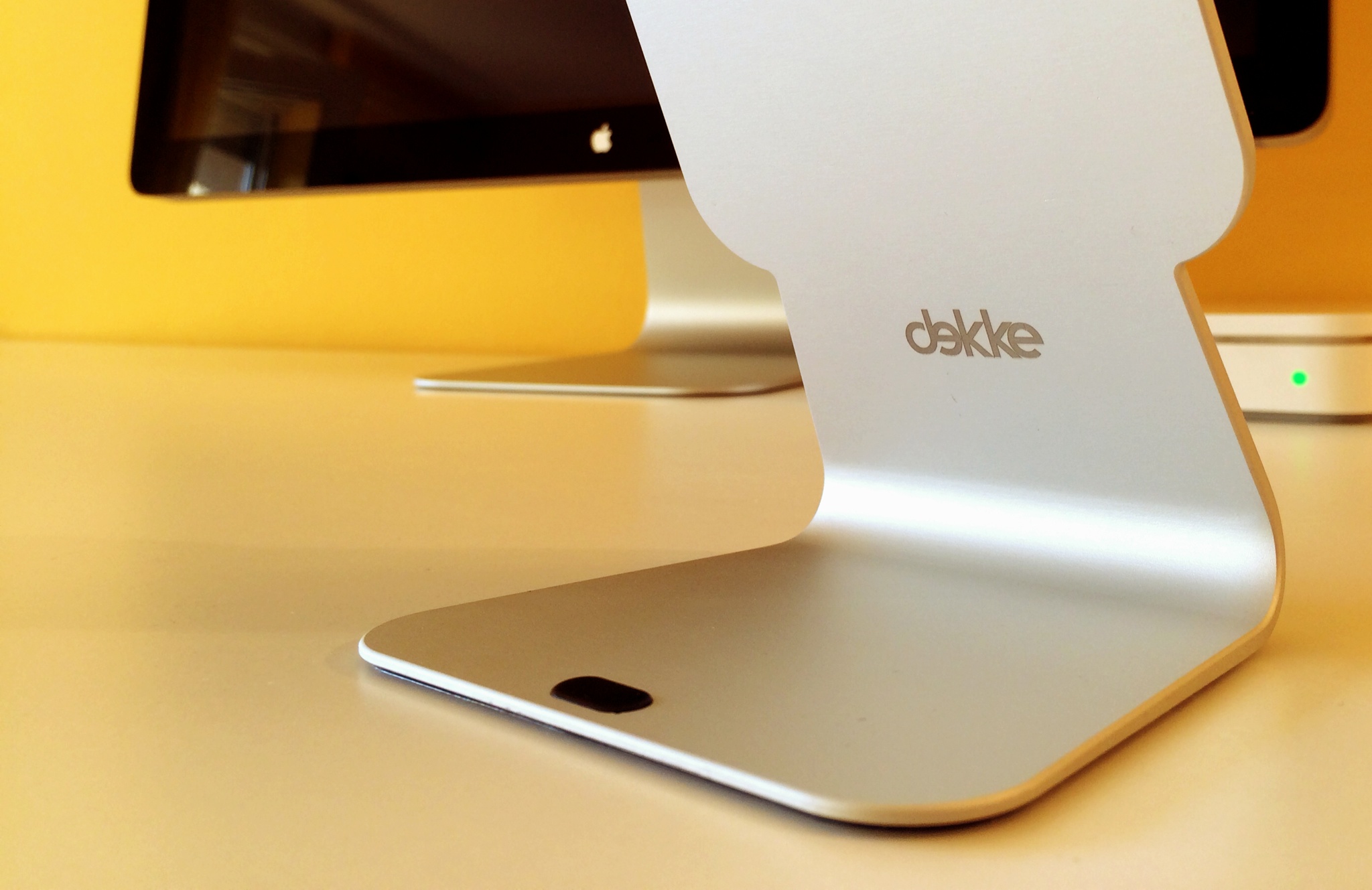 Following a round of a successful Kickstarter campaign I wrote about a year ago, the wonderful Slope iPad stand finally went on sale in early-November. Without sounding melodramatic, this is hands down one of the very finest tablet stands I have ever seen or tried.

A brainchild of Chicago-based designer Erik Kittlaus, the aluminum-clad Slope is wonderfully minimalistic. It resembles the base of an iMac stand and suspends your tablet mid-air using innovative technology which requires no moving parts.

Erik was kind enough to ship a review sample over. Having played with my Slope for the past week or so, I fell in love tremendously with it, so much so that it’s quickly replaced Ozaki’s iCarry Excavator as my primary iPad stand. Read my full review right below…

Before we begin, it Erik’s last name sounds familiar to you, that’s because his brother, Norwegian-born Dag Kittlaus, is one of the four Siri co-founders, a search intelligence startup established in 2007 that Apple famously bought to create its namesake digital personal assistant (Dag left Apple two years ago to pursue other endeavors).

The Slope is the fourth product Erik has developed and the first he is bringing to market following the successful fundraising campaign through Kickstarter.

I’ve been using the Slope for more than a week now and it immediately won my heart. 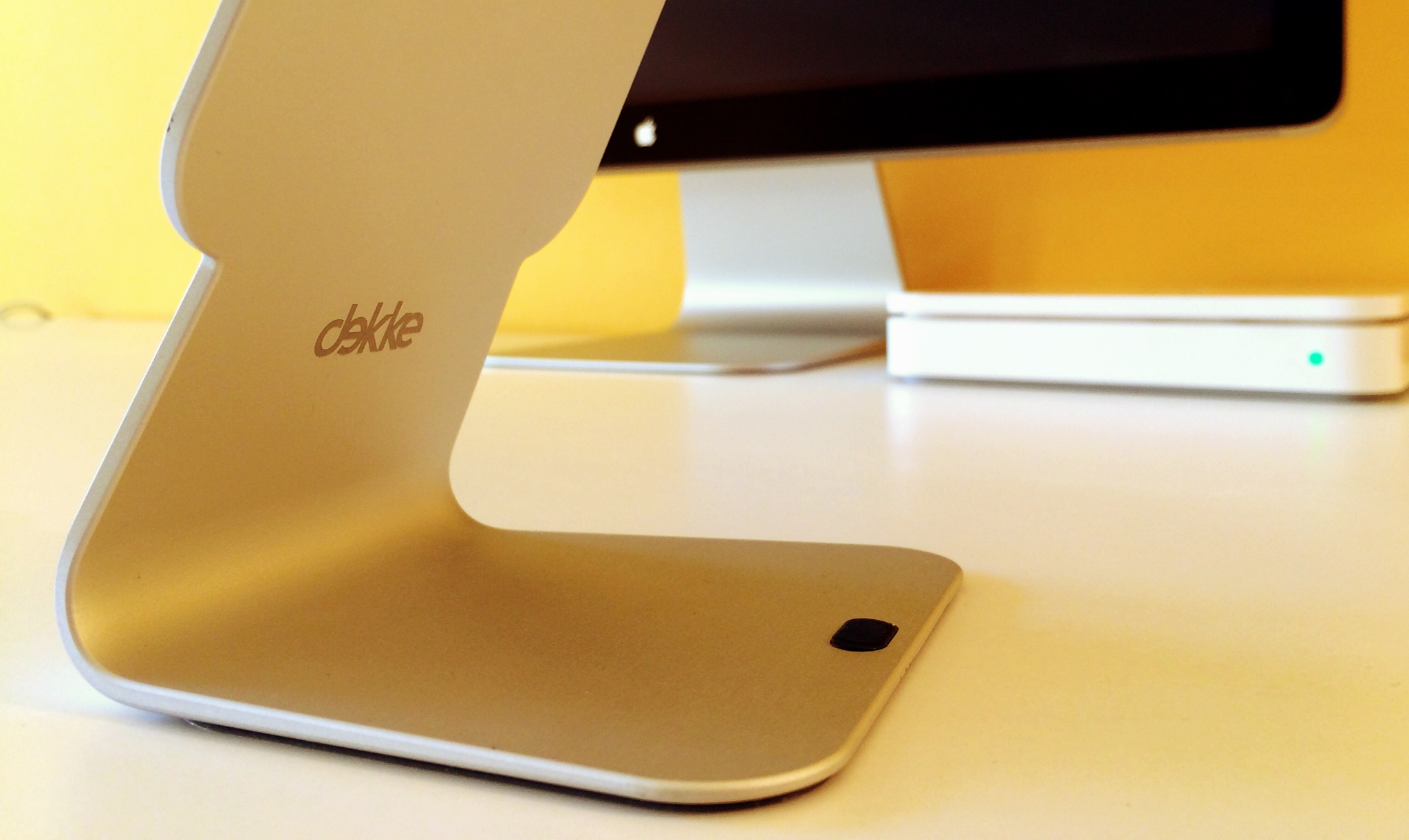 The accessory anchors itself to the table and other flat surfaces and grips my iPad Air from behind while leaving all four sides freed up for a nice hands-free experience.

The microscopic suction technology behind the Slope is based on literally thousands of tiny air pockets that function as mini suction cups.

The air pockets found within the nanofoam-laden black pads (which feel a bit spongy to the touch) are so small they’re invisible to the naked eye. Pressing the back of your device against the front pad forces the air out of the nanofoam pockets.

This creates vacuum that brings suction, which in turn secures grip. The effect is similar to the magnetic MiStand that we reviewed or the PadPivot, which also uses nano suction for hands-free experience. 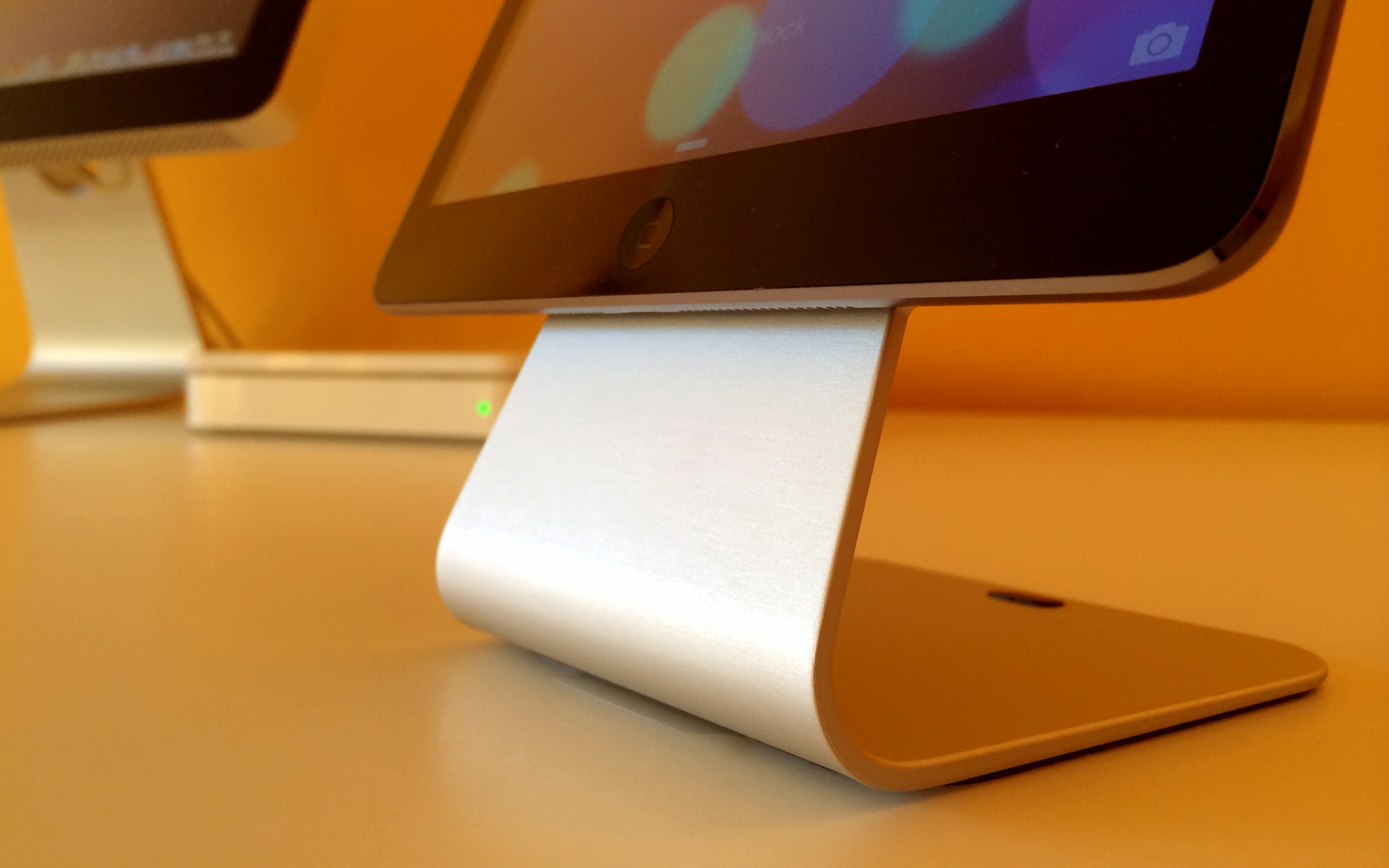 The Slope’s high-tech wizardry is seamless and flawless. There’s a certain mental barrier to sticking your device to the Slope’s flat pad and letting it just rest there without any visible support.

Putting it perfectly bluntly, I was kinda afraid that my precious iPad Air might somehow slide off. Skepticism aside, I was able to overcome that unsettling psychological barrier in my mind after a first few minutes of active use. 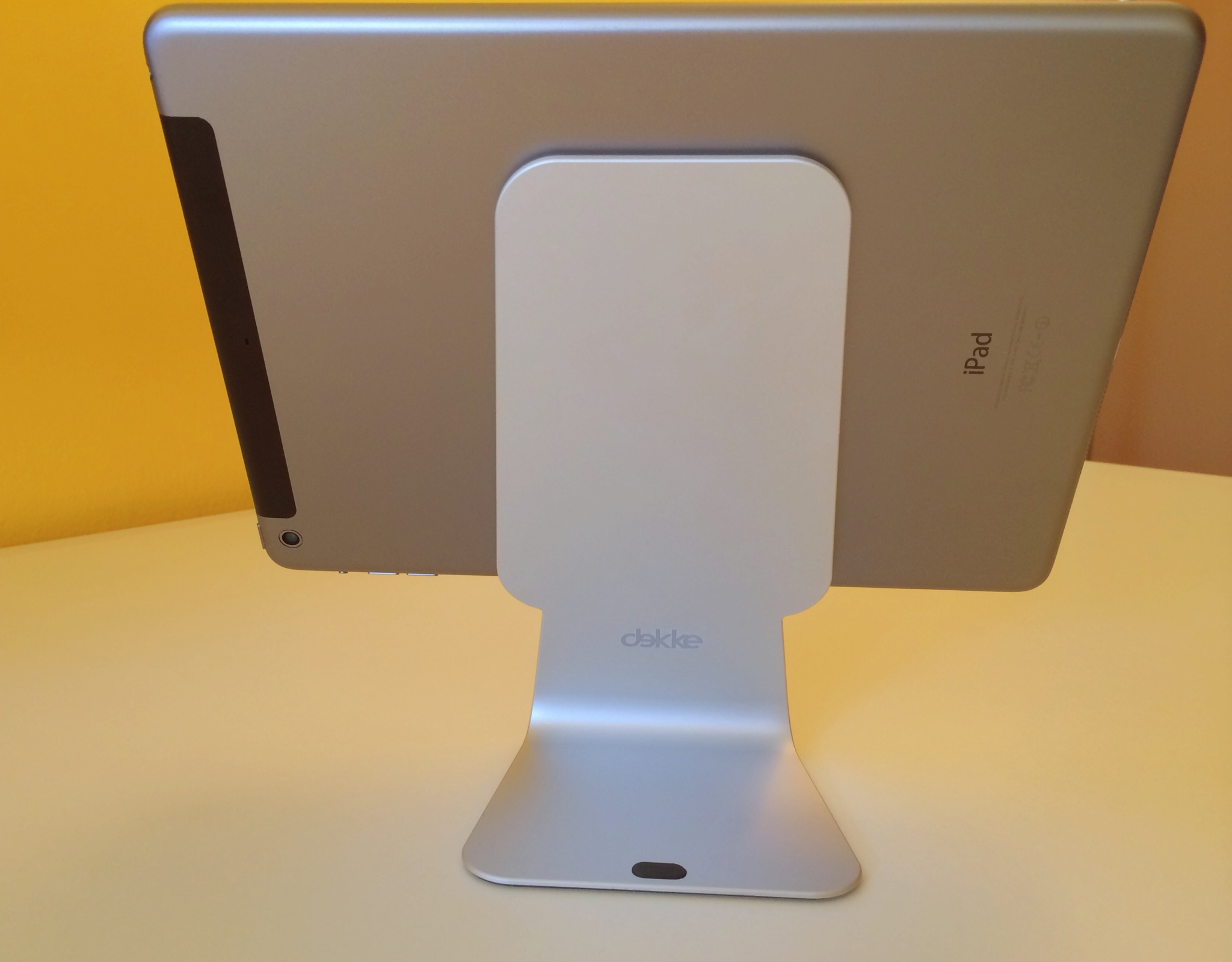 Soon enough, I learned that my fears were unfounded for the Slope most definitely works as advertised. The bonding between your iPad and the Slope is really tight and not once have I experienced any kind of hazard in terms of daily use. A magical stand for a magical device indeed is what first comes to mind. 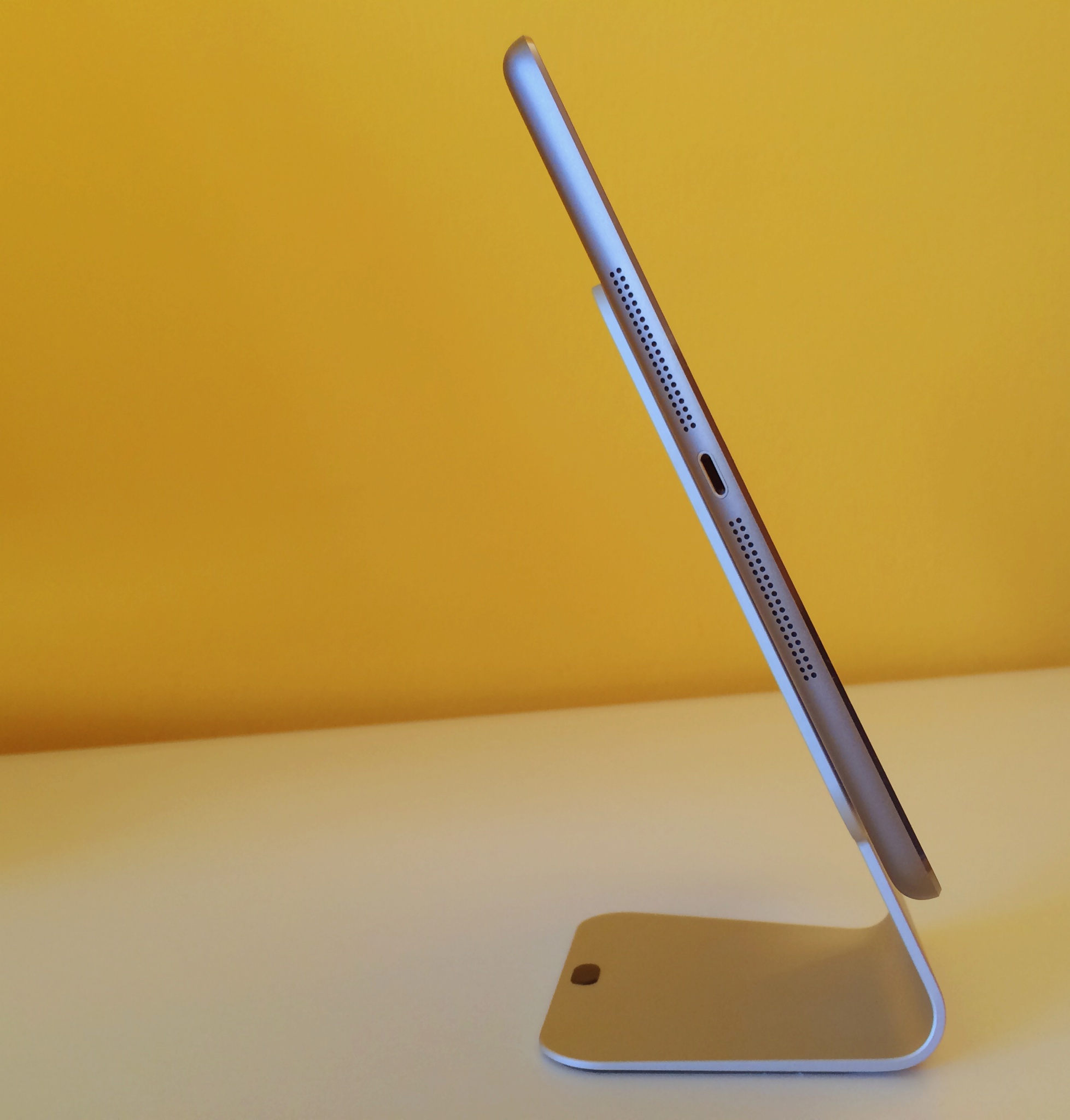 Erik has created a nice web page titled Show Me This Nano Foam Stuff which does a fine job on educating customers on the benefits of using nanofoam technology, while providing some useful tips and advice on using and operating the stand.

The Slop is supremely minimal and perfectly slanted.

The first thing you’ll notice is the Slope’s hand buffed, glass bead-blasted and hard anodized aluminum finish with the chamfer beveled edge. It really does look like something that would come straight out of Jony Ive’s kitchen.

The Slope consists of an aluminum base which takes cues from Apple’s iMac, with a nanofoam front and bottom surface which comes covered with a clear film cover. 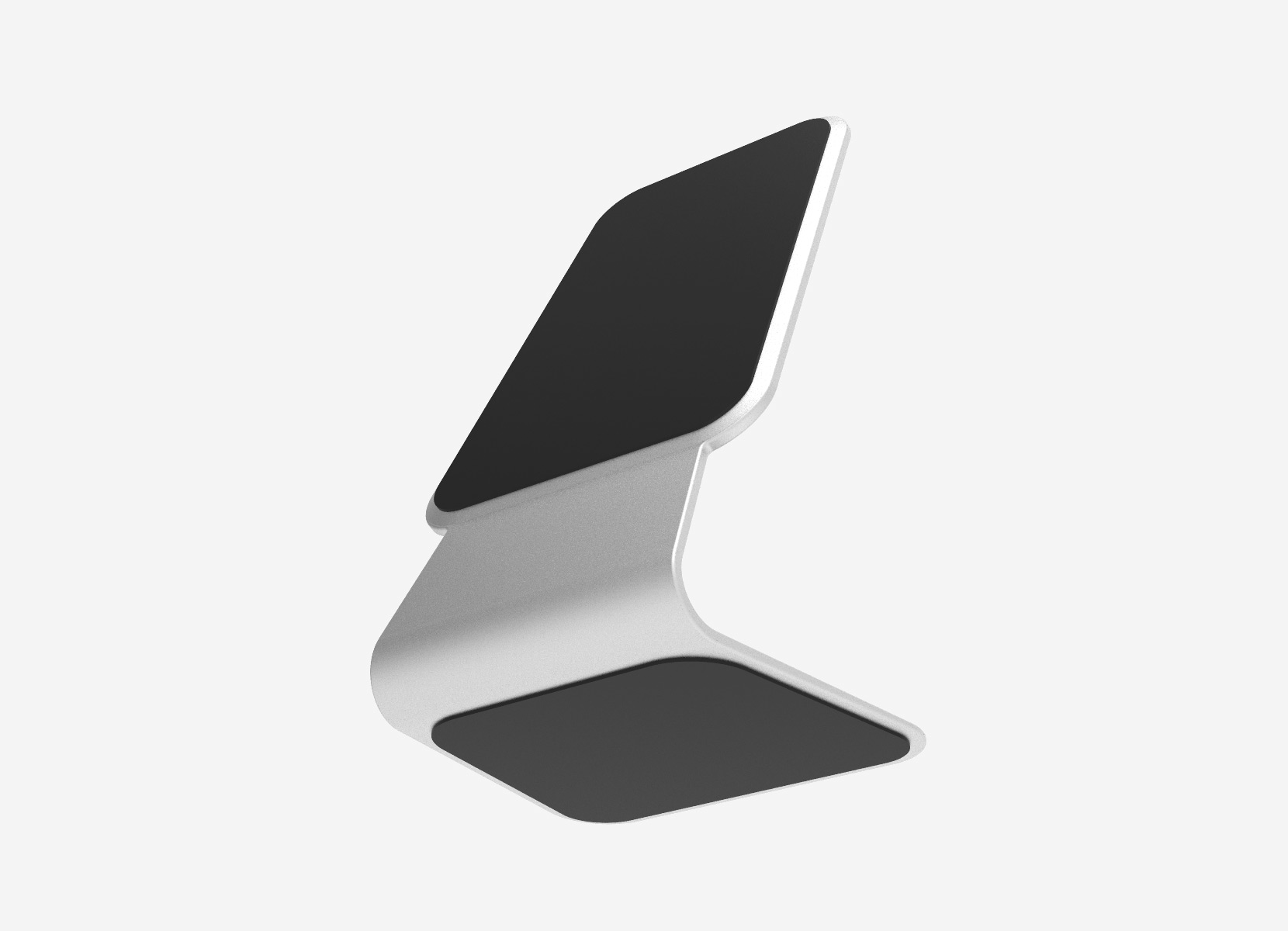 The bottom base has a pad that anchors the Slope so tightly that it becomes a natural extension of your setup, almost like it’s screwed to the table. The front surface pad of course secures your tablet in place. If you’d rather have it free-float across your table, just stuck the supplied plastic cover back to the bottom pad. 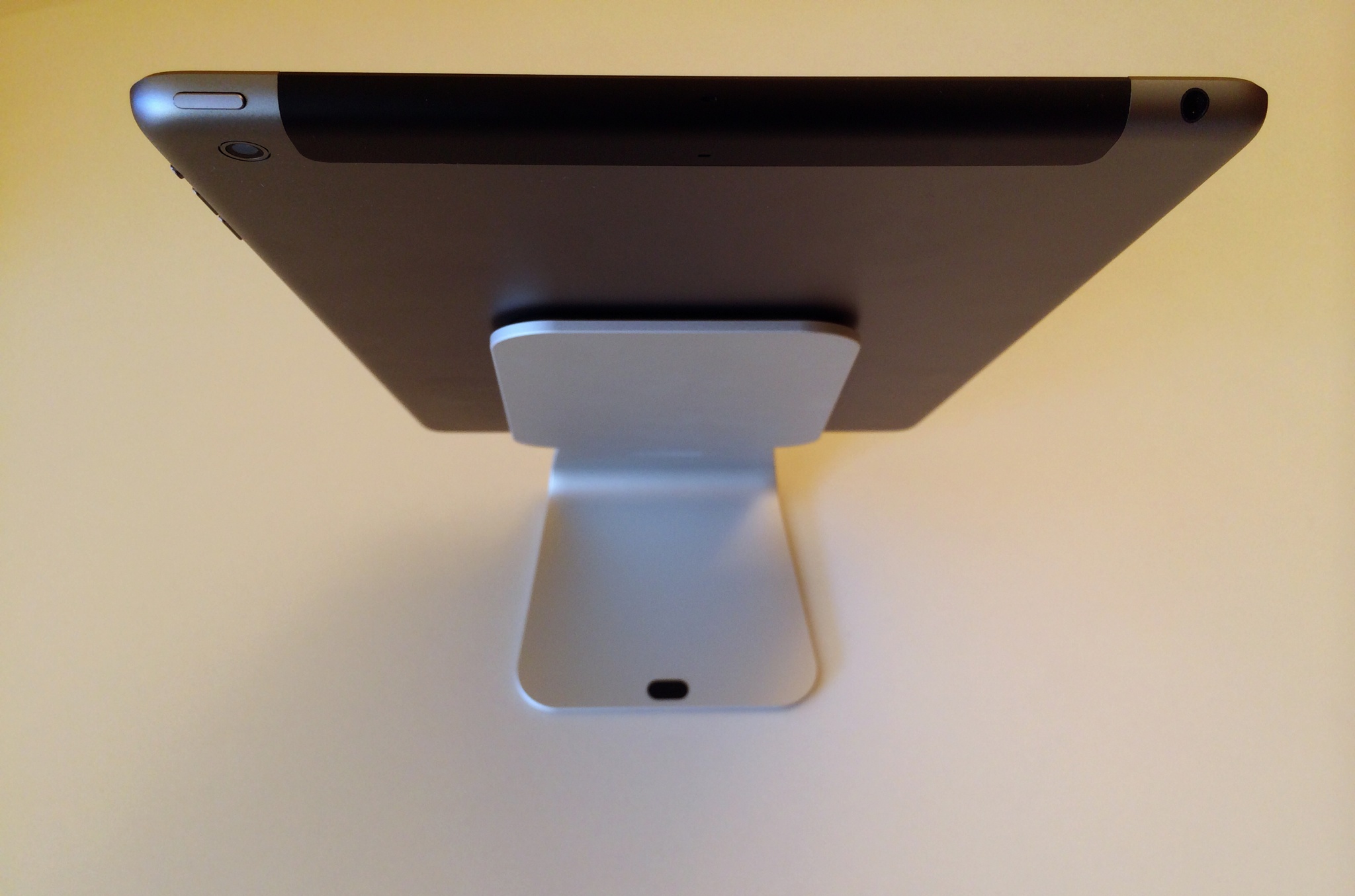 Having tested the Slope on a variety of surfaces, I’ve found that its bottom pad works best on common workbenches, coffee and kitchen tables or any kind of flat surface, be it plastic material, glass or wood – with the notable exception of certain types of wood grain and heavily textured surfaces.

To mount your device to the Slope, just press its back gently against the Slope’s front pad until it stays attached in either portrait or landscape orientation. Dismounting is a simple matter of pulling an iPad off with a slight grip. 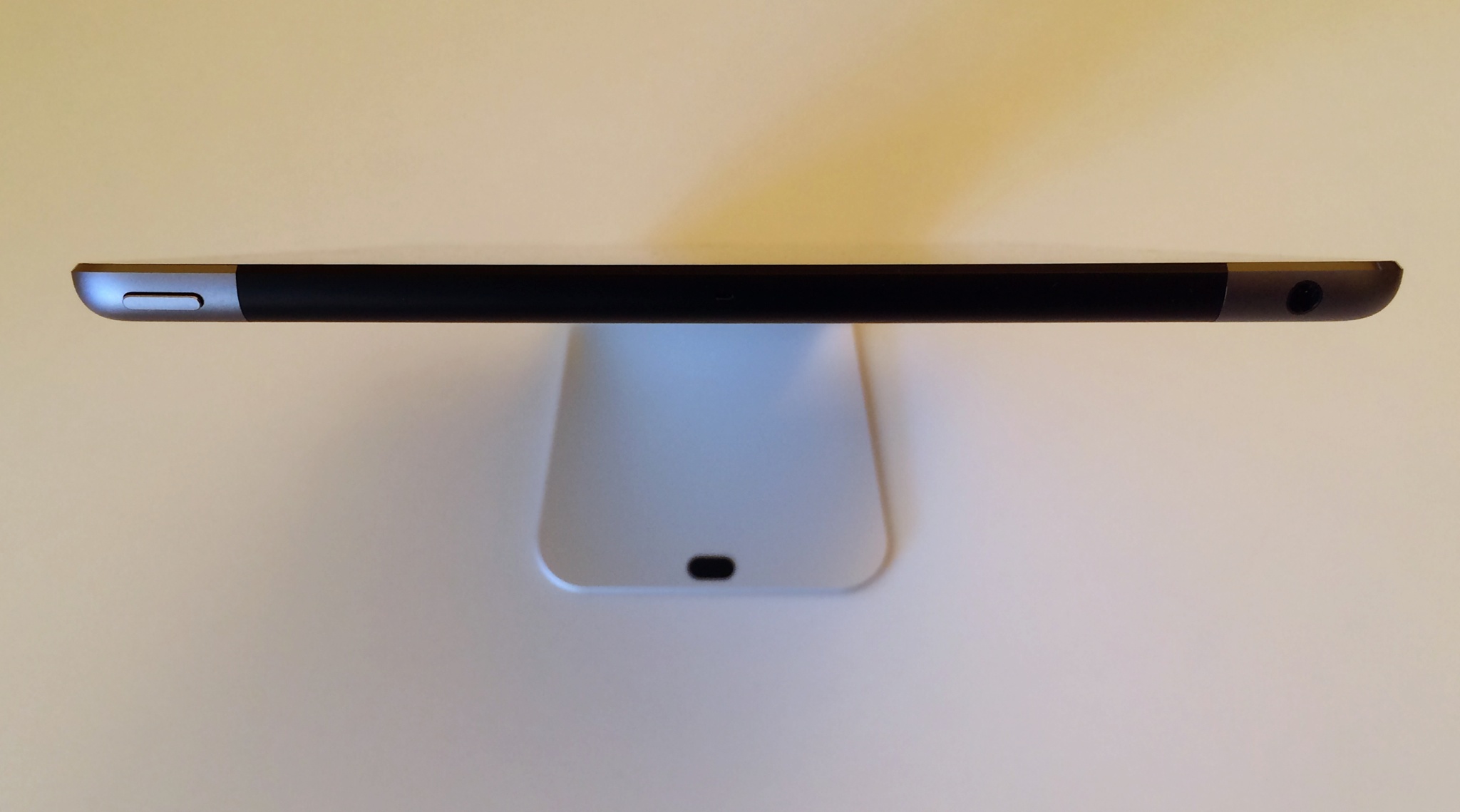 Opposite to what one might expect, the longer you leave the device sticking to the Slope the harder it grips because over time a greater number of air pockets collapse, increasing suction.

The plastic clear film that cover both pads are reusable so don’t throw them away.

Folks who’ll be using the Slope on the go should place the film covers across the pads for added protection against scratches and dust accumulation during transport. 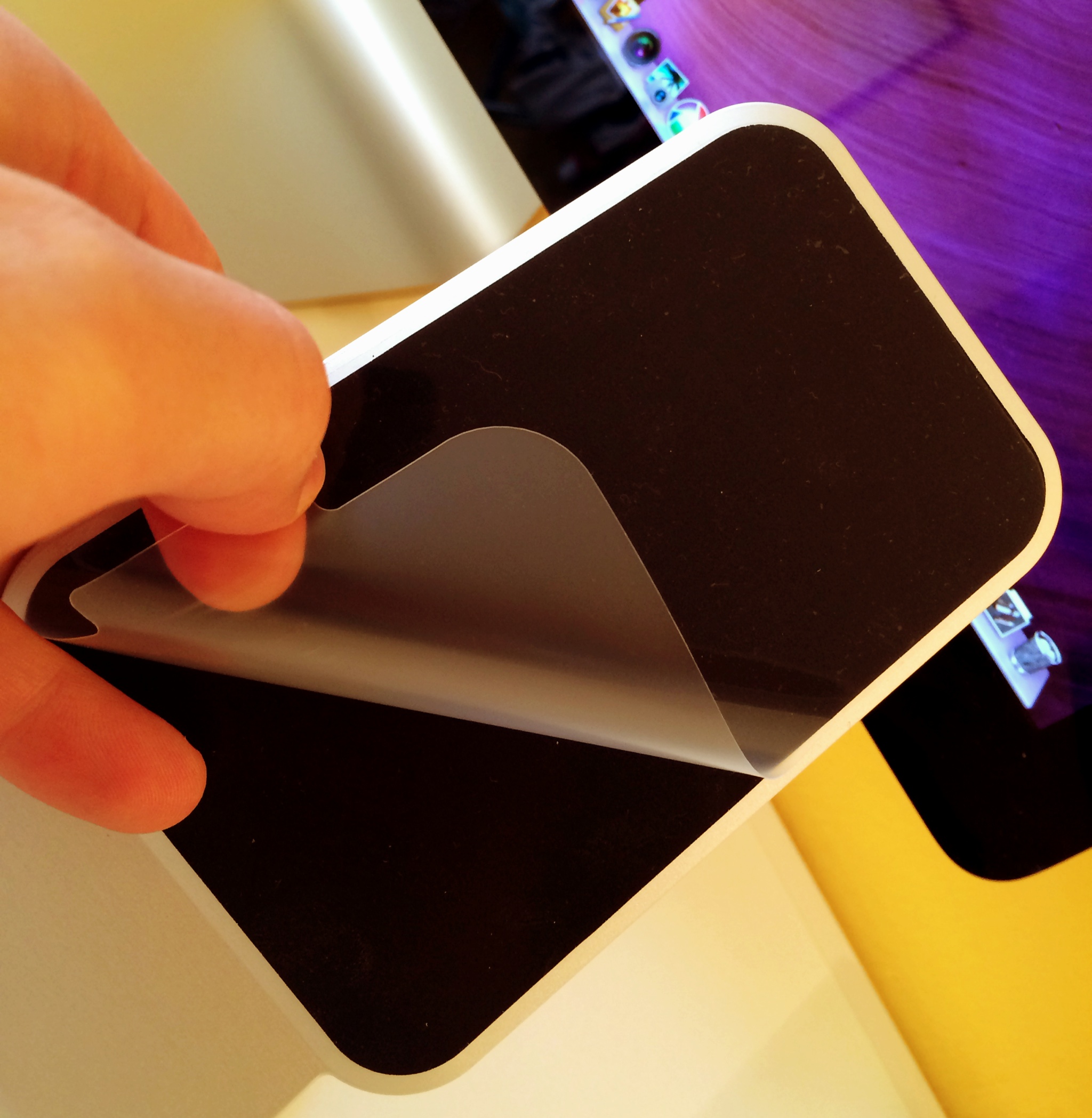 Speaking of dust, over time some dust will inevitably build up on the pads. That’s where the included towel comes into play: just dampen it a bit and wipe the surface of the pads gently once or twice a week and you’ll be good. 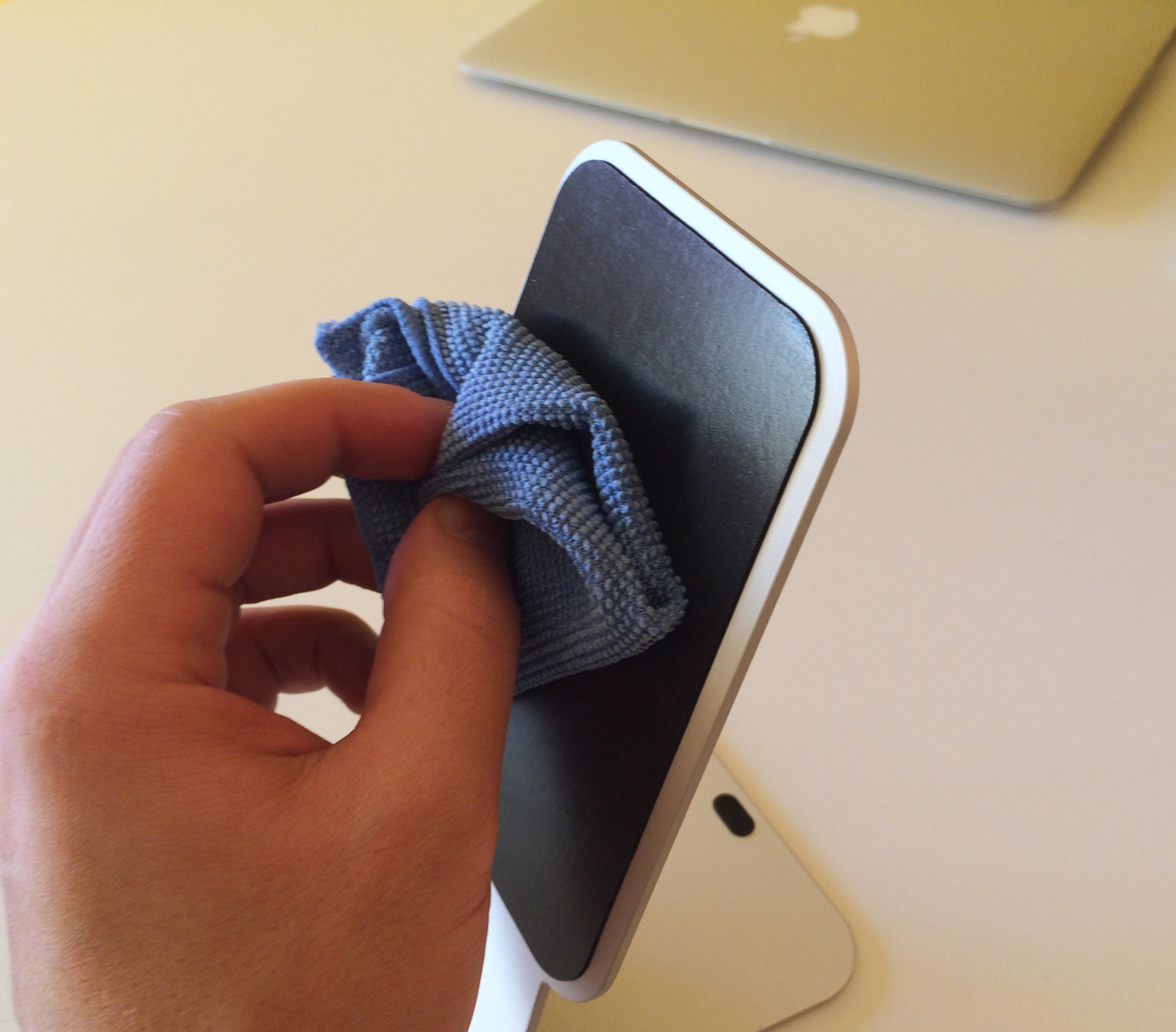 Keep in mind that the Slope is designed for use in moderate temperature indoors because nanofoam melts somewhere around the hundred degrees Fahrenheit, which works out to about 38 degrees Celsius.

Therefore, you’d be wise to keep it out of hot cars and avoid direct sunlight near windows. And should you have issues getting the film covers unstuck from either of the pads, throw the Slope in the freezer for about a minute and they’ll come right apart. 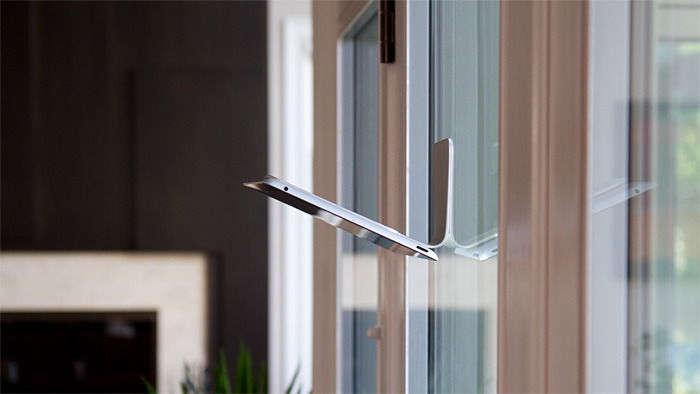 The packaging includes the handy Slope Tips & Tricks card for a quick reminder of appropriate handling measures. As for the pads and nanofoam, the online FAQ claims that the pads are designed to last “for years”.

Your mileage may vary as wearing of the material is dependent on the frequency of friction in the form of sticks and pulls. In their tests, the frontside pad showed some evidence of use and wear after 20,000 solid sticks and pulls over a period of two and half weeks, though it “was clearly far from wearing out”. 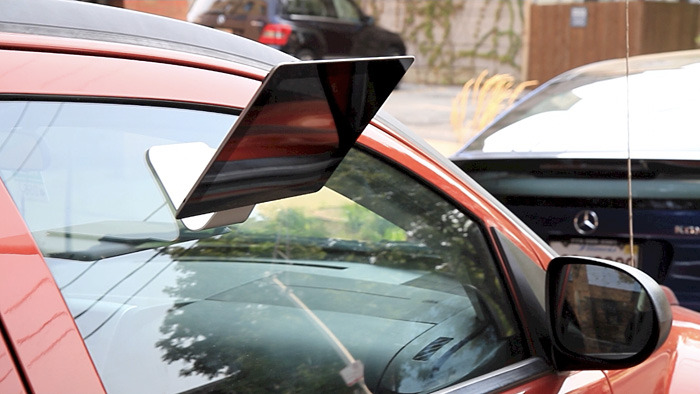 The foam itself is prone to wearing out with a certain degree of use. Also, it can be damaged with sharp objects so you’ll want to keep this in mind. “Good news is we have replacement packs at the ready when it does,” reads the FAQ.

The replacement pads will be announced “at a later date”.

The accessory is designed to work with most Android, Windows, Apple and other tablets which have flat backs, aluminum or not. There are two versions available, one designed for ten-inch tablets and the other for smaller devices with a screen that measures up to eight inches diagonally. 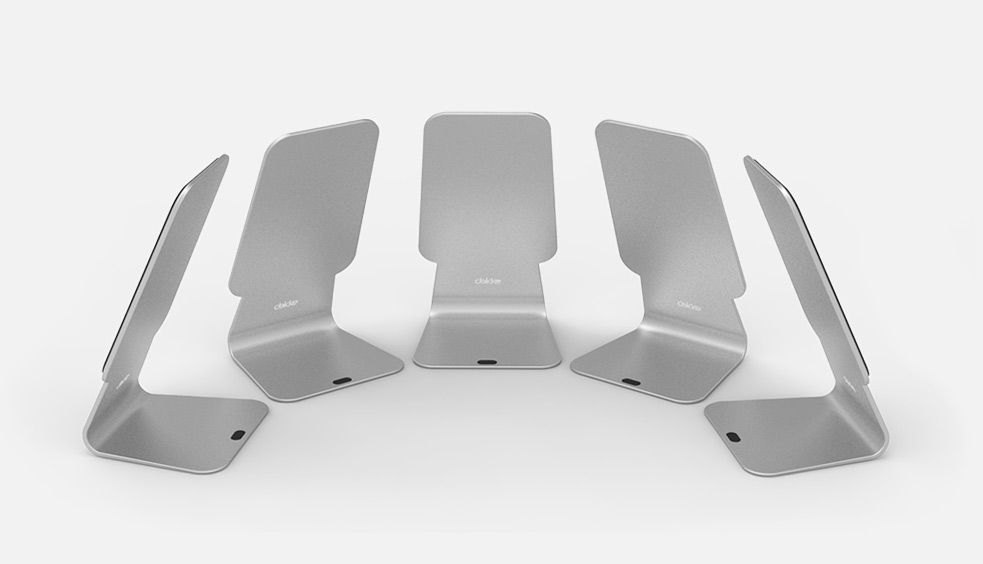 The ten-inch variant of course works with the iPad mini and other smaller tablets, though people who prefer tweener tablets will want to opt for the smaller Slope for the sake of design and elegance.

My only gripe with the Slope is its lack of a rotatable stand. I would love to transition between portrait or landscape without having to pull off the iPad first. 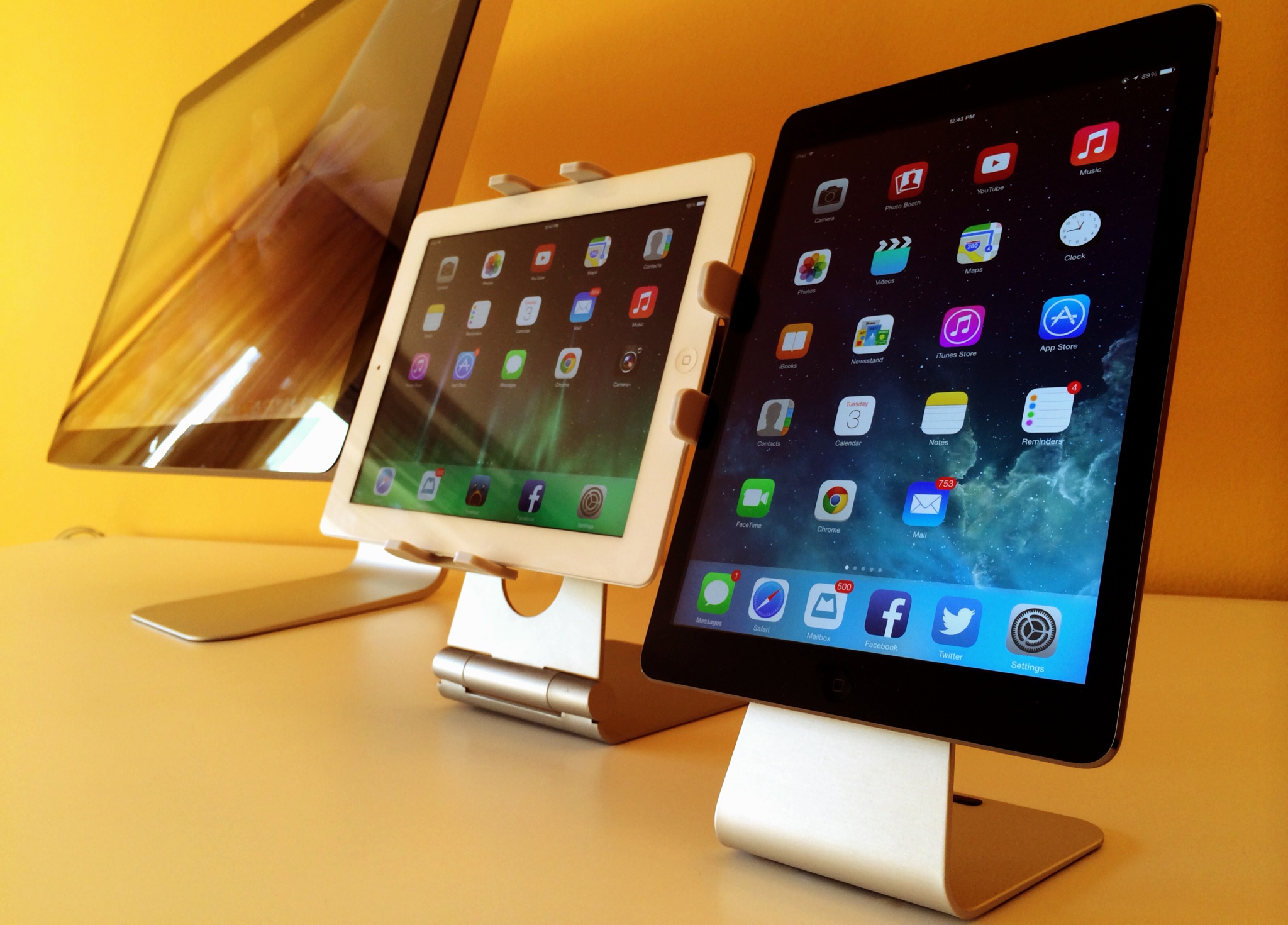 The ability to swivel my device around at angles other than the default 66 degrees would be much welcomed, especially for a perfectionist like yours truly who prefers slanting the device so that it complements the angle of my Mac display.

While this would admittedly require a significant re-engineering of the Slope, the rotatable base with custom angles could be a nice version 2.0 enhancement. In that regard, Erik told me that while he could have designed a swiss army knife loaded with additional functionality, it would take away from the Slope’s minimalist looks.

“The point of Slope is to do one thing really well, hold your iPad up and out in front of you at a fixed angle (one optimized for the desktop/kitchen experience) with an interesting (cool) attachment method,” Erik told me via email. “Who knows, you might see those other things in a future product,” he added.

Compared to the aforementioned Ozaki iCarry Excavator stand which offers great flexibility in terms of angles and positioning of your tablet, or Luxa’s iPad holder with its robotic arm-like grip, the Slope sets itself apart from competition with premium finish, minimalism and overall aesthetics.

The accessory provides a surprisingly secure mount point for your tablet and will perfectly compliment your aluminum iMac or the Apple Thunderbolt Display while offering the versatility of hands-free use and easy access to all of the sides and corners of your device.

I’ve found a number of uses for the Slope. 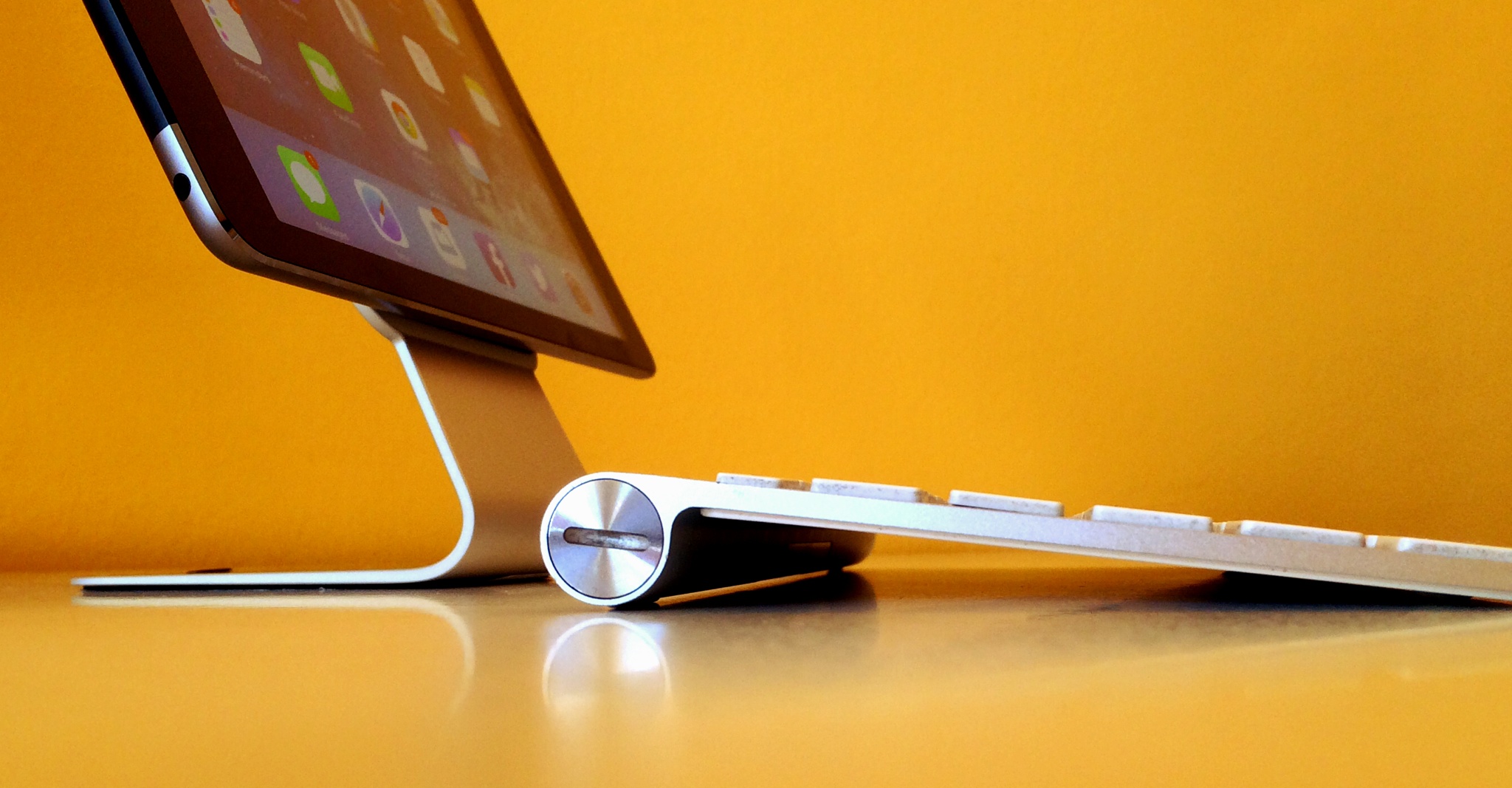 During my workday, I typically have my iPad Air attached to it to function as an extended monitor – I use Avatron’s Air Display 2 ($9.99 Universal) or Shape Services’s iDisplay ($4.99 Universal) to turn an iOS device into a convenient side monitor.

When friends come over, the Slope becomes the perfect picture frame. I’ve been also using it in the kitchen a lot to watch videos of recipes and at my bedside to function as a glorified alarm clock for waking up and a digital radio player to tuck me to sleep.

In my experience, the Slope easily holds its own against similar iPad holders. The accessory is unique in its own right and once you try it out you may never want to look back. For those wondering – yes, you can adhere your iPhone to the Slope, too. 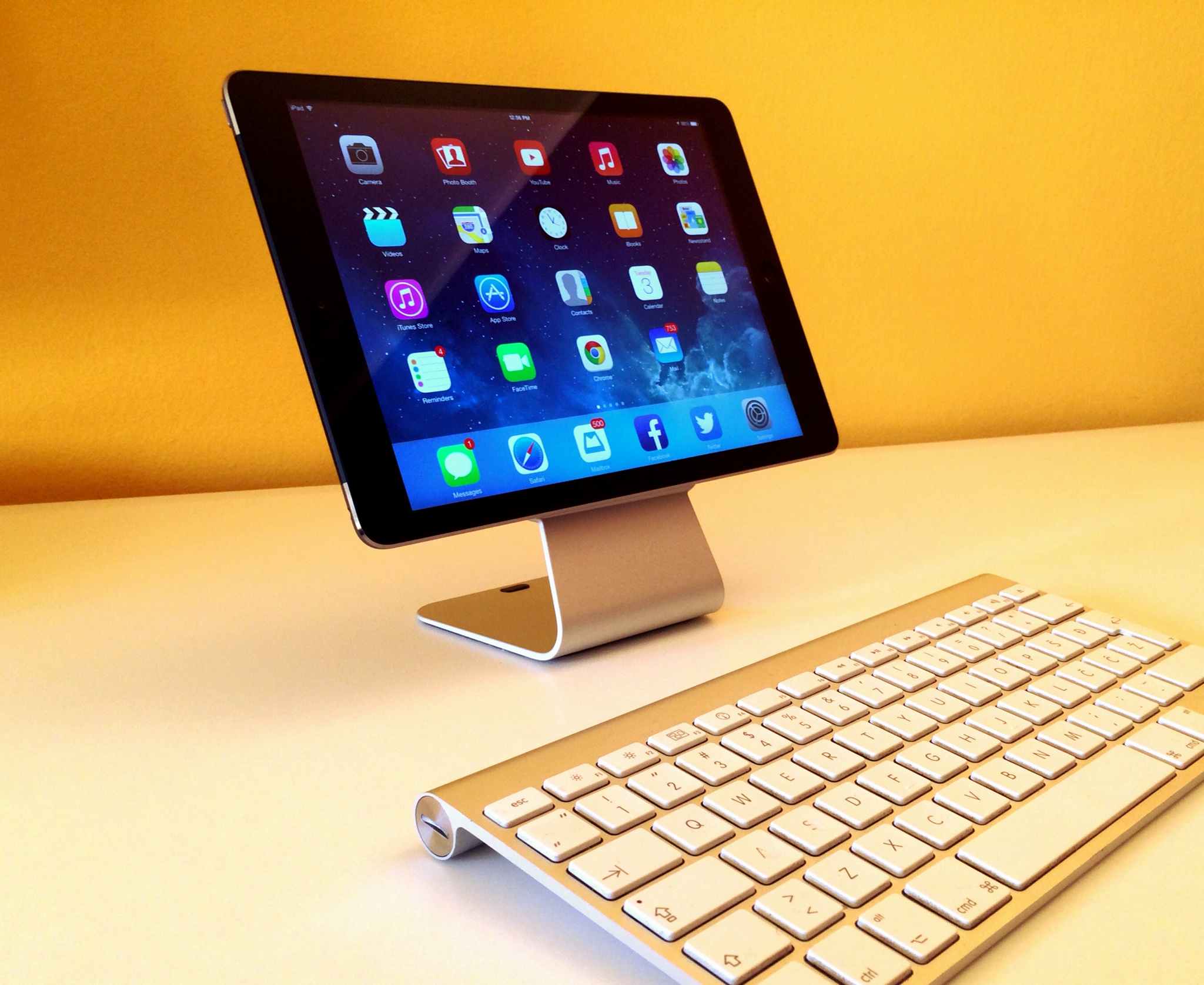 Match made in heaven: the Slope and Apple’s wireless aluminum keyboard.

The Slope for full-size devices retails for $65.

The smaller Slope mini for seven and eight-inchers will set you back $60.

They had a 72-hour sale which has now expired. However, Erik was kind enough to extend the promotion one day for the benefit of our readers so those looking to buy a Slope can now get 20 percent off retail prices until 10pm EST tonight.

To learn more, check out the press release or visit the Dekke website.