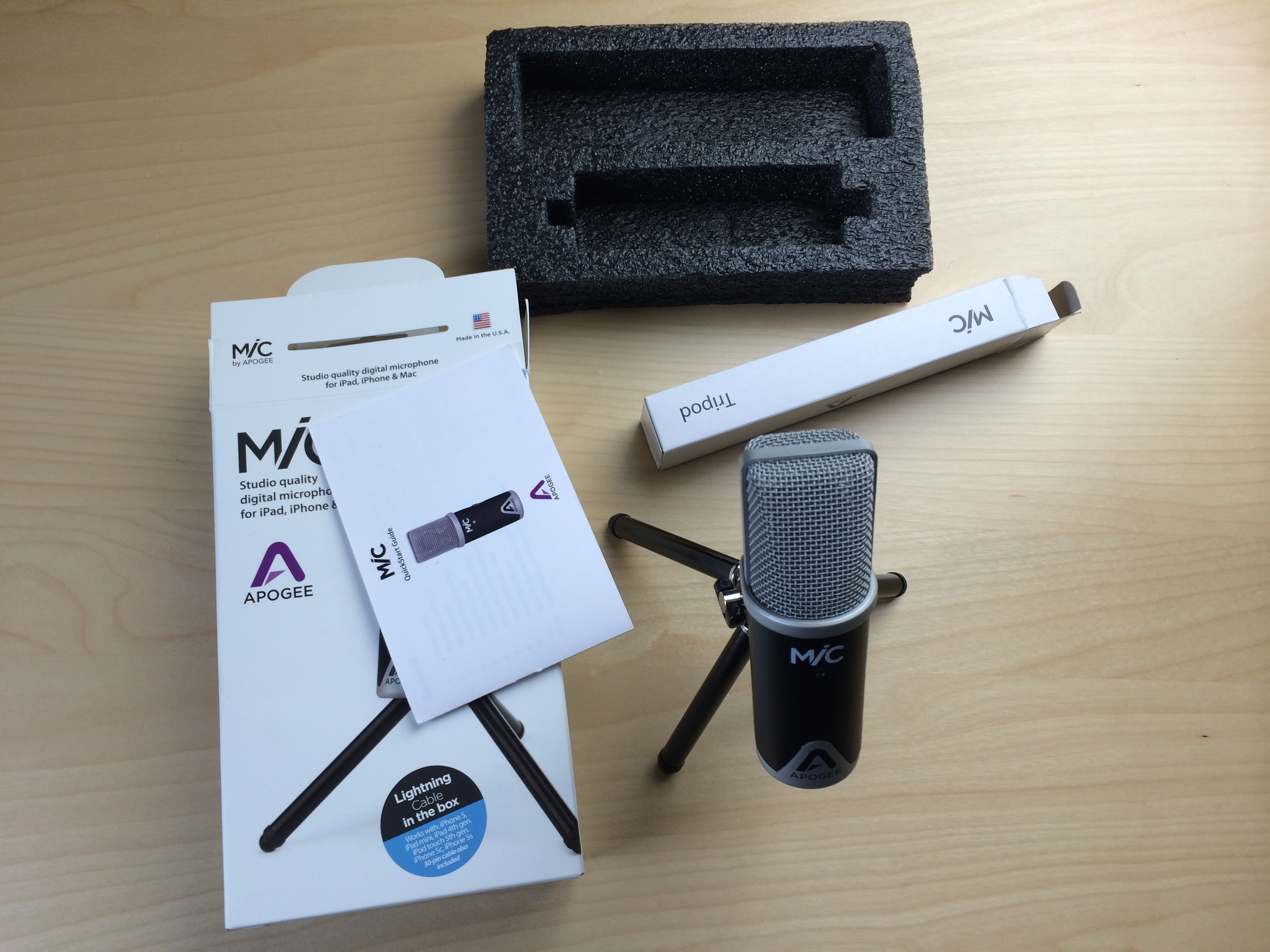 Have you ever tried to record audio from your MacBook on your iPhone or iPad’s built-in microphone? The result is audio that’s serviceable—you can hear it—but the sound is pitiful. Built-in microphones on pretty much every hardware device, whether it be computers, tablets, or even cameras, are sorely lacking from a sound quality perspective. With a minimal investment, you can significantly upgrade the quality of your sound with a decent external microphone.

There are some awesome external microphones for a variety of applications out there, but if you’re primarily concerned with recording on your Mac or iOS device while on the go, there is one mic that should be squarely at the top of your consideration list.

The Apogee MiC is an extremely minuscule external microphone that can make your recordings sound great while traveling. Have a look at our Apogee MiC review and video walkthrough + sound test.

Obviously, there are better microphones available if portability is of no concern to you. For instance, in my daily recording and for podcasting, I use a Heil PR-40. The PR-40 is a condenser microphone with great sound for a reasonable price. It’s perfect for podcasting, because it gives your voice that warm, rich, milky sound.

But when it comes to traveling, something that I do fairly often, the Heil PR-40 just isn’t feasible. First of all, it requires a shock mount and/or stand of some sort. Secondly, it uses XLR inputs, something that would require an external audio interface to talk to the Mac or an iOS device. Finally, it’s big. I mean, it’s not really that big, but it’s much too big to take along in an overnight bag due to its size and the accessories it requires. 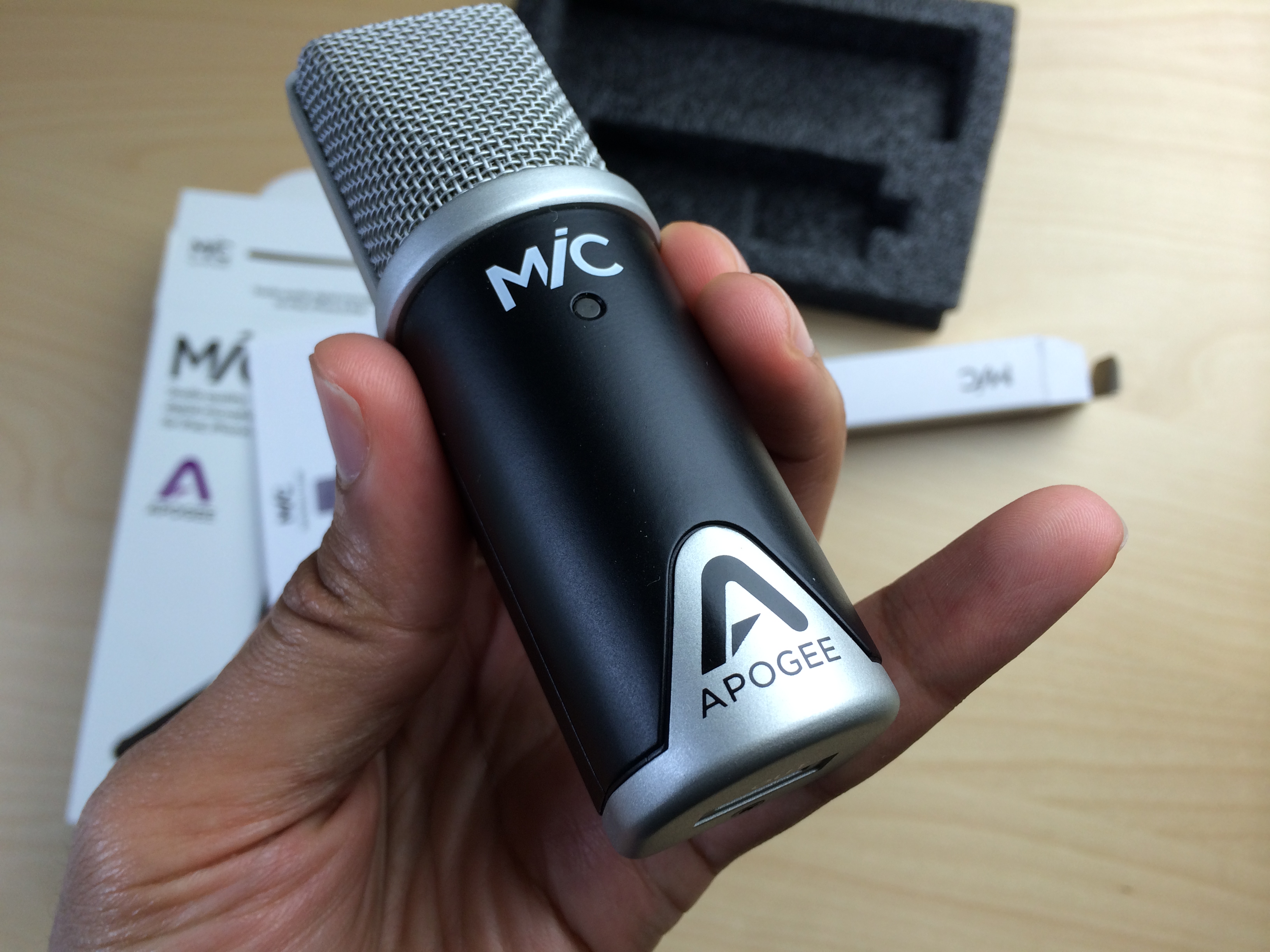 Portability was the main reason I began looking at the Apogee MiC to begin with, and once you hold this thing for yourself, you will see why. The device is extremely small. It’s shorter than the iPhone 5, and can easily be held with one hand. You could fit the Apogee MiC in your jeans pocket fairly comfortably, and while it has a solid build-weight to it, it’s not so heavy that it becomes a hindrance to hold for significant periods of time.

The bottom line is that you’d be hard pressed to find a microphone of this size that features equal or better sound audio quality at this price range. If you do find one, please let me know, as I’d love to try it. 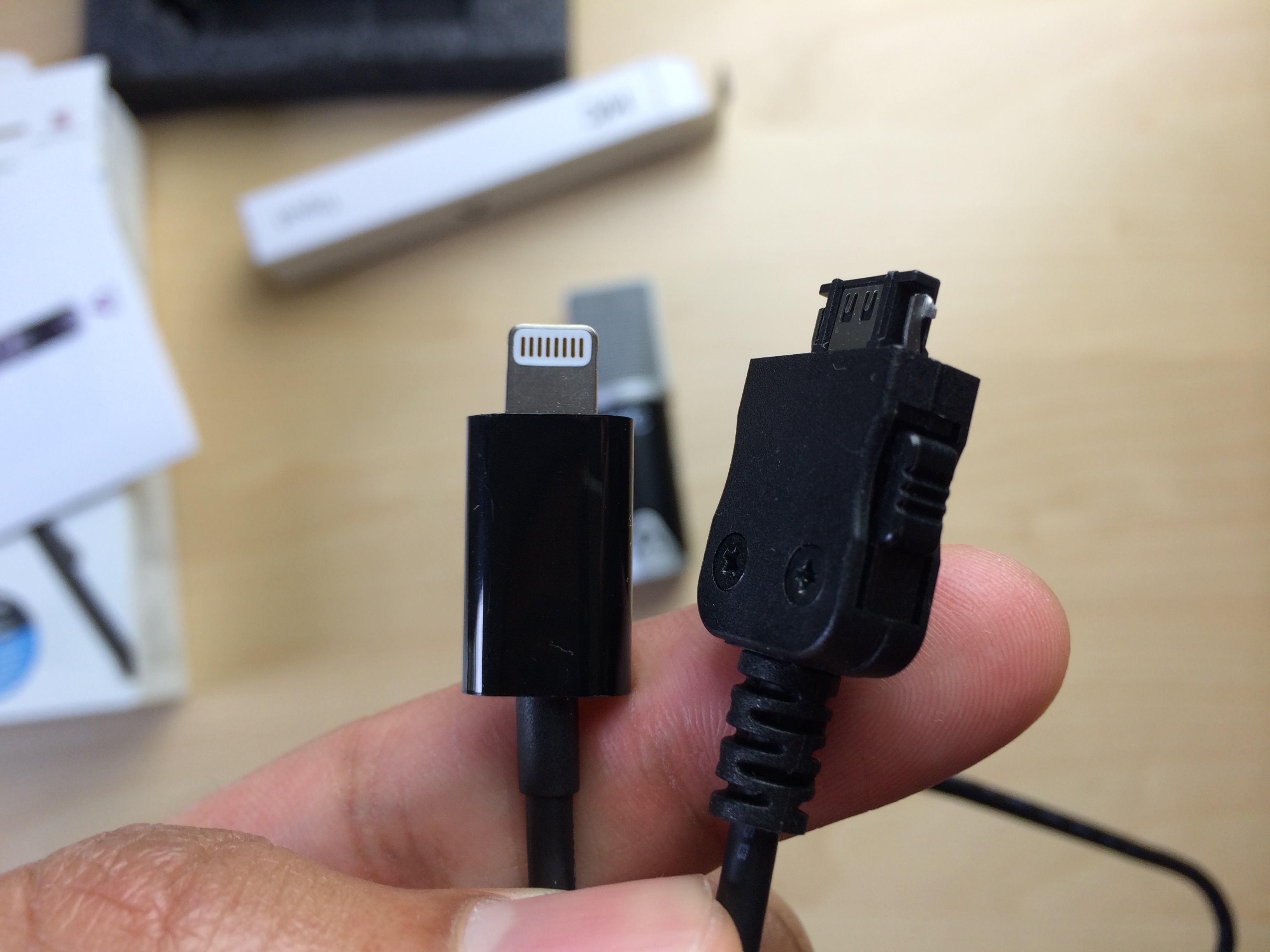 If you’ve ever dealt with Apogee products in the past, you know that these guys know how to put together a package. Opening the MiC is similar to opening a new Apple product, in that the packaging feels well thought-out.

The MiC itself features a standard-sized tripod thread on its backside. This allows you to connect the included bite-sized tripod, or mate the MiC with a more substantial pair of sticks. The included tripod is really small, but it’s solid and features rubber feet to prevent the setup from slipping. 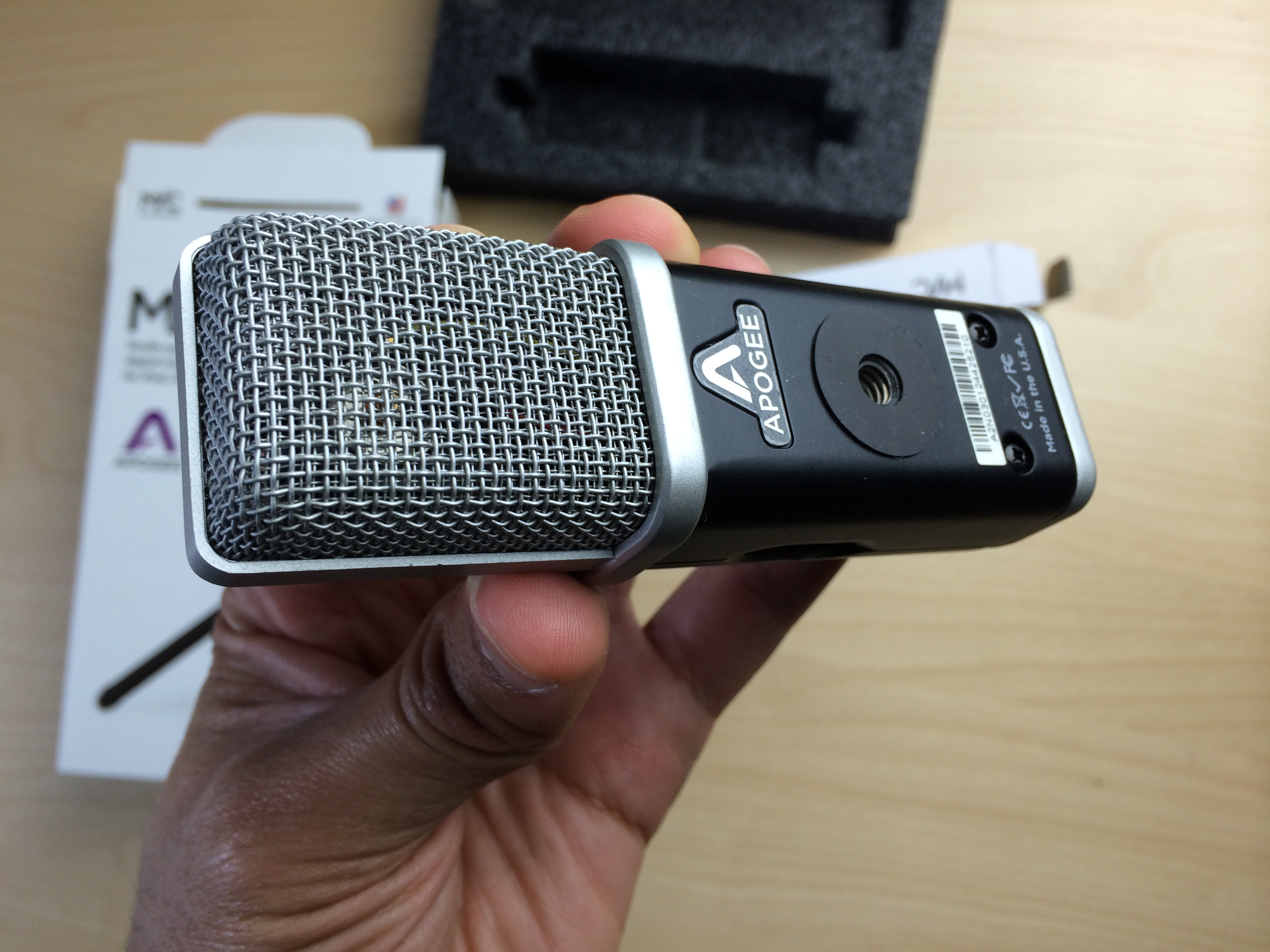 On the front of the MiC, you’ll notice an LED light, which helps identify when the MiC is connected, when it’s ready to record, when clipping is occurring, etc. To reduce input overload or to boost the input, Apogee has included a gain adjustment knob on the right side of the device. 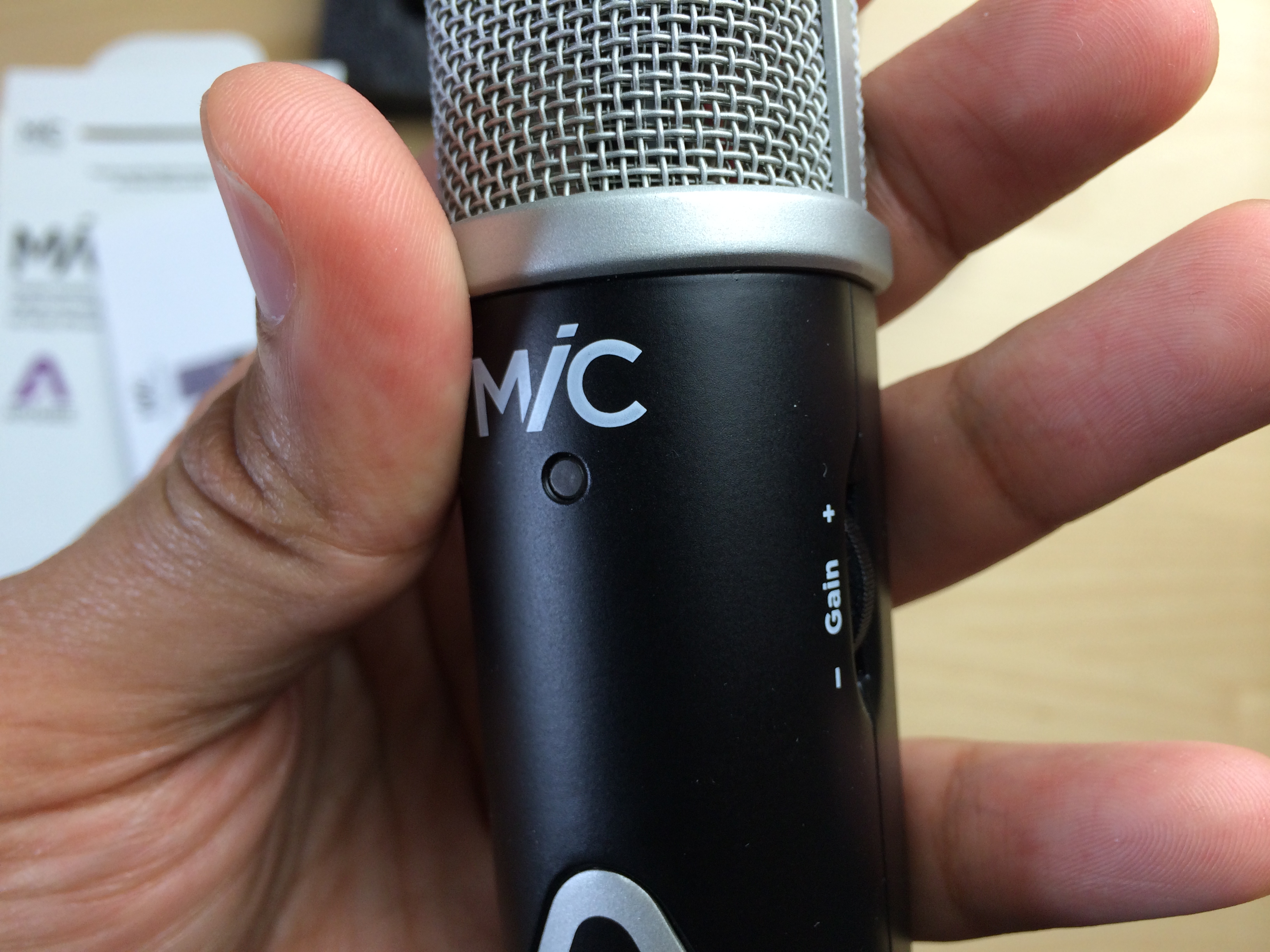 The MiC features a cardioid polar pattern, so it’s best used when recording sounds directly in front of it. This means that the MiC probably isn’t the best device to use when you need to record groups of individuals at the same time. It’s probably too small of a device for that sort of application anyway. 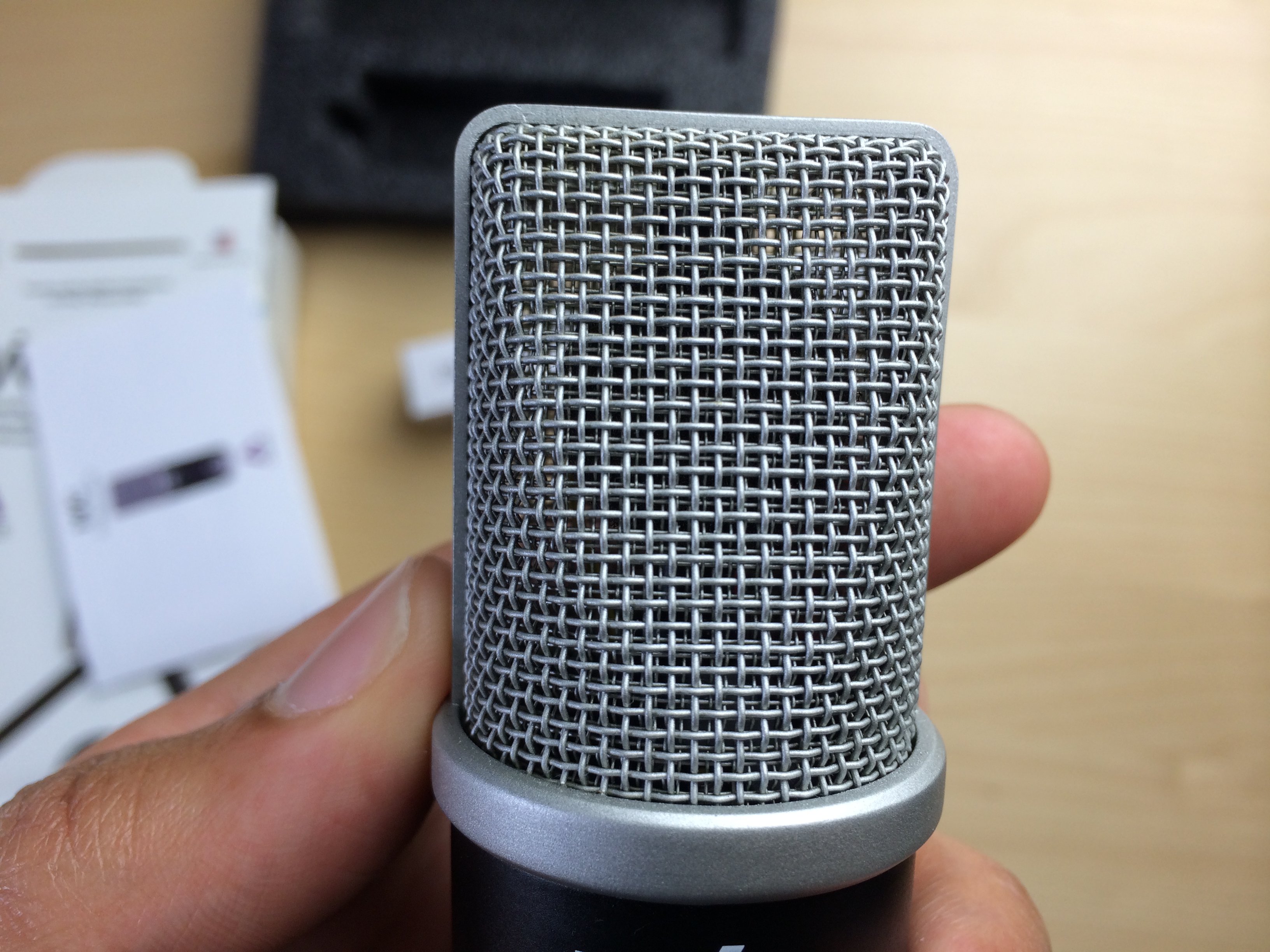 On the bottom of the MiC, you’ll find the device’s only output interface—a proprietary connection that allows you to connect to a Mac, PC, or iOS device. This means that you’ll have to use Apogee’s supplied cable, and if you happen to lose that cable, you’ll need to buy another one from Apogee.  This also means that there’s no built-in headphone monitoring, which, to be honest, is kind of a bummer for people who record vocals for things like podcasts. 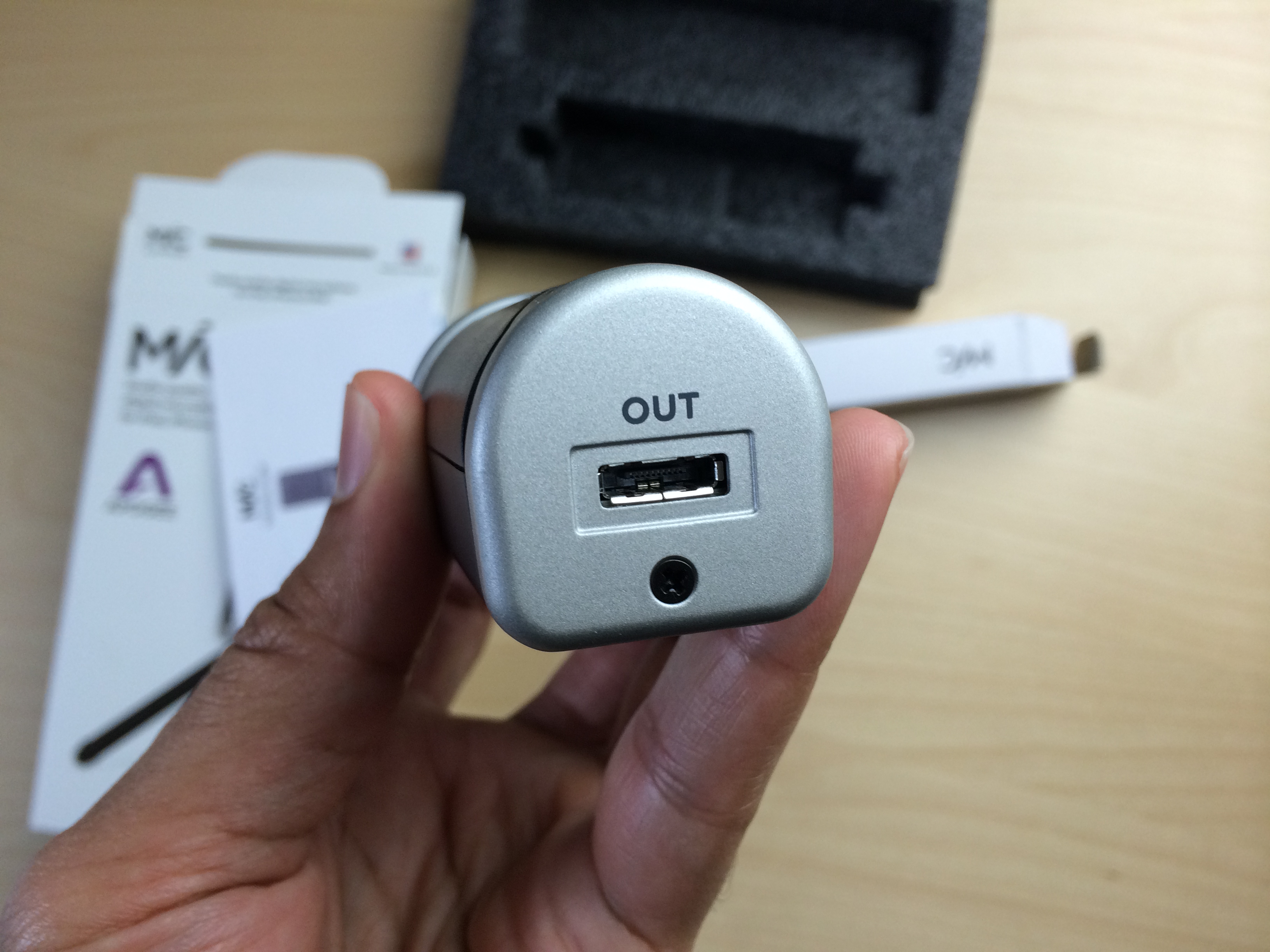 Given the small size of the device, sacrifices had to be made in order to fit all of the hardware into such a svelte package. Besides, although it’s not as desirable as direct monitoring, headphone monitoring can be accomplished via the software.

One of the best things about this microphone is that it works with iOS devices out of the box. You literally just plug it in, launch a supported audio recording app like Garageband, and have at it. The MiC feeds off the power of the device it’s connected to, so you don’t even have to worry about lugging a power plug around.

When I travel, the Apogee MiC is my go-to piece of hardware for recording sound. It’s not something I’d ever use while in the office, because my day-to-day microphone sounds a lot better. But for traveling, and other necessary away-from-the-office experiences, it simply can’t be beat.

Everyone who records audio should always have at least two microphones in their repertoire—your favorite full-sized high-quality microphone, and a portable microphone like the Apogee MiC.

To my knowledge, there isn’t another product that offers all of the conveniences of the MiC—zero configuration plug and play recording, compatibility with iOS, premium sound—in such a small form factor. Yes, there are certainly microphones that sound much better than the MiC, but as I stated before, none of them offer the size and conveniences of Apogee’s diminutive product.

The Apogee MiC can be purchased for $199 on Amazon. Apogee has released a second version of the MiC with 96 kHz/24-bit support for $30 more.

Have you used the Apogee MiC? If so, what do you think about it? If you haven’t, would you consider adding it to your workflow for on-the-go recording? Sound off down below in the comments