There is a lot of different kinds of role-playing dungeon crawl games. One of them is called “roguelike” or “rogue-like” if you prefer proper grammar. In it, players explore procedurally generated dungeons, collecting loot and slaying villains. One of the most important characteristics of a roguelike is permanent death (also know as permadeath). That means if you lose all of your hit points, the game ends and you lose all of your loot. Dead is dead.

Wayward Souls is a roguelike that sets an example for other iOS developers to follow. It is incredibly challenging, full of lootable treasure chests, and when you die, you lose it all…

The graphics looks like the game was built for the Super Nintendo circa 1995. I have to admit, after playing Leo’s Fortune, I am a lot less enamored by the retro pixel style that heavily influences games these days, but I still love the nostalgic feeling I get when I see one with proper homage.

Players explore various levels of randomly generated dungeons from a top-down view. Much of the landscape is shrouded in darkness, allowing for surprise attacks from enemies when you enter a room. Dungeons are not hidden by the “fog of war” (areas are dark until you enter, and then remain lit). Things are just dark all around.

Practically every item on the ground (and on some walls, too) can be smashed to bits using your basic attack. Ideally, a table or candelabra will produce gold or potions, but in this game, loot percentage is very low.

At the start of the game, players can choose their hero from either a Warrior, a Mage, or a Rogue. Once you’ve made it through the Bronze dungeon, you can unlock an Adventurer. The Spellsword is unlocked after completing the Silver dungeon, and the Cultist is available only after you’ve cleared the Gold dungeon.

Each character has different fighting abilities, but all of them are comparable in what they can do. All characters have a basic attack, a defensive move, and a special attack. All controls are the same for each. Move using virtual touchscreen controls on the left side of the screen. Attack by tapping the right side of the screen. Swipe upward on the right for one move, and swipe downward for another. Touch and hold the screen for the special attack.

Before the start of each game, players can pay coins to improve their stats. For example, before you enter a dungeon with the Rogue, you can upgrade your attack so that it costs less energy.

As you find the staircase and reach a new level in a dungeon, the character’s story unfolds and you learn a bit more about why you are fighting against so many hordes of evil creatures. 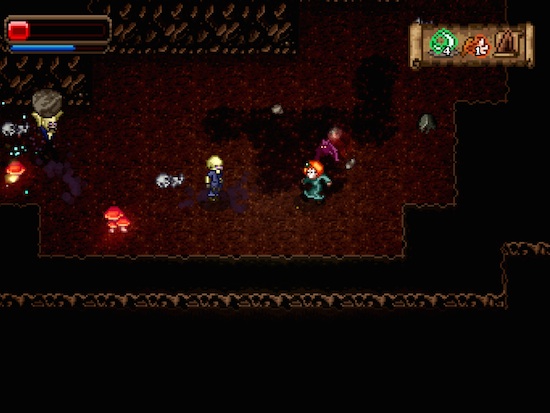 After a short tutorial, players are given the choice of which character they would like to use for their adventure. Each character starts in the same spot (an unlocked cell), but the rest of the adventure is always different, since the dungeons are randomly generated.

Players move from room to room, cutting down everything they can to loot as much gold or potions as possible. Some pathways are temporarily blocked, forcing players to head to a specific area to kill a room full of baddies. Once all creatures in that room are dead, the blocked off passageway will unlock, allowing players to continue exploring.

In addition to throngs of bad guys that you must defeat, many rooms include treasure chests, which yield such goodies as coins, potions, and even special hats (which I have no idea what they do). Different characters will loot different items, but all of them can equip the potions. For example, the Warrior can loot axes from dead bodies, while the Rogue likes the gold. Potions include such things as time-bending, which slows down enemies and speeds up your character, stealth, which makes you partially invisible for 10 seconds, and health, which give a very paltry bit of hit points back.

Don’t rely on health potions to get you out of a jam. There are very few means for regenerating health. The potion, for example, only gives one hit point back. Every time you go up the stairs, you regain a small amount of health back. Purchasing a stat bonus before the game begins can increase that amount, but it is still fairly limited.

That is what makes this game so hard. You are not blessed with replenishable life. You’d be lucky to grab a few hit points on any given level. Rooms are full of enemies that throw, stab, and cast spells, making it incredibly difficult to make it through a dungeon.

So far, I’ve only made it to the fourth level using the Warrior. I prefer his fighting style because he uses a long sword, making it fairly easy to attack without having to get too close. The Mage is decent because she can cast ranged attacks, keeping her at a safer distance from enemies. Unfortunately, she is much weaker, though. So she dies faster. The Rogue is fun, but I was very unsuccessful with her fighting style. Even after spending 400 coins on stat upgrades, I still couldn’t make it past the second level of a dungeon with her. I have a feeling that her special attack is the key to a good game. I’ll keep testing her abilities. 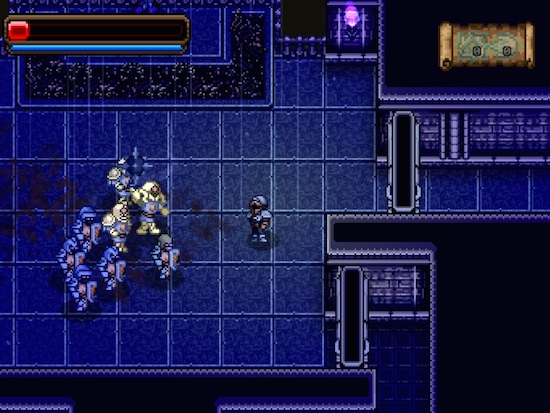 The best part about this game is how hard it is. Knowing that with every hit point you lose you are that much closer to losing everything makes for an exciting adventure. There are three different characters to try out, so you can play with each to decide what your favorite style is.

Characters have limited attack abilities. You can’t move and swing a sword (or cast a spell) at the same time. That means if a monster is out of range, you must move in, risking attack, before being able to hit with your weapon. I’m sure this was a conscious choice, since it helps make the game harder. But I’d like to be able to move into a crowd of undead bad guys, swinging away at whatever is in my path.

Wayward Souls costs $4.99. You probably choked a bit at that price. I know I did. However, this game has enormous replay value since the dungeons are randomly generated. You will never play the same game twice. Plus, the nearly impossible goal of unlocking new playable characters makes it worth going back over and over again.

If you know what a roguelike game is, you should probably have already downloaded this game after the first paragraph. The game is exiting and fun and incredibly hard, which is a big bonus for fans of the genre. If you don’t like the idea of losing everything you’ve earned when you die, you should probably skip this. You might throw your iPhone across the room when you find out that all your hard work is destroyed when you are. This game is available on the iPhone, iPad, and iPod touch. Download it in the App Store today.

My all-time favorite iOS roguelike is Sword of Fargoal. Heroes of Loot is also a great take on the genre.

Are you a fan of roguelike games? Have you already downloaded Wayward Souls?