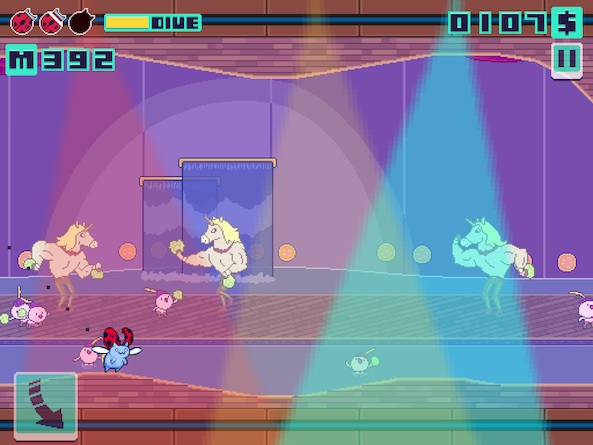 Bravest Warriors is a web cartoon from Cartoon Hangover that was written by Pendleton Ward, the same zany brain that created Adventure Time. Although I am a huge fan of Finn and Jake, I’ve never actually seen Bravest Warriors. That will probably change soon.

Fly Catbug Fly! is the first video game based on the cartoon web series staring its most adorable character. This child-voiced, ladybug-winged cat flies through the air, collecting stuff like skulls, salad bowls, and toilet paper. Help Catbug grab as much as his little wings can carry and deliver them to Impossibear. Don’t worry. I’m just as confused as you are…

Because I have not seen the show, I don’t know the names of some of the worlds Catbug visit, but I do know that some of them are called “Holo-John,” “NeoMars,” “the Forbidden See-Through Zone,” and “the Lavarinth.” Catbug travels between words at random times. Sometimes, he starts in one world and relocates to another within a few hundred meters. Other times, he doesn’t travel until you reach 1,000 meters.

Animation takes place in the background of each world. On one level, strange looking elf-like creatures dance with horses. In another, elk graze in a field. The foreground remains stationary, but is made up of tunnels and obstacles that Catbug must avoid. If you run into the top of a tiled tunnel you will lose a life.

The controls are simple. Tap the screen to keep Catbug afloat. When you let go of the screen, he falls. However, holding you finger down on the screen will send him through the roof. The goal is to keep him flying using a series of taps that keep him right where you want him. The only other control is the dive button, which you can use to quickly send him downward instead of waiting for him to drop naturally.

When you reach the first 1,000 meters, you can unlock “hyper mode,” which I believe speeds up Catbug and gives him a trailing tail. However, I’ve only managed to stay alive in hyper mode for a very short period of time and it didn’t seem like he moves much faster. It is just harder to control him.

When you collect various loot items, which include things like rocks, cookies, toothbrushes, and cans of spray paint, the goal is to dump the goods into the next portal. When you successfully drop off collected loot, you will earn money, which you can use to purchase special items and upgrades, which are just a weird as the rest of the game. 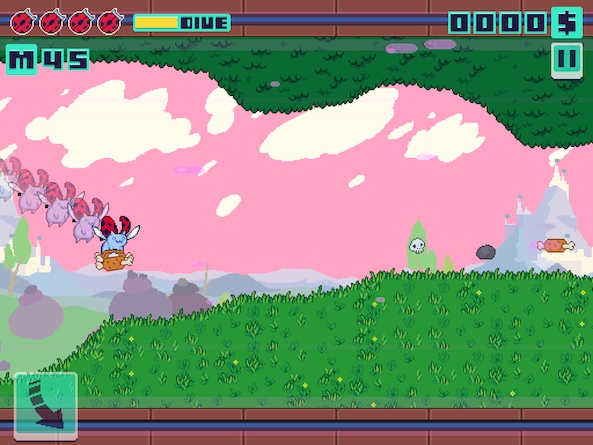 Players control the ladybug-winged Catbug as he flies around, picking up treats. To keep him airborne, tap or touch the screen at intermittent intervals. Tapping too much will send him too high. Letting go for too long will drop him to the ground. Neither scenario is good. Catbug loses one life every time he runs into something. The goal is to collect the goodies while avoiding obstacles.

As you pick stuff up, it will pile up in Catbug’s arms. But don’t worry, it doesn’t slow him down or make it harder to control him. Eventually, you will come across a portal that you can drop the goods into. Maneuver Catbug to the portal and, as he flies past it, the items will disappear and your account will gain some “moolah.”

The further you fly, the weirder things get. You will be transported to different locations that have strange animated backgrounds, like the above-mentioned disco room, a volcanic cave, and even a bathroom. Presumably, these are all worlds related to the show, which really intrigues me.

The money you earn can, and should be, used in the shop. You can unlock other characters from Bravest Warriors, like Chris and Beth, who will be available in the game as pick up items that help you along your path. There are also stats upgrades, like more lives, better dive ability, and larger payouts for longer distances. The power ups give temporary armor, magnets, and invincibility. All of which make the game much more exciting and bizarre. 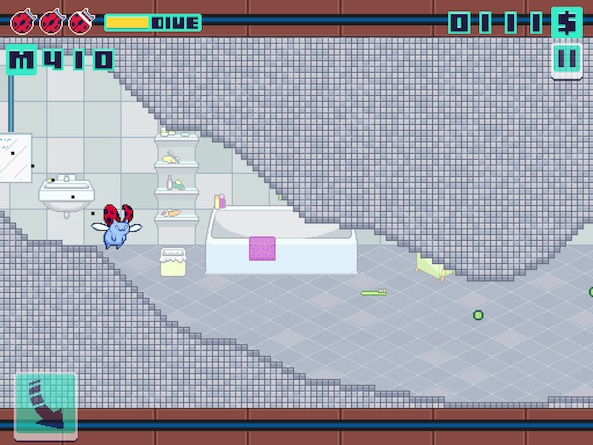 Even though I don’t know anything about Bravest Warriors, I found the game to be fun, interesting, and humorous. In fact, I loved Catbug’s childlike war cries so much that I investigated the show to find out more. I plan on binge-watching Bravest Warriors this weekend.

The way the foreground and background interact with each other is visually confusing. I started to get a headache after an hour of gameplay. Some of the worlds need just a little less animation. I could see this causing motion sickness for some people.

Fly Catbug Fly! costs $0.99. In an era where $0.99 is just as bad as free when it comes to in-app purchases, this game is a nice alternative. You don’t even have to (or get to) buy cosmetic upgrades with real money. The price you pay to download the game is the only money you will spend. The game has a high replay value since every game is randomly generated and you can unlock new items with your winnings.

This is a casual, endless flier type game that requires you to do nothing more than tap the screen. It is full of funny, brightly colored animations and cute sound effects. Fans of the show will probably dig it. But, even if you’ve never heard of Bravest Warriors, the game is still fun for fans of the genre. This game is available on iPhone, iPad, and iPod touch. Download it in the App Store today.

What do you think of Fly Catbug Fly! Are you a fan of Bravest Warriors?