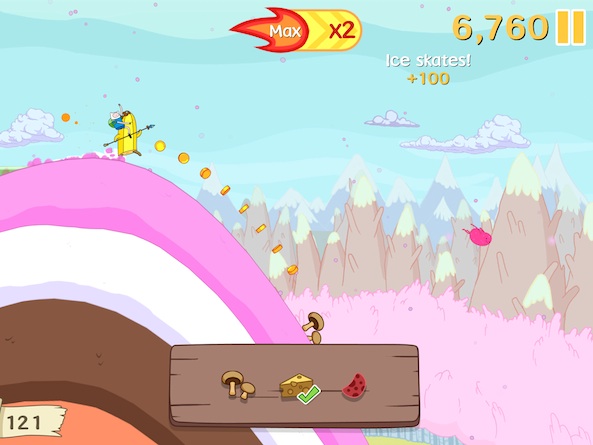 About a year ago, I was introduced to the bizarre world of Adventure Time. I was very reluctant to watch the Cartoon Network show. It seemed too silly. However, I finally gave in and watched a few episodes. I was immediately hooked.

Ski Safari: Adventure Time is an endless runner game that features the unusual characters that pepper the Land of Ooo. It is based on the popular Ski Safari game that has been in the App Store for nearly two years. This version features the Adventure Time sound track, as well as voice overs by actors from the series…

This is a side-scrolling endless runner game where players slide down hills, jump off of cliffs, and take flight on the back of Lady Rainicorn. It is similar to Tiny Wings in that the main character, Finn, must outrun an unseen force (in this case an avalanche of pink goo) by picking up as much speed as possible by grabbing bonus items and performing well-timed stunts.

The cast of characters in this game is impressive. You can play as the heroic Finn, or unlock additional starting skiers, like a Jelly Bean or one of Lumpy Space Princess’ Banana Guards. Throughout the game, you will be able to ski on the back of Finn’s best friend Jake the Dog, hitch a ride in Princess Bubblegum’s cart, and fly across the sky by hanging onto the Ice King’s foot.

The soundtrack is right from Adventure Time’s digital Walkman. The 8-bit song sounds like it is being performed by BMO himself.

As you earn coins, you can use them to unlock additional features, including new slope like Ice Kingdom and Mystery Mountain, costumes for Finn like his “Pa-jay-jays” and his iconic long hair, and fancy thrones like the Ice Throne and toilet-themed Porcelain Throne.

All of this, and there is still a game to play. 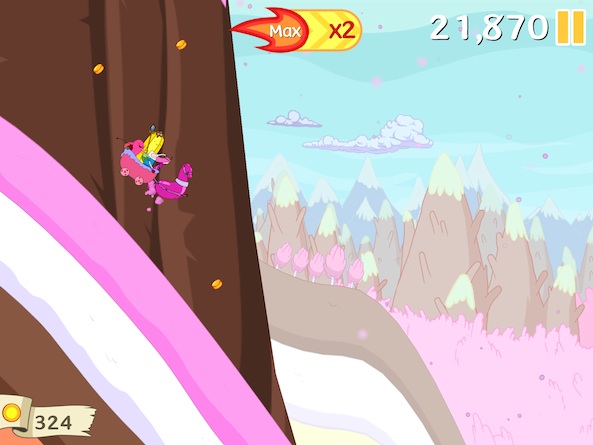 The game starts with Finn (or whichever starting skier you may have unlocked) sleeping soundly in his bed. He is pushed out the front door and smashed onto a boulder, which promptly wakes him up. Then, Finn sets off on a fast-paced downhill adventure.

To stay moving at a steady pace, don’t let Finn run into any obstacles, like boulders or signposts. To jump over something in the way, tap the screen. As long as he keeps moving, he will avoid the avalanche. If an obstacle does stop him, tap the screen rapidly to get him up and moving again.

To pick up speed, have Finn perform tricks. While in mid-air, hold your finger on the screen and he will flip. If you time it right, he will land perfectly on his back and continue skiing. The more backflips you perform, the faster Finn will go.

You can pick up nearby characters that are also heading down the slopes for extra speed and a bit of protection. For example, if you jump onto Jake’s back, snowboard style, and pick up a Jelly Bean along the way, you will fly down the slope faster. If you run into a boulder, instead of face planting, the Jelly Bean will take the hit and you will keep going. If you are in Princess Bubblegum’s cart, you can have multiple characters with you to keep from crashing and burning.

There are lots of different characters you can ride down the slopes on, like the Bear, the Banana Guard, the Ice King’s Penguin, the Wolf, and more. Plus, some characters let you fly for a short period of time. Have Marceline carry you across the sky, soar like a bird on the back of the Bird, take a ride with Lady Rainicorn, and more.

The further you get, the more points you earn and achievements you unlock. The coins you collect on your downhill adventure can be used to unlock the most mathematical items around. 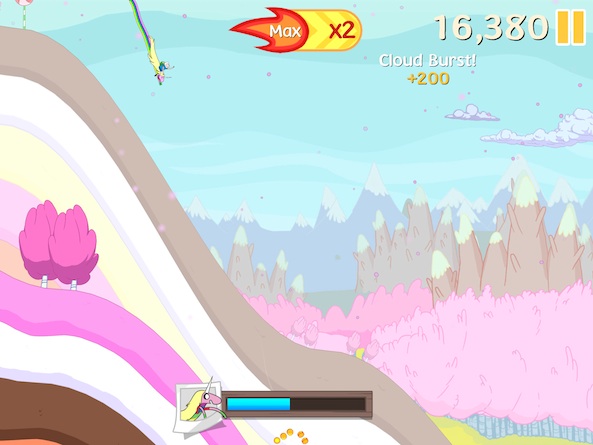 The game is surprisingly fun. I am not the biggest fan of endless runner games, but this one has lots of interesting bonus items, some of which can be stacked on top of each other. So, every run is unique and exciting.

The Adventure Time theme doesn’t hurt either. There are lots of references to the television series for fans with voice acting from the original cast of the show.

Many of the items in the game’s store are fairly expensive. At least the mathy ones are. For example, one of the cheapest costumes costs 5,000 coins. On an average run, I was only able to pick up about 200 coins. Plus, there are a lot of items that cost gems, which are so rare that I never saw a single one the whole time I played the game. This leaves you with a strong desire to spend real money in the game for the cooler cosmetic upgrades, which I will probably end up doing because I am such a huge dork for Adventure Time.

Ski Safari: Adventure Time costs $0.99. That is the perfect price for a game in this genre. It offers hours of entertainment and has a high replay value since no two games are alike. Even though the expensive cosmetic items in the game store might be too hard to pass up for Adventure Time geeks, the in-game upgrades are cheap enough that you won’t spend any additional money on the basic gameplay.

If you are a fan of Adventure Time, this is a must-have game. It features practically everything you love about the oddball television show. It is filled with familiar characters, backdrops, music, and voices. If you like side-scrolling endless runner games, but don’t even know what Adventure Time is, you will still enjoy it for its interesting bonus items and fun game mechanics. This game is available on the iPhone, iPad, and iPod touch. Download it in the App Store today.

Ski Safari is the original version of this themed game. Tiny Wings is a popular side scrolling endless runner that involves hills.