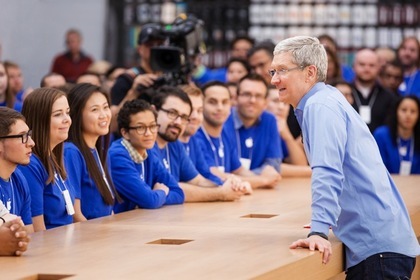 CharityBuzz is running a campaign for one donor to have lunch with Tim Cook, CEO of Apple, at the Cupertino-based headquarters. The donor will have to make the highest, sizable donation, to benefit the RFK Center for Justice and Human Rights.

The lunch donated by Cook himself, has an estimated value of $100,000, with the current bid on Tuesday currently sitting at $50,000. If past charity drives from Cook are any indication, the lunch should blow past the estimated value…

In May 2013, a charity auction for coffee with Cook ended with a whopping $610,000 bid by an anonymous winner. The 2014 lunch with Cook lets the winning bidder bring a guest, and enjoy time with the Apple executive for approximately one hour. The cost of the meal is included, but travel and accommodations are not.

“Bid now on this unique opportunity to have lunch with Apple CEO Tim Cook at Apple headquarters”, the listing says. “Tim Cook is Apple’s CEO and serves on its board of directors. In 2012 he was named a runner-up to TIME’s Person of the Year and topped Vanity Fair’s New Establishment list. Before being named CEO in August 2011, Tim was Apple’s Chief Operating Officer and was responsible for all of the company’s worldwide sales and operations.”

If you win, make sure to ask about the iWatch, okay?