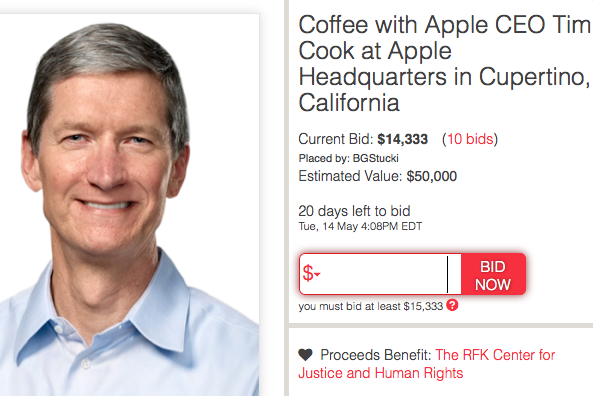 Have you ever wondered how Apple CEO Tim Cook drinks his coffee? Does he take it black, or with cream and sugar? Is he a cappuccino man, or an espresso drinker? If you have a few thousand dollars to spare, you could find out.

TechCrunch is reporting that the Robert F Kennedy Center for Justice and Human Rights, with the help of charity marketing firm CharityBuzz, has just launched an auction that will give you the chance to sit down with Apple’s CEO for a cup of joe and the chance to pitch him your ideas for the next big thing…

The auction began today and has already generated more than $14,000 (less than 10 minutes before the writing of this sentence, TechCrunch reported $5,200). It runs until Tuesday, May 14. Proceeds go to the RFK Center for Justice and Human rights.

If you win the auction, you will be having coffee at Apple Headquarters in Cupertino with Cook, which is an estimated value of $50,000. Is that his per-hour salary? How much time does one get to spend on a cup of coffee with the CEO of the world’s most popular tech company? Some people spend all day at their local coffee shop. Will we be able to bring an iPad so we can read the news while sipping coffee?

At the rate of bids for this auction, it is going to cost someone a pretty penny to have coffee with Cook. The winner probably won’t want to waste any time reading blogs about the man he or she is sitting in front of.

If you had an hour to spend with Apple’s CEO, what would you say to him?